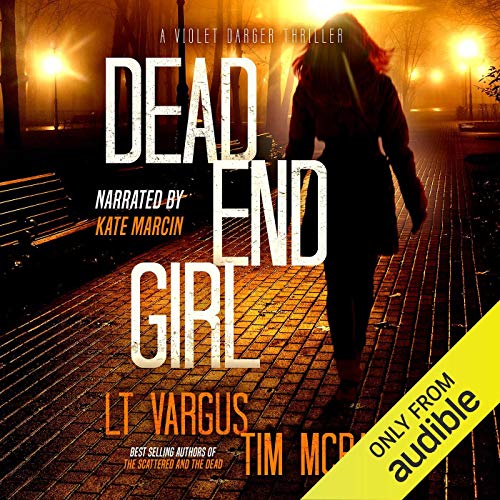 Her body is broken. Wrapped in plastic. Dumped on the side of the road. She is the first. There will be more.

A serial killer stalks women in rural Ohio. He is deranged but brilliant, known only by the grotesque nickname the media has given him - The Doll Parts Killer. The name is apt. He dismembers his victims and leaves them in garbage bags in public places. A residential neighborhood. Next to a roller rink. Behind a Burger King.

The investigation is a disaster. No physical evidence. Unreliable witnesses. To make matters worse, the FBI has lost contact with the star profiler working the case. Now rookie agent Violet Darger gets the most important assignment of her career.

When Darger travels to Ohio, she brings along demons of her own. Her last case ended in tragedy. The death of a 16 year old girl. Darger still has nightmares about the bloody scene, still has panic attacks when she remembers. The trauma shattered her core beliefs.

Now she faces a killer unlike anything she's seen. Aggressive. Territorial. If she fails, more will die. He will kill again and again.

Will this case restore her faith? Or push her over the edge?

The victims harbor dark secrets. The clues twist and writhe and refuse to keep still. And the killer watches the investigation on the nightly news, gleeful to relive the violence, knowing that he can't be stopped.

Not an enjoyable listen

The story was okay, however, the narration detracted from the enjoyment. I found her voice to be very robot-like, expressionless and slow. I wanted to hear the ending, so I ended up setting the speed to 1.3 which helped. I would not recommend this book.

Good Story, Hope for a Series

First off let me say this is not a fast paced action filled thriller. The story is long and has a slower pace with lots of character development. I can see this becoming a series and I look forward to another one if it does. The pace of the book reminded me of a Penn Cage novel. It could have been much shorter but I find I miss the characters after getting to know them. The narrator is outstanding. She handles both male and female voice with, great tone, expression and emotion. I'm glad a gave it a listen.

I enjoyed listening to this exciting story with twists and turns at every corner!

I enjoyed this book thoroughly. The descriptions of gore and what happens to the human body under physical duress or death reads as if written by a pathologist.

The story was good but too detailed, too slow. It could have been cut in half and been a real good story. Too much irrelevant details and feelings and emotions. Maybe because I am a male. Maybe I am to shallow. At times painful to listen to. The narrator is by the way excellent.

This was ok, nothing special. Nothing sucked me in. The performance was great. I liked how the killers voice was always different and I knew it was him from the get go. It was the story itself that was lacking. I always want to know the whys... I don't feel like I got that with this book.

I'd really give this 3.5 STARS but no one let's you do halfs.

What made the experience of listening to Dead End Girl the most enjoyable?

The suspense, and I love books that have a few of couple narrators. Just so we have an insight from the killer....

It was good, I wished so many people didn't have to die.

What does Kate Marcin bring to the story that you wouldn’t experience if you just read the book?

Listening to a book gives you the freedom to listen to it whenever.

The ending, of course.

I will be checking out volume 2 asap. This was an entertaining book with a good twist.

Lots of twists and turns, fast paced. Looking forward to reading more from these authors!

Not your mommy's police procedural

This was not at all what I expected, though I enjoyed every uncomfortable moment! Part cop story, part romance, part horror, and part suspense, this genre-defying story was impossible to put down! The slowly increasing tension, coupled with the sense of dread underlying every moment (even the tender ones) combined to keep the listener riveted to every word. I can't wait for more in this series!

This book kept me engaged all the way to the end. You won’t be disappointed with his read or narration.