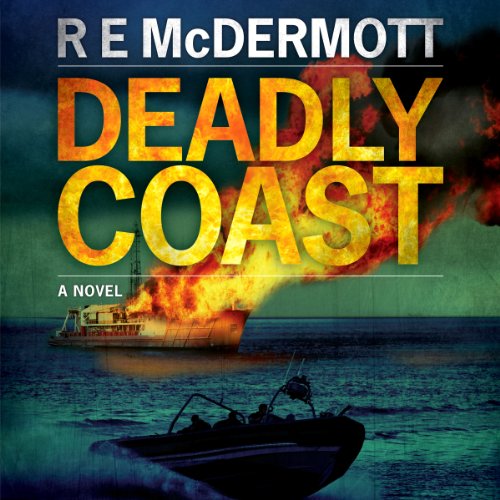 In the wake of his best-selling thriller Deadly Straits, which drew comparisons to Tom Clancy, Clive Cussler, and W.E.B. Griffin, newcomer R.E. McDermott is back with an action-packed sequel.

Dugan thought Somali pirates were bad news. Then it got worse.

As Tom Dugan and Alex Kairouz, his partner and best friend, struggle to ransom their ship and crew from murderous Somali pirates, things take a turn for the worse. A US Navy contracted tanker with a full load of jet fuel is also hijacked, not by garden variety pirates, but by terrorists with links to Al Qaeda, changing the playing field completely.

With a possible link between piracy and terrorism now in play, the US and British governments order the halt of all negotiations for captive ships, and enraged pirates ratchet up the mistreatment of the captive crews. When one of his crewmen is murdered in front of him on a live video feed, a frustrated Dugan takes matters into his own hands and starts his own rescue operation, only to stumble across something far more sinister - a rogue salvage operation for a long lost weapon of mass destruction. Isolated at sea on an old tanker previously destined for the ship breakers, Dugan and his hastily assembled little force of Russian mercenaries find themselves the last line of defense between the world and a terrifying bio-weapon.

Weaving historical fact with speculative fiction, Deadly Coast takes the listener from London board rooms into the very real world of modern day pirates - and their victims.

The book made for an enjoyable trip. Time flew by on the road. Going back to get the first book.

Where does Deadly Coast rank among all the audiobooks you’ve listened to so far?

I have listened to many and put this among the top 10 percent.

Yes. The risks involved and potential loss of key characters was plausible as was the overall premise behind the story.

This is a good series and I would like to see it continued.

Could Not Stop Listening

Would you listen to Deadly Coast again? Why?

Yes. It was a consistently flowing storyline that kept me involved in the book to the point of not wanting to stop listening and to discover the next twist of the plot.

What was one of the most memorable moments of Deadly Coast?

The ending of Deadly Coast, when the pirates were given the two tankers was most memorable to me. It was a perfect ending to the entire storyline.

I liked his ability to keep the storyline moving.

YES! I could not stop listening to it or even go to sleep until I finished it.

Now having read both books, I am convinced that RE McDermott is capable of producing a far better book than Tom Clancy. His books are fast paced and have great plots and storylines. I can barely wait until the next book. I am hooked.

Move over Clive, you have got some real competition with this one. It is a real hanger oner.

Exciting, thrilling that holds you attention

The author and narrator hooked me from the start with such danger and excitement. Tom and Kairouz are partner in a shipping company, their ship is over taken by terrorist group which is carrying much need fuel, what takes place next could mean life or death for so many people. The twists and turns keep you hooked from the start, just as you think things will work out something else sets off a new chain of events. It was has a few heart stopping moments, some cute times but the danger is real.

The narrator does an outstanding job holding your attention giving true emotions, wonderful character voices with excitement and danger you can feel. There are no background noises, no repeating of words, no volume changes just a true exciting listen. I enjoyed his normal voice it is very pleasant to listen to as he delivers wonderful character voice that take you away a thrilling listen on the high seas with pirates, ransoms, and a secret weapon which hold you on the edge of your seat waiting to see what the author has planned for you. I knew who was talking and just what they were feeling. This is the first time I have listened to any of his work and look forward to listening to more of it.

I thought the author did a nice job keeping the listener entertained by making you feel you were part of the story. I had no trouble seeing the pictures in mind as the plot thickens with a little bit of everything. The audio really came alive for me and I am not sure I would have enjoyed it as much if I had read this book. It will be one I will listen to again.

Between R.E. McDermott's writing and Todd Haberkorn's narration you can't find a better team. McDermott writes with the knowledge of someone who knows what he is talking about... From Somali pirates to Russian Mafia human traffickers, his narrative is exciting and scary with twists and turns that take yo to the edge of despair (for the characters) and back again. Todd's ability to bring each character to life with believable accents that allow you to identify with them as if they were a personal friend is unique. Each character comes to life and draws you in emotionally. Be sure to read each book in order to better appreciate the relationships of the characters. I can't wait to see what else this duo will collaborate on next.

Death Below The Waves

Many times we reAd about about biological weapons in vials on sunken ships. The liquid gas in these vials were not what the book said, but one WAS there.

Couldn't wait tonneau the next chapter!

First time for an audio tape, used it to travel 1750 km, last weekend . Bob is such a great author, I really appreciate his limited swearing , instead concentrating on amazing detail which puts you in the situation. Was reluctant to stop and fill the gas tank! Narration with different accents was superb! This is my third novel, and won't be my last! Must read ( or listen)