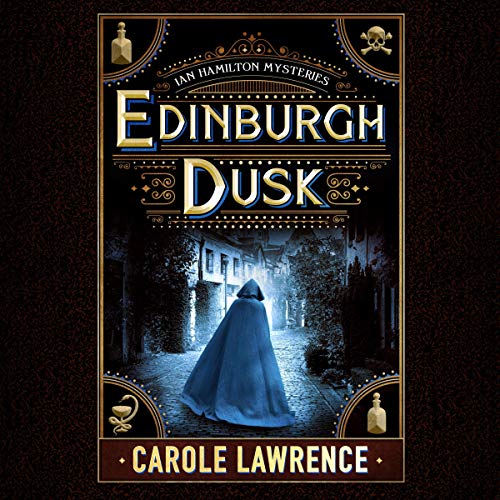 The prize-winning author of Edinburgh Twilight returns to the darkening shadows of nineteenth-century Scotland to track a killer on a profane mission of revenge.

A wicked Scottish winter has just begun when pioneering female physician Sophia Jex-Blake calls on Detective Inspector Ian Hamilton to investigate the suspicious death of one of her patients - a railroad lineman who she believes succumbed to the horrific effects of arsenic poisoning. The most provocative aspect of the case doesn’t escape Hamilton: the married victim’s numerous sexual transgressions.

Now, for the first time since the unexplained fire that killed his parents, Hamilton enters the Royal Infirmary to gain the insights of brilliant medical student Arthur Conan Doyle. Then a second poisoning occurs - this time, a prominent banker who died in the bed of a prostitute. It appears that someone is making Edinburgh’s more promiscuous citizens pay for their sins.

As the body count rises and public panic takes hold, Hamilton and Doyle delve into the seedy underbelly of the city, where nothing is as it seems, no one is immune to murder, and even trusted friends can be enemies in disguise.

It helped me get through a long night at work. I think the plot was better developed than the first, and I liked the added thread about the mysterious death of the protagonist's parents.

Graphic Sexual Abuse in a Stellar Reading by Simon Mattacks

Carole Lawrence’s Edinburgh Dusk deals with fictional but realistic accounts of sexual bullying and abuse. For readers who do not find graphic and detailed descriptions of such practices manageable in their fiction, please be warned. The descriptions of Edinburgh in the late nineteenth century and the use of historical figures for fiction may be fascinating and engaging, for readers who enjoy gothica. Animal lovers may feel conflicted. It’s a challenging listen for the above reasons. Applause and a standing ovation for Simon Mattacks’s superb performance of this book.

The story is very satisfying with many y plot twists and we'll drawn characters (including many historical ones). For me the best part was Mr. Mattacks' recording, which added another dimension to the story.... and it was free with kindle unlimited :) I would also recommend the first book in the series to readers who have not come across it yet.

Hated for it to end!

Having been born and raised in Edinburgh, or Auld Reekie, I was able to see in my minds eye all the streets
And locations mentioned.
The characters were all three dimensional. And the accents done well. I found myself slipping back into my own accent, still there after fifty years in the United States.
While all that was wonderful and nostalgic, having a good story behind it all, wouldn’t have made this as good as it is.
And making me impatient for the next tale of Detective Ian Hamilton. I think these stories will be listened to often and enjoyed again.

Although I found it difficult to listen to the parts about the father molesting his daughter, the story is absolutely brilliant!! Such a great author. Her descriptive abilities are superb, it really makes us, the listener, feel as though we are totally a part of the era the book is written in. Highly recommend it but just be prepared for those uncomfortable scenes between father and daughter.

There are a few graphic descriptions of child molestation. If these kinds of scenes trigger emotional responses avoid this book.

it was a good story, the characters are endearing.

Clever characters. I am wanting a sellers done. PBS want be perfect, with all unknown actor's.

I love this series! Ian Hamilton is flawed but lovable and relatable. The introduction of new characters is proving to enrichen the landscape of the Hamilton clan.
This particular book deserves a warning for childhood assault survivors. There are a few graphic, childhood assault scenes which could be triggering. Fortunately these scenes are short and easily skipped.

Although not a cozy, I am enjoying this series. I do enjoy the historical setting and Edinburgh. Very interesting characters. I don't like it whenever narrators change. I think I liked the first one, even though my American ears couldn't catch everything. Now I'm off to get #3!

This is my third Carole Lawrence book. I have thoroughly enjoyed listening to the story and learning about Edinburgh. To me, it feels as though there are many more mysteries to come. I would enjoy exploring the relationship between Ian, Ronald, and Conan-Doyle. please bring in more. I can't wait! Highly recommend this book and series.

I enjoyed Edinburgh Twilight. It was way too long and the performance was a little over the top at times, but you could at least follow the story because the narrator gave the characters fairly distinct voices. And he did a decent job on the female characters, not like some others.

In contrast, the narration in Edinburgh Dusk sounds pretty much the same whether he’s reading character dialog or descriptive scenes. It took too much focus to figure out whether this was DI Hamilton talking or any other character. I dozed off and woke up just in time for the very disturbing child molestation scene.

This narrator is much better suited for nonfiction than anything requiring a dramatic reading. I was not drawn into the plot, could not follow the action, and just don’t care about the story enough to finish this book. It’s not worth it to me and I will return this for something else.