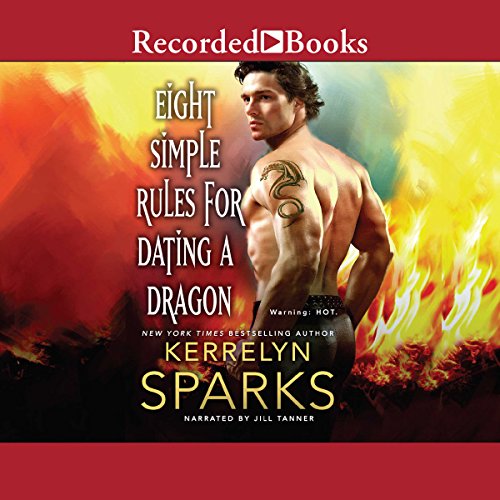 Return to the most exciting, magical and romantic series to come along in years in the stunning world of the Embraced! From the brilliant imagination of Kerrelyn Sparks comes a bold new fantasy romance series in which passion and magic collide.

Gwennore is an Elf able to track down the cause of an illness and heal it - a valuable asset to her people. But when she is thrust into the realm of the dragons, she discovers a haunted place of power and magic, plagued by an ancient curse. And then she meets the smoldering General Silas Dravenko. She's been raised never to trust a dragon, but never did making a deal with the devil feel so good.

Silas has no way of saving the royal family he's served for years. But when a beautiful elf comes bursting into his world, Silas is awakened to desire in a way he's never felt before. But can he trust a sworn enemy?

This has so much potential who doesn’t love dragons!! But it was killed by a plotline that moved like a middle schooler with ADHD. Character only had drama because they couldn’t focus one subject of conversation long enough to resolve the conflict or follow the multitude of clues. Gwen was annoying, I’m strong one moment and then I have to run from everything that doesn’t love me the next. Gwen’s gift is useless so what you can tell what wrong with a person if you can’t figure out how to fix it. Silas was likable but he needed to back up on Gwen and make her come to him because she treated him like crap and was always mad at him for breathing without telling her and just couldn’t admit when she was wrong. I’m skipping Scorchas book because she hasn’t endured herself to me in any of the other books. Hey Scorcha this man is brother, he and you where removed from your parents to protect you, Scorchas response to him is just shitty.
The narrator saved this but she couldn’t save us from hearing “she snorted” 300 times. Is Gwen a damn bull. Nobody is positively described as a person who snorts when they don’t like what someone says , that the characteristics of a judgmental asshole aka Gwen.

I had to fast forward through most of the dialogue between Gwen and Silas. Nothing like the genuine care Luciana had for the Beast despite her fears that he would discover her secrets. Gwen just didn’t show any care for Silas until 90% into the book.

I have read many of Kerrelyn Sparks books over the years, I have liked some of them and have loved most of them. So.... I decided to try one as an audible book. I stopped listening after the second chapter. Jill Tanner has a great voice, and if the character was 35-40 years old I would have loved the narration. Voices mature as people age, the character as written was young, the voice didn't match the age, for me it was jarring and took me out of the story.

The story is good but narration is not so good.

I received an ARC for the first book "How to tame a beast in 7 days" and really loved it. I have been a huge fan of her books and looked forward this series. However, as the series has progressed I find that I am not as excited as I was initially about the audio versions. I enjoy the accent of the narrator but she makes the female characters sound like old women in my opinion. As I listened to this books narration I began to see Gwennore more as an older women then the young, naive beautiful woman that she is. It was that tone that made the book seem long and it felt like it was dragging on. I look forward to Sorcha's book but may have to just read it . Don't get me wrong there is nothing wrong with this narrator again I love her accent but the youth and excitement that I expect to hear in the female characters is just not there.

I struggled to finish this book, the story kept on dragging on and on. I truly dislike the heroine, she was weak and couldn't do any right. Would of have been a great story if there were strong characters and a better fast action. I also didn't care for the narrator.

I just adore the narrator's voice .

Wonderful series so far. I can hardly wait for the next book. wonderful characters that you just fall in love with and the world is so fantastic.

Who knew dragons were sexy beasts!?!

Dragons are basically ugly flying lizards that breathe fire and cause havoc right??? Nope, not in this book, dragons are sexy, pure male beasts that have huge hearts and are amazingly talented in bed! When you mix an elfin woman and a dragon you have an explosive relationship that will have you on turning pages as fast as you can to see what happens next! This series is excellent and I'm not even a bodice ripper romance fan or at least I didn't think I was, but I am now! I can't wait to see what happen next in this series. If you are an audio book fan, the narrator does an excellent job of bringing already well developed characters to life and really ads a bit of personality to the characters and storyline to bring it more fully to life!

I truly love this book! I have listened to it numerous times over and over again!

I am enjoying this series so much. The expansive twist to the overarching drama is interesting. I cannot wait until the next book. The Eight Simple rules for Dating a Dragon was so fun, not to mention exciting, thrilling, heart stopping, sad, and wonderful. "When you ride a dragon, hold on tight." Oh yes! Hold on tight, this is a wonderful rollercoaster ride of a story. The narrator - I am not a fan, but I find her tolerable.

Love the story and although Ms Tanner has a beautiful voice, there really was no difference for each character. It was pretty much just someone reading a book outloud.

As a fan of the authors series the reason is the outline isn’t the same. The female isn’t always the dumb one in the story. The female is portrayed as stupid then one is not. This author give a real life portrayal of a good romance.