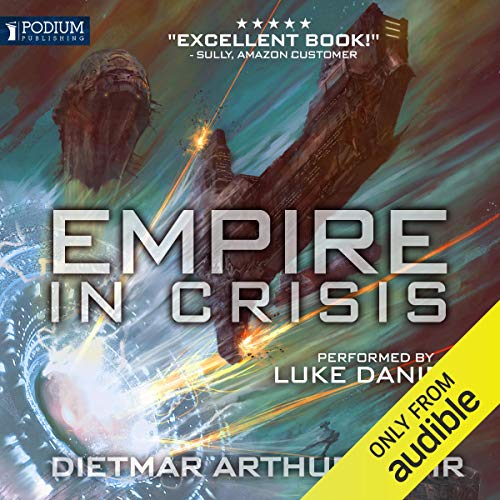 The Empire is a political entity that encompasses hundreds of colonized worlds united by a common language (Esperanto) and under a single individual, the Emperor. But the Empire is getting old and creaky. Its government is riddled with corruption and is choking on red tape. The Space Force is bloated with the incompetent who have risen to high rank due to nepotism and patronage. The Emperor has been assassinated, and the Empire is surrounded by alien races that are becoming more hostile and more powerful as time goes on.

When an exploration fleet in the rift between sections of the spiral arm are attacked by an unknown race, the dead Emperor's clone-son, now on the throne, recognizes that the Empire is standing at the edge of an abyss and must find a way to not only win this new war against the alien aggressors but also overcome the inertia of the arrogant Space Force officers who are more ready to overthrow their Emperor than fight the war.

Where does Empire in Crisis rank among all the audiobooks you’ve listened to so far?

I listened to the Synchronicity War, also by Dietmar Wehr, and decided to download this one as well. Luke Daniels, who also narrates the Synchronicity War, is superb as always. While Empire in Crisis is not my favorite book of all time, it is a very satisfying book. There is the potential for a lead-in to a second book, but as a stand-alone novel, I would be happy leaving it where it is. This ranks in the top 5 out of the last 30 books I've read.

I think my favorite character is Emperor DeChastelaine. Don't be fooled by the title of 'Emperor', DeChastelaine is not an evil tyrant, nor is he incompetent. As far as leaders go, I quite like him. What makes him very interesting to me is how he deals with incompetent space force admirals and political intrigue.

Luke Daniels is one of my favorite narrators. Period. His voices are very unique--even between different book series, a feat I find to be quite impressive.

If you're looking for a repeat of the Synchronicity War, you won't find its looping chronology here. Empire in Crisis is, in my opinion, a good space battle between humans and aliens. Plus, there is governmental intrigue and conspiracy that the humans have to overcome before winning a war. If you're not sure where to spend your next credit, this is a safe buy as it will not force to you to wait for another book, nor will it leave you bored.

As space operas go, this was pretty good. Do some work on character development and interactions

The characters took a little while to flush out and the promotion from XO and Fleet Admiral a little unrealistic but overall this was a good book and an even better first in a new series!

The only down fall I have to say for this book, is that it is not a series as far as i'm aware. Additional political ties, and space opera / space mysteries could easily be tied into the Massive cliff that this book Drove us off at its end. I hope to see other books set in this universe in the future, tho not a continuation per say of this story line directly. Well done.

Another awesome story from DAW

Where does Empire in Crisis rank among all the audiobooks you’ve listened to so far?

I would have to say pretty high up. I am a fanboy of DAW and his other books so that makes me a little biased I suppose but this is a great story that I wish would continue.

The aliens and battles were great as usual. DAW does that really well. I really liked that added political intrigue in this.

I have listened to him in a lot of books. He is really good and can do different accents well. I can also tell his feminine voices from his male voices pretty easily.

Nope, just good space opera, if only in one book.

Would like to see this story continue. There is lots of possibility here for much more.

Very entertaining. While worth the purchase.

This had an excellent premise and it was a well-written book. I found it very enjoyable. I was only disappointed in the quick wrap up at the end. it seems to me that this was originally scheduled to be a multi-book series but ended up being quickly tied up into a single stand-alone book. That being said I still enjoyed it very much.

I really enjoyed the story line. I wish there was more deployment of the bad guys. I an hoping for a second book. There seem to me more unanswered questions