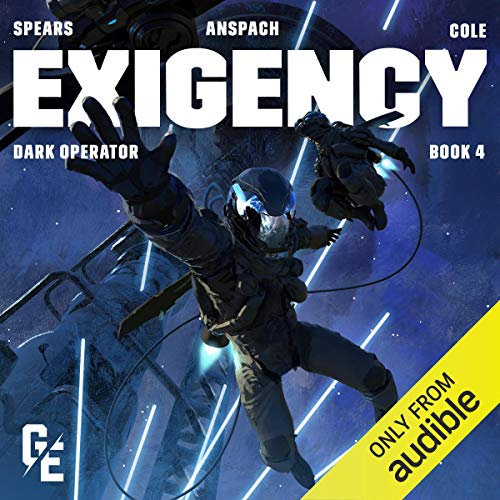 A legionnaire’s only failure is the failure to do what’s right.

Kel Turner is a victim of his own success. His exploits and victories as part of Kill Team Three bring the attention of forces seeking hegemony over the Republic.

These shadowy power brokers know that a man like Kel represents a threat to their plans...unless he can be persuaded to join them. And if the operator declines, his hidden enemy will stop at nothing to destroy him.

At a deadly crossroads, Kel is told to choose between love and duty. But his foes are ignorant that he has a third choice.

The dark operator is the master of all the tools of lethal combat. Kel will need them all to succeed.

Experience the epic fourth installment of the Dark Operator series and join Kel on a desperate, daring mission against an evil that runs deep in the heart of the Republic.

This is Dark Ops

Very excellent. When I started this series this is the sort of story I was looking for. Cloak and Dagger ass kicking. Hoo-ah!

I'm really glad that the legion has gotten in touch with it's feelings, I was really tired of all that KTF stuff. The multiple tears throughout the book had me eating a tub of Rocky road ice cream in my snuggy.
Glad to see the house of reason has put an end to the legion and has an SJW writing their stories now.
-Marine Sniper.

What the Others Should’ve Been...

In the previous three GE spin-offs by Doc Spears I found much to criticize and little to praise. In Exigency, however, the opposite is true. In fact, I’m quite sure Anspach and Cole penned this entire novel. Their style of writing has depth and sophistication, whereas Spears seems to have no understanding of military doctrine, yet alone the story of Galaxy’s Edge. This book is coherent, compelling, interesting, and relevant to the broad scope of the GE universe.
The narration is neither good nor terrible. Stephen Dexter has an unfortunate tendency to overdramatize. He seems to really enjoy both yelling and speaking in little more than a murmur...in the same sentences. It’s really quite annoying. Kindly bring back RC “The Great” Bray.
Highly recommended, despite the questionable narration.

Quite possibly the best in the series so far. Loved it! Do yourself a favor and buy this!

Another Excellent Entry in This Series

I don’t remember why I purchased the first of this series, though I believe it was on sale when I did. I didn’t know what to expect, and was very happy I had. Each of these books have been quick starts, entertaining, and engaging throughout. Walking through the life of Kel Turner has been fun. You WANT this character to succeed. He’s everyone’s hero.

if you like this series, then this book will put a smile on your face. if you don't like this series then I doubt you made it this far but if you are hate reading (listening) then you will hate this one least I imagine. weirdo.
5 stars

Boy this book was great and each one in the series gets better and better. The story is fantastic and the characters are engaging. The action is always enjoyable. Kel is a fantastic hero but all the DO legionnaires are fine characters as well. Highly recommended if you are a Galaxy’s Edge fan.

This was an amazing surprise. The previous books in this series were entertaining as this one seemed to start repeating only to enwrap you in the profound depth this book has. It almost feels like two or three books in one. If that's the case, I'm thankful they opted to combine them rather than break them apart. There's a definite shift in the story that brings the total arc together. Amazingly, I'd argue it's one of the better ones of the entire title series. You'll probably be lost if you haven't caught up so do that first.

Dark ops is one of the best spin-offs from galaxy edge. They keep getting better

This to me is the first dark ops book that gets dark in a certain way. But it works in how it sets up more later.

I gotta say that thia series gets better with every page. I've been around since book 1 of the GE series and never am I disappointed. Love the story and the actor. You guys are awesone.