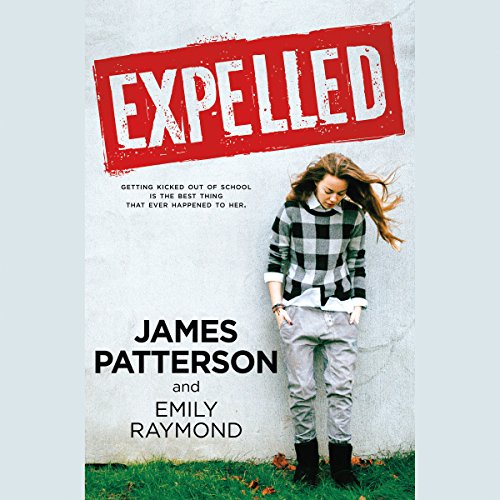 Theo Foster's Twitter account used to be anonymous - until someone posted a revealing photo that got him expelled. No final grade. No future. No fair.

Theo's resigned to a life of misery working at the local mini-mart when a miracle happens: Sasha Ellis speaks to him. Sasha Ellis knows his name. She was also expelled for a crime she didn't commit, and now he has the perfect way to get her attention: find out who set them up.

To uncover the truth, Theo has to get close to the suspects: the hacker, the quarterback, the mean girl, the vice principal, and his own best friend. What secrets are they hiding? And how can Theo catch their confessions on camera?

"Fast-paced and suspenseful...full of humor, romance, loss, and enlightenment. Patterson and Raymond don't disappoint." ( School Library Journal)
"A Breakfast Club-like novel for a new generation, filled with mysteries and twists right up until the very end...fans of Pretty Little Liars will be hooked in this drama." ( Booklist)

The audiobook Expelled by James Patterson and Emily Raymond, narrated by Michael Crouch was one I pre-ordered and was really looking forward to listening! It is the first book I have listened to (read) by James Patterson....shhhh! Don't tell anyone, since I'm probably the only one in the universe who hasn't read every book of his. :-) It was a good listen; the storyline was a tad slow for me at first, but as I got more into it, the pace picked up. The narration was right on. I'm a high school teacher, and I enjoy the YA genre, mainly because I am always on the lookout for books I can recommend to my students. I think teens would definitely enjoy this audiobook because it deals with issues and challenges teens face in today's world. I really liked the ending...it took me by surprise, and I definitely did not see it coming! I'm not really a huge fan of super long books, so the ~6 hour length was perfect for me. I'm looking forward to listening to more audiobooks in the future written and narrated by this talented crew!

Thank you for reading my review. I hope it was helpful. :-)

it was hilarious and very thrilling loved it

I liked it alot, but I feel like the end of the story could have been longer to get more of an "ending" than the quick bit that is at the end

I really liked it. what a crazy story. the twist at the end was worth it

You'll love it, its has a twist. Also read the epilogue its worth it. Trust Me!