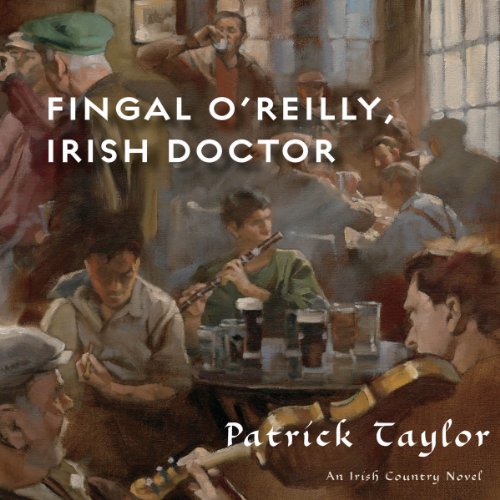 Fans of Taylor's best-selling Irish Country novels know Dr. Fingal Flahertie O'Reilly as the irascible senior partner of a general practice in the colorful Irish village of Ballybucklebo. Newly married to his once-long-lost sweetheart, he's ready to settle into domestic bliss, but there's always something requiring his attention, be it a riding accident, a difficult patient with a worrisome heart condition, a spot of grouse-hunting, or even some tricky shenanigans at the local dog races.

The everyday complications of village life are very different from the challenges Fingal faced nearly 30 years earlier, when fresh out of medical school, the young Dr. O'Reilly accepts a post at the Aungier Street Dispensary, tending to the impoverished denizens of Dublin's tenement slums. Yet even as he tries to make a difference, Fingal's tireless devotion to his patients may cost him his own true love....

Shifting back and forth between the present and the past, Patrick Taylor's captivating Fingal O'Reilly, Irish Doctor, brings to life both the green young man O'Reilly once was and the canny village doctor listeners have come to know and admire.

Loving this audio series!!! Can’t wait to hear what happens next in Ballybucklebo. A rare community.

Full of Irish wit and Wisdom

I enjoyed the Irish Doctor series and thought it was finished a number of years ago. I was pleasantly surprised to discover it is still on going. This book is the first one out after I had stop reading the series.

In this book the author flashes back and forth between the past and present of O’Reilly’s life. Taylor goes back to O’Reilly’s early days just after graduating from medical school. In 1936, he goes to work in the Dublin tenements in a street dispensary (medical clinic). It is here we meet nurse Kitty O’Halloran as they are dating.

Then Taylor flashed forward to when Kitty and Fingal are married and he is a senior partner in a practice in Ballybucklebo in Northern Ireland. O’Reilly has hired a woman physician and some of the patients are balking at seeing a woman. If I remember from the other books, the series ranges in time from late 1920s to late 1950s. I found the section where O’Reilly is participating in a research project with sulfur drugs most interesting.

The book is well written. The characters are unforgettable and Fingal is getting grumpy as he ages. The house keeper Kinky is a delight. The book is ideal for an audio book because of the various Irish accents and words.

I read this as an audiobook downloaded from Audible. The book is almost seventeen hours long. John Keating does a superb job narrating the book. Keating is an actor and an award -winning audiobook narrator.

Another Winner in the Series!

I never grow tired of the books by Patrick Taylor, and narrated by John Keating, about Dr. Fingal Flahertie O’Reilly, the sometimes crusty, often surprisingly kind old doctor who takes care of a delightful group of villagers in Ballybucklebo. He began his career in the poorest area of Dublin, where he met the nurse Kitty O'Halloran, whom he loves but does not marry for the next 30 years.

I cherish the stories that Taylor weaves in and out of his books--and this one gives us a look at the newly married O'Reillys, with contrasting flashbacks between the village where he practices now (at the time of this story--which I think is in the 1960's) and the earlier time in Dublin. If you have listened to all the books up till now, you will feel as though the characters are people you would love living amongst. Taylor's gift is to give what feels like wonderfully thorough depictions of the deep humanness of those who move in and out of these stories--with all their idiosyncrasies and quirks.

Although this is (I think) the 8th book in the series--and it might help to have listened to others, it is not necessary. Each stands alone very well--and I might add, that even within the books themselves, different stories move in and out so that this whole series is somewhat a collection of vignettes about the movements (and ailments) of people who become (or usually remain) very much alive on the pages of his stories. I always feel I have been drawn into the tales in a very satisfying manner.

I have read a couple of reviews that suggest this book is not quite up to the standard of past ones. I don't know--maybe there is some truth to that, but I still love it as much as every past book--and I hope there are many more in the pipeline for readers (listeners) who love them. And I have never read one of these in paper form--so to me, John Keating *is* Dr. O'Reilly and all the others. I doubt I would want to read them, so much do I enjoy his narration!

I usually like Patrick Taylor's books, and look forward to new ones coming out. This book, although interesting in parts to fill us in about the earlier lives of his beloved characters, was generally ho hum. Personally, I thought heavy on medicine, light on character storyline (I prefer the latter). Very good narration inspires the reader to hope for another book in the series, soon.

Another excellent book in the series

The stories of this little village are wonderful and the narrator does a superb job of all the voices of the people in the village. I hate it when the story is over and always watch for the next one. I would recommend these books for everyone who wants a great story and great characters. John Keating is the perfect narrator for these books, he brings the characters to life. I can hardly wait for the next book!

I loved all the characters for different reasons.

The book on a whole was terrific. I could never pick one scene.

Who was the most memorable character of Fingal O'Reilly, Irish Doctor and why?

The main characters, Fingal, Barry, Kinkie....just to name a few.

Another great book, full of Irish culture and Hist

Same wonderful characters and rich description. This one is a little lighter on storyline, but that's not really why we're reading these books anyway.
It is a very good read.

Good background to Dr. O'Reilly's early days going smoothly between then and his present.day practice, All the usual characters and the odd new one with Arthur Guinness and Lady Macbeth still making their amusing appearances. Good pace.

Performance masterful and the story was a charming escape. I enjoyed the entire series with excited expectation which was met with each new book.

Easy Enjoyable Read and/or Listen to

I have enjoyed all of the Irish Country Doctor series thus far. Start with the first book if you can.

...a feel good story supported by very good narration. I am looking forward to the next book.