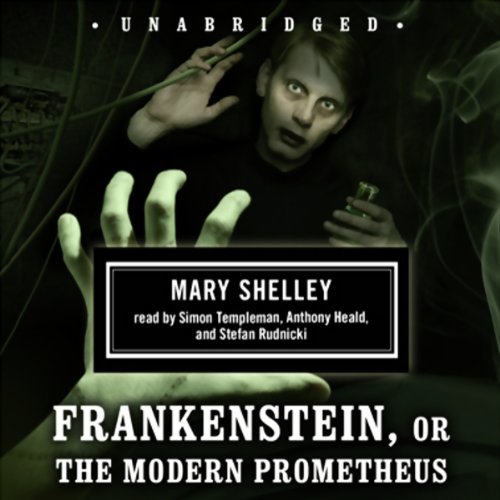 Frankenstein, or The Modern Prometheus

Frankenstein, or The Modern Prometheus

Dr. Victor Frankenstein, an ambitious young scientist, is consumed by a fanatic desire to create a living being. He fashions an eight-foot-tall creature and succeeds in animating him, but, horrified by his visage, perceives his creation to be a monster and frightens him away. The monster, wandering in search of human companionship, is spurned and repulsed by all he approaches and learns to hate and to kill. He confronts his maker with a terrible choice: unless Frankenstein creates for him a mate, he will go on a rampage of destruction.

Frankenstein, a masterpiece of 19th-century Gothic horror and considered to be the first science-fiction novel, is a subversive tale about the corrupt tendencies in humanity's most "civilized" ambitions.

If you're looking for the closest thing to an Original 1818 text of Frankenstein by Mary Shelley and need it for scholarly purposes, then this is the Audiobook you've been looking for! Can't stress this enough. Audio is very true to the text and I've spent well over 2 hours trying to find the exact right one. (you are welcome).
Outside of needing a specific version of the story, this is the truest edition out there that I could find. Why settle for a re-telling of the story when you can experience the Imagination and world Mary Shelley incepted now 200 years ago!

What's a Lonely Creature to Do?

The three readers are well-suited to their roles. Simon Templeman is sensitive and vigorous as the frame-narrator, the idealistic and lonely explorer Walton, Anthony Heald is fragile and feverish as the self-pitying, obsessed, and played-out Frankenstein, and Stefan Rudnicki is baritone and bare as the rational, wronged, and vengeful Creature.

And what a fascinating, nightmarish, sublime, melodramatic, elegant, and surprising novel it is! Told by letters and interviews and by narratives inside narratives, glossing over the science and diving into the morality of the creation of artificial life, exploring the glories and dangers of the heroic (and tragic) quests for knowledge and discovery, expressing the best and worst of human nature, laying bare the sadness of loss and alienation. If, at times, I feel like slapping Frankenstein out of his self-centered wallows in guilty misery, the Creature's autobiography is compelling, and the scenes on the Arctic ice are terrific. And Mary Shelley often effectively builds up and then thwarts or shocks reader expectations. The novel has little in common with most movie adaptations of it, but it is well worth listening to so as to experience the source of so much popular culture Frankenstein material, as well as a representative example of the Romantic era.

I have to read this book for a college class and decided to listen to it first. I must say that the narration is excellent and does more than justice to the text. The storyline was good and I'm really looking forward to actually reading this book.

Gothic at it's best

I've been reading and loving modern gothic books for several years. When looking for my "next book", I thought why not go to the original goth? Like so many others, I have heard about Frankenstein and seen the various movie adaptations but never actual read the original by Mary Shelley. WOW! I was not disappointed! This is an amazing book, simply amazing! The narrators do an excellent job of bringing this story to life.

Where does Frankenstein, or The Modern Prometheus rank among all the audiobooks you’ve listened to so far?

One of the best

The story is gripping, but the quality of the voice actors was most impressive.

The narration of the monsters time at the cabin with the old man.It made me rethink all of the hollywood stereotypes of the monster

Who was the most memorable character of Frankenstein, or The Modern Prometheus and why?

The monster by far. The monster in the book is nothing like the horror films depict. He is much deeper and more complex.

It's amazing to think that Mary Shelly wrote this book when she was 19. The book is fantastic, it well narrated and acted. I had wanted to read this book for some time now and I'm glad I did.
The story takes across Europe and onto the ice bound barrens of the farthest North. The depths a man's sorry to the peaks of his triumphs.

Don't miss this one.

I personally don't enjoy fiction, but I had never read the original Frankenstein before now. This is truly an amazing story and the delivery is done very well by the voice actors. A must read for sure.

This is undoubtedly a classic tale that has stood the test of time. It is a must read, or listen, because the influence of this book can still be seen today in popular culture. The narration was done by a small team and they each gave their characters a feel and life of their own. Well done Blackstone Audio.

If you're expecting a lumbering monster with green

What made the experience of listening to Frankenstein, or The Modern Prometheus the most enjoyable?

Because of the age of the book the language is a little Victorian, it was easier to follow along while listening, or even listening while reading than just reading alone.

Who was the most memorable character of Frankenstein, or The Modern Prometheus and why?

Frankenstein is the name of the monster's creator, not the monster himself, and I was totally surprised that Frankenstein could work so hard to create the monster and then be so repulsed at the result when he succeeded to bring him to life. I'm still amazed he seemed to feel he could tell the monster to go away never anticipating problems or accepting responsibility. Crazy.

It's a much better book than any of the movies - although it was kind of funny that the movie Young Frankenstein sometimes wasn't all that far off. :)