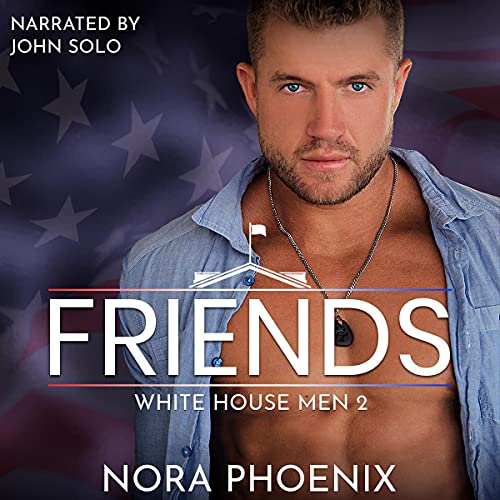 Seth is so confused. If Coulson is straight, why is he checking Seth out?

Seth is an out and proud Secret Service agent. When he’s asked to assist the FBI on an investigation, he meets FBI agent Coulson.

Coulson is straight. Or so he says. Seth has no reason to doubt that, not even when they become close friends. Really close friends. But that’s all they are: friends.

Until Seth finds himself checking Coulson out a little too closely - especially certain over-sized body parts - and notices Coulson doing the same to him. For someone who’s straight, Coulson shows a lot of interest in Seth’s dating life, his preferences, and his hook ups. Could it be that he’s not so straight after all?

Meanwhile, every discovery they make in their investigation leads to even more questions. Who’s really behind the assassination? How did they pull it off? And most importantly: What are they planning next?

Friends is a friends-to-lovers romance that begins with a slow burn friendship but ends in high steam. The White House Men series is a romantic suspense set in the White House. Like what would happen if The West Wing and The American President had a gay lovechild. Each book has a new love story with a happily ever after, but the suspense plot ends on a cliff-hanger and will be continued in the rest of the series, so the series needs to be listened to in order. Strong TW for a detailed description of terrorist attack.

New couple, but continuing story and investigation. So good and intriguing. I enjoyed seeing the couple start off as friends and growing closer and falling in love. Wonderful! Highly recommended.

Super happy there is minimal delay between audiobook releases in this series. They have been thoroughly entertaining so far. On to the next one!

Possibly the best narration I've ever heard. The story is romantic and fun, and will leave you wanting to read the next book in the series right away. Strongly recommend!

Seth and Coulson just fit together. Their minds work in similar ways and it helps them develop their relationship quickly. Coulson seems to be ready to accept himself. It doesn't feel unrealistic but more about someone being self aware and ready to look at his life in different ways. I also like how both men are honest with their supervisors and not willing to be ashamed of themselves or their relationship.
I listened to the audio version and loved it very much.

Would I listen to it again: yes ✔
Did the story keep me engaged: yes ✔
Was I invested in the characters: yes ✔

📖 Story comment: Good pace and well written characters.
There are so many things I enjoyed about this book especially the way the friendship developed between Seth and Coulson. And bonus's were the gay s*x conversations between Seth and an awkward Coulson that were adorable 🤣, Seth's family seeing Coulson needed time to find his feet and Seth's dad laying down the law with his (adult) kids about it was epic!.

🎧 Narrator comment: I enjoyed John Solo's narration and think he's done a good job narrating Friends. Each character had their own voice and it was easy to tell them apart, he has good timing, inflections and intonations and it all worked to bring the story to life.

I loved everything about this book, from Nora Phoenix wonderful writing style to the amazing characters and storylines she created to fabulous and perfectly casted narration performed by John Solo. I recommend reading and/or listening to “Press” the first book in the series before starting this one, Nora Phoenix laid down the foundation for the ongoing storyline that will play out over the entire series, a political crime drama/mystery, an ongoing investigation starting with a terrorist attack at the NYC Pride Parade and another incident five years later at the White House, a terrorist group, Al Saalihin, claims to be behind both attacks. The investigative team consists of members from several agencies and includes Seth from the Secret Service and Coulson from the FBI, former NYPD works in the NY office, both Seth and Coulson were at the NY Pride Parade bombing and are familiar with the case. Coulson and Seth hit it off right from the start, they work well together and get along great. Seth finds himself attracted to him in other ways but Coulson is a straight man, he is also a curious man and is not afraid to ask questions. He starts second guessing his past love life and has thoughts wandering to an alternative love life. Seth starts to think Coulson be even be pan or bi, but he has to wait until Coulson realizes it himself. I loved how everything played out in this book, the ongoing storyline is cleverly plotted, it is a fact finding investigation that uncovers some interesting details, I am looking forward to where it will lead and who is really behind the attacks. The friends to lovers romance is beautifully plotted, it is a slow burn romance but once it ignites holy moly it is hot, strait-laced Coulson did not know he had it in him. Nora Phoenix thank you for another awesome novel, I am loving this series, the characters and storylines are awesome.

🎧📚🎧 John Solo continues to deliver a stellar performances as he brings these characters to life. He is awesome at portraying each character, giving them their own distinct voice and personality, each voice perfectly suits the character he is playing. He performs the dialogue naturally and with ease, switches roles effortlessly without missing a beat, his pacing and inflections are spot on too. John Solo is an entertaining storyteller and a pleasure to listen to. Thank you for another awesome listen🎧