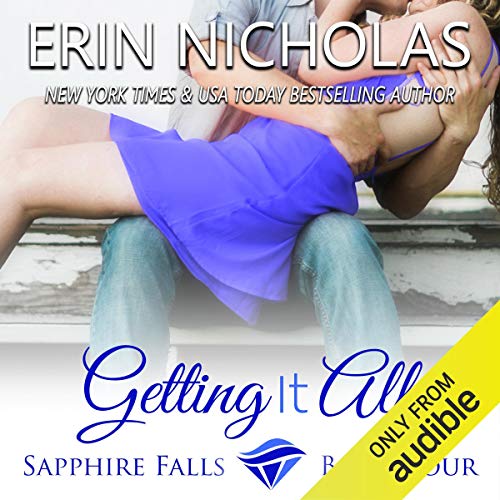 It's Tucker Bennet's turn to fall in love!

There's nothing like summertime in Sapphire Falls, and Tucker Bennett is looking forward to hosting his best friend's four young sons for the next three months. This is their first trip to Tuck's farm since their father's passing, and he's fully prepared to step up for the boys. He's also thrilled by the instant attraction to their aunt Delaney.

He's only ever wanted three things in life - his farm, a wife, and kids. He's already got the farm. Now it looks like fate has delivered the rest in one complete just-add-dirt-bikes-and-a-new-puppy package.

Delaney Callan is beyond grateful for Tucker's help while she catches her breath from becoming a sudden surrogate mother to her nephews. And she's not immune to the sexual tension bouncing between them. But with all her focus on not screwing everything up with her nephews, there's no time for a relationship, especially with marriage-minded Tucker. Of course a casual summer fling is something else. After all, it would be a shame to waste a perfectly good barn....

Casual is the last thing Tucker wants. He's set on taking care of Delaney and the boys, while she's determined to prove she can go it alone. But she didn't count on Sapphire Falls, the adorable little town filled with the loving, impossible-to-ignore Bennett family, well-meaning friends, and everything four little boys could ever wish for. What's Delaney to do when the most impossible-to-ignore Bennett of all shows her the difference between what she needs and what she wants...and he turns out to be both?

If you're a fan of booze, bonfires, proposal-inducing pastry, and using hay bales as a horizontal surface, this story is for you.

Ce que les auditeurs disent de Getting It All

I'm really enjoying this series! I can't wait to read more books by this author.

Delaney was as close to her sister and brother in-law, Rafe, as anyone could possibly be. So when her sister was tragically murdered and shortly thereafter Rafe passed away from cancer she became guardian of their four boys. She promised Rafe that she would take the kids to Sapphire Falls for the summer as they went every summer.

Tucker was Rafe’s best friend and he has always spent time with the boys when they returned to Sapphire Falls ever summer. Rafe had always believed that he and Delaney were a perfect match and after meeting her he was starting to believe that as well.

All Tucker wants to do is look after Delaney and the boys but Delaney needs to prove to herself that she can look after them on her own. A relationship ensues however she wants to keep it casual and he wants much more. Will she realize having others help doesn’t make you weak before it is too late?

I loved this story as it has all the feels and it is always great to catch up with the other residents of Sapphire Falls. The narrator did a great job of bringing the story to life.

This one was predictable but was still a good listen. I enjoyed the book anyway and it still had a few little surprises.

Tucker has been looking for “the one” forever and all he wants is to settle down and have a family. Delaney is trying to get over the death of her sister and brother-in-law and figure out he life raising their four boys. I enjoyed watching Tucker learn that he doesn’t need to do everything for Delaney and Delaney learning just because she accepts help doesn’t mean she is taking the easy way out. This was another good Sapphire Falls story.

How do you know you're destined to be with

When your best childhood friend dies from cancer. His only request is for you to take care of his sister in law and his four boys.You think he's crazy till you meet her

Good with one but...

Nothing drives me crazy more than a character that refuses help because they want to do 'it' on their own... even to the detriment of 4 children and going against the wishes of the kids deceased parents. That took a 1/2 star away from my review.

Remove that portion and for me, this was an excellent story with amazing characters.