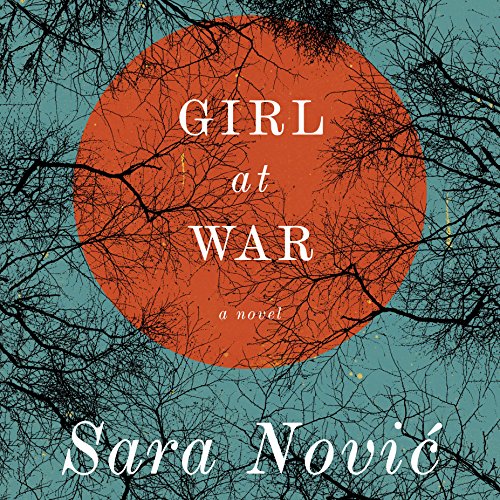 For fans of The Tiger’s Wife and All the Light We Cannot See comes a powerful debut novel about a girl’s coming of age - and how her sense of family, friendship, love, and belonging is profoundly shaped by war.

Named one of the best books of the year by Bookpage, Booklist, and Electric Literature

Longlisted for the Baileys Women’s Prize for Fiction

Zagreb, 1991. Ana Jurić is a carefree 10-year-old, living with her family in a small apartment in Croatia's capital. But that year, civil war breaks out across Yugoslavia, splintering Ana's idyllic childhood. Daily life is altered by food rations and air raid drills, and soccer matches are replaced by sniper fire. Neighbors grow suspicious of one another, and Ana's sense of safety starts to fray. When the war arrives at her doorstep, Ana must find her way in a dangerous world.

New York, 2001. Ana is now a college student in Manhattan. Though she's tried to move on from her past, she can't escape her memories of war - secrets she keeps even from those closest to her. Haunted by the events that forever changed her family, Ana returns to Croatia after a decade away, hoping to make peace with the place she once called home. As she faces her ghosts, she must come to terms with her country's difficult history and the events that interrupted her childhood years before.

Moving back and forth through time, Girl at War is an honest, generous, brilliantly written novel that illuminates how history shapes the individual. Sara Novic fearlessly shows the impact of war on one young girl - and its legacy on all of us. It's a debut by a writer who has stared into recent history to find a story that continues to resonate today.

Praise for Girl at War

“Outstanding... Girl at War performs the miracle of making the stories of broken lives in a distant country feel as large and universal as myth.” (The New York Times Book Review, Editor’s Choice)

“[An] old-fashioned page-turner that will demand all of the reader’s attention, happily given. A debut novel that astonishes.” (Vanity Fair)

“Shattering... The book begins with what deserves to become one of contemporary literature’s more memorable opening lines. The sentences that follow are equally as lyrical as a folk lament and as taut as metal wire wrapped through an electrified fence.” (USA Today)

“[A] gripping debut novel... [Sara] Nović, in tender and eloquent prose, explores the challenge of how to live even after one has survived.” (O: The Oprah Magazine)

“Powerful and vividly wrought... Nović writes about horrors with an elegant understatement. In cool, accomplished sentences, we are met with the gravity, brutality and even the mundaneness of war and loss as well as the enduring capacity to live.” (San Francisco Chronicle)

“Intimate and immense... [Nović is] a writer whose own gravity and talent anchor this novel.” (The New York Times)

I had higher hopes for this. It fell a little flat for me. There were gripping scenes and at times it almost felt like a memoir. But overall, I found myself wanting to read or listen to something else.

A perfectly timed departure from the predictable template.

Girl at War shouldn't pass you by. The horrors of the 1990's Balkan Crisis, set against the breathtaking beauty of the land, give bittersweet memories of her past that is far removed from Ana's new life in America, where comfort is taken for granted and war is something folks watch on TV.

The will to survive, despite having every reason to surrender to the fate of her mother and father, is Ana's story. Love, fear, hesitation and uneasy rediscovery are mixed into a nostalgic reunion that takes place when Ana returns to see the remains of her childhood. Perhaps the only thing that has stayed the same is the connection she shares with Luka, the boy she left behind. As young adults, Luka and Ana set off together on a journey to find the past that had previously been set aside in Ana's mind.

Sara Nović masterfully unwinds this story of survival. Don't pass over this book! It is haunting and beautiful in every sense of the word.

On Growing up and Finding Home

This book is difficult to review, even as I read it quickly and swallowed it whole. I grew up in Canada, and am about the same age as the fictional Ana. While I never could understand her need to hide her heritage from her American classmates, teachers, and anyone else, it did make sense in the way of a teenager and preteen.
Julia Whelan is a narrator I've heard of but not explored much. She handles this book nicely, though her male characters have frustratingly low tones that don't suit her well. But her dialogue was polished and emotive, and does carry Ana's character nicely.

This book tackles very difficult subjects of homecoming, of war, of innocence lost at an age where you desperately cling to whatever innocence you have left. It's a difficult read, as war books should be, but it is by no means violent for its own sake. It is hopeful and shattering and frustrating and resilient... maybe it was meant to be this way.

Very nicely delivered story and beautifully performed. Highly recommend it. It is the safest way to learn what it is to be a child in a war.

This novel tackles the very difficult subject of a child caught up in war and displaced from her native country. Unfortunately, more topical than ever. Sara Novic writes beautifully, authentically, and on a personal and urgent level--depicting not only the experience of war on the ground in a stunning and accessible way, but love of family, culture, friends, the joys of childhood and confusions of young adulthood--that drew me in so fully I listened to the entire book in one day. Rare for me. The book on Audible is performed with several voices delineating each character and was easy to follow without the text. Read this book. It matters.

I found Novic's novel to be emotionally moving, and reasonably well paced. The writing itself was decent, but room for improvement. Overall, I thought the book was good.

We are humans with the greatest and weakest in us. Biology plays a role, environment makes the difference. The circumstances outside of our control are hard to acknowledge as we want to believe that our will plays a more important role, than it actually does..

I found characters well developed, very realistic, events to be very probable, the cultures presented from multiple points of view, and learned quite a bit about myself and others. The torturous events were not extravagantly emphasized, but then they did not loose their power of hurt and understanding. The kindness of people was not elevated to sainthood, but also was not minimized. This book is a reminder that not everything depends on us, but then something does depend. It helped me to understand the impact of certain experiences.

I was impressed with author writing. The books reads easily, but the vocabulary is quite rich.

Yes, I would recommend this audiobook. The reader gave voice to each character. The scenes were vividly presented by the author. I was engaged in the book 'til the end.

What was one of the most memorable moments of Girl at War?

Some of the most memorable moments were in Part 3 when Ana went to the village near where she'd last been with her parents.

Who was the most memorable character of Girl at War and why?

Ana was determined, smart, and thoughtful. She continued to be a loving person throughout the horrors of the war.

Sara Novic writes with such descriptiveness that it took me away to another place and time. This is what I love about reading! The characters were well developed. (I even had my favorites.)The story was touching and it left me wanting to read a sequel! I can imagine this book as a movie or tv series that would do well. The reading was great, as her usual. This reader is one of my favorites.

Sara Novic writes of war in Croatia that is tentatively settled by the dismantling of Yugoslavia in the early 1990s. In a personal 22-day visit to five of the six countries, a Croatian guide tells our small group of travelers that he does not offer a trip to Serbia. He explains his father was killed by Serbian soldiers in the Croatian war.

A little history gives perspective to our guide’s and Novic’s story. After WWII, Yugoslavia is set up as a federation of six republics to be ruled by one leader, Josip Broz Tito. Though Tito is considered a dictator, under his rule the six ethnic republics experience a period of strong economic growth and relative political stability. In having dinner with a family in Bosnia/Herzegovina, a grandmother says she misses Tito’s government. She felt life was better with Tito as leader of the six territories.

Novic’s story is of a 10-year-old girl who loses her mother and father when stopped at a Serbian check point in the early 1990s. The Serbian army gathers a group of Croatians, lines them up in a circle around a pit, and shoots them one by one. This is not our guide’s story, but his story reinforces Novic’s picture of Serbia’s and Croatia’s conflict. Our guide explains how the United Nations helped Croatia survive the 1991-1995 war. Interestingly, the guide denigrated America’s role in the war. In his opinion, America stood on the sidelines when Serbs were perpetrating mass killings.

The troubling issue with all international conflicts is where the line is to be drawn between being American “helpful Hannah’s” and exemplars of good and responsible behavior.

What's the rest of the story?

This book had a sudden ending. I think there is more to be told. It would be nice to have author notes at the end, at least.