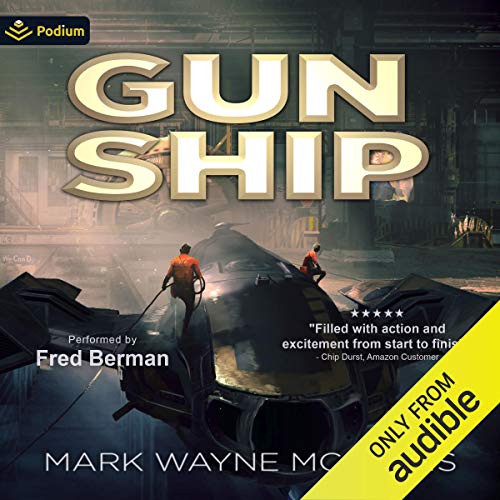 During the day, he’s a South Chicago high school janitor, slopping a mop around from nine o’clock to three o’clock, five days a week. At night, hiding out in an old boarded-up factory, he attends to his damaged interstellar spacecraft, making repairs and counting the days until he can return to his homeworld of Calunoth. All he needs to do is mind his own business and avoid any messy human dramas for just a few more weeks.

But it is on one of those quiet nights when he hears them outside: the MP140s. Named for a police radio code for murder, these bangers are among the worst, most ruthless killers in the entire city. Peering down from the third floor window, Babar recognizes the quiet hermit boy below him, the one with the ugly facial scars, walking into a death trap. Little does Babar realize at the time that this scared, complicated, seventeen-year-old will be the key to saving the distant Realm of Dom Dynasty.

The story was interesting and the narrator kept it interesting by using different inflections for each character.

I thought the book was great. Good characters, pace was excellent, and good plot that sets the tone for a good series. I listen to A LOT of books and have to say that Fred Berman might be the BEST narrator on Audible right now. I know that's saying a lot (sorry Mr. Bray), but he truly is a remarkable storyteller!

Seriously how did this get published

I had know idea where the author was going, nothing made any sense. Fred did a decent job narrating

I truly enjoyed this book. I had my doubts but I was won over. Cannot wait for book 2. Please hurry!

Good plot, lousy execution. Definitely written for teenagers. I was surprised to find how old the author is.

I started this book with high expectations but it started very slow and seemed to go no where...

The narrator was able to bring each character to life as a distinct individual, although I couldn't help but picture Justin as being played by Fry of Futurama.
The story twisted and turned as the characters were placed in one seemingly hopless fix after another. The listener could easily be invested in each characters fate, and wonder how they could possibly win the day.
But you'll have to listen to see if their plan comes to fruition.
Highly recommend.

This is a good book, however no follow up book. look like the story is not complete unless I'm missing something.

Sort of a coming of age story line for two humans and two aliens. Drags a little at the beginning, but starts to get interesting by the end of the first chapter. The sudden shifts to explain the young prince's history. why he acts and did the things he did. Seem too abrupt.
Fred Berman did a great job on the narration. Thus making it a really good listen. Distinctive voices and dialects. Fred is definitely the man for book two.

I hope this continues, loved the story, I don't know how u come u with this stuff please continue