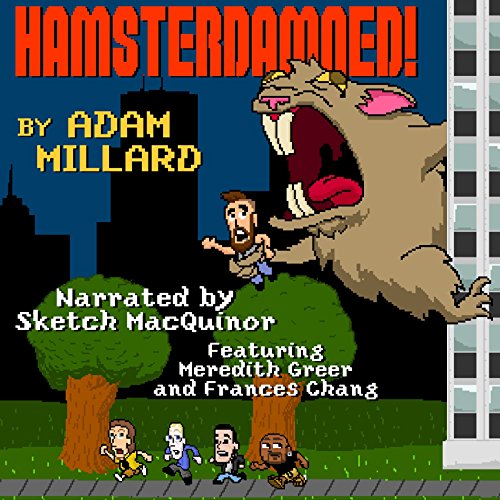 Amsterdam: the sex and drugs capital of the world, where weed is legal and smoked alongside coffee in one of the city's many koffiehuises. It's Mike's stag-do - one final weekend of debauchery before marrying - and along with four of his friends, he intends to paint the town red. Unfortunately, they're not the only ones eager to paint the town red; six evil hamsters escape the delivery-truck and stumble upon a contaminated batch of space-cake. With the euphoria they experience comes a side-effect none of them could have anticipated: The hamsters start to grow.

Hamsterdamned! is the action-packed and comical tale of gigantic rodents and sex-midgets, of one-legged prostitutes and inept Dutch policemen, of camaraderie and one man's fight to stay alive so he can marry the woman of his dreams.

If you could sum up Hamsterdamned! in three words, what would they be?

This book's characters were airheaded, for sure, but it was in the way that allowed the audience to care for, as well as feel sorry for, the buffoons (Sort of like Hunter S. Thompson meets Judd Apatow.).

The lascivious humor and gore were vulgar, but the text never managed to dip into the "Too Much" area, a place where many similar stories go.

Finally, this book provided the listener with the ability to accept the impossible situations. Usually this type of narrative is done so outrageously that the suspension of disbelief becomes a chore and something the reader or listener is no longer willing to do. This book, however, found the right balance between over-the-top and under-the-exaggeration-line.

What was one of the most memorable moments of Hamsterdamned!?

The one line that cracked me up was the narrator's description of Stuart's pick-up line.

This line contained nearly flawless delivery as well as an condemnation of the monstrosity that is pun-based philandering.

What does Sketch MacQuinor bring to the story that you wouldn’t experience if you just read the book?

As enjoyable as every character voice was, what stood out the most in terms of the voice acting was McQuinor's soothing tones that enchanted the listener like a irreverent, male, British siren song.

What struck this listener in particular was how he was able to provide a subtle commentary on the story. You could hear the narrator trying to be as objective as possible, but there were times when his timbre suggested that he found the characters jus as ridiculous as we did. This provided a layer of subtext to the storytelling and let the listeners know that we weren't alone in realizing what a farce we were witnessing.

I won't ruin the ending for anyone, but I will say that I wasn't expecting it to be as heartfelt as it was.

I am dying to see Simon Pegg and Edgar Wright make this into a film.

If you could sum up Hamsterdamned! in three words, what would they be?

Mike was my favorite character because he was forced into the role of hero. He had no choice but to try to survive and beat the hamsters who had ruined lives, Amsterdam, and the bachelor party that he didn't want to have. He never gave up.

Have you listened to any of Sketch MacQuinor’s other performances before? How does this one compare?

Yes, I have listened to other performances by Sketch MacQuinor, and this is the first time I have heard him speak with a Dutch accent ( which I have been told was very good by people who know better than me). His narration of all of the male characters and the hamsters as well as having actual females as the female characters brought this hilariously horrific tale of fantasy to life in two brief hours. I have enjoyed Mr. MacQuinor's other performances, but his talent truly shines in pieces like Hamsterdamned when he had an excellent book from which to work, and could stretch his imaginative muscles.

I was surprised how quickly I became attached to the human characters, and how badly I wanted the hamsters to die! I was sure my laughter bothered others, but I couldn't help it.

I hope that Adam Millard and Sketch MacQuinor can collaborate on many more projects. They make an excellent team.

Would you listen to Hamsterdamned! again? Why?

Yes, it was so damned ridiculous, that it was funny and entertaining! The array of voices and accents kept you vested in the story. Yes, the story of those damned mutant hamsters!

Would you recommend Hamsterdamned! to your friends? Why or why not?

Of course! My friends like fun, I only like fun people. They will listen to this and nary utter a complaint, because they KNOW what entertainment is!

My favorite scene was the hamsters getting stoned and trying to figure out where to get more pot.

Hamsterdamned - They're cute until they eat your face off!

This was so fun, I was going to take a nap, but didn't get any sleep, because I was listening and paying attention to the story! Naps are very important to me, so it was a huge sacrifice!

I struggled to finish the book, restarted several times. Badly written, illogical setting / storyline and also weird pronounciation. Why choose Amsterdam for your book, and then choose a narrator that can't pronounce Dutch names? Could easily have been set in an English speaking city. Hope I can return the book.