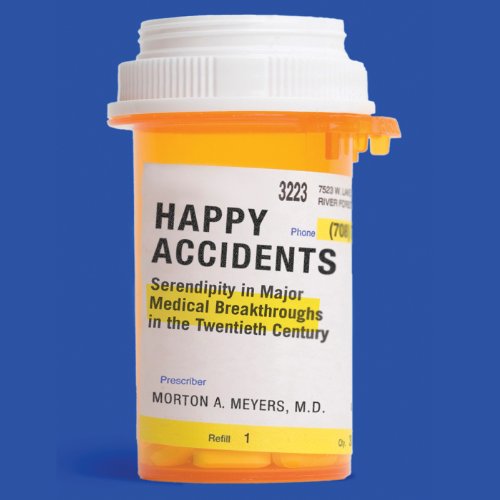 A fascinating and highly accessible look at the surprising role serendipity has played in some of the most important medical discoveries in the 20th century.

Happy Accidents is a fascinating, entertaining, and highly accessible look at the surprising role serendipity has played in some of the most important medical discoveries in the 20th century. What do penicillin, chemotherapy drugs, X-rays, Valium, the Pap smear, and Viagra have in common? They were each discovered accidentally, stumbled upon in the search for something else. In the 1990s, Pfizer had high hopes for a new drug that would boost blood flow to the heart. As they conducted trials on angina sufferers, researchers noted a startling effect: While the drug did not affect blood flow to the heart, it did affect blood flow elsewhere! Now over six million American men have taken Viagra in their lifetime.

Winston Churchill once said, "Men occasionally stumble across the truth, but most of them pick themselves up and hurry off as if nothing has happened." Within the scientific community, a certain stigma is attached to chance discovery because it is wrongly seen as pure luck. Happy accidents certainly happen every day, but it takes intelligence, insight, and creativity to recognize a "Eureka, I found what I wasn't looking for!" moment and know what to do next. In discussing medical breakthroughs, Dr. Morton Meyers makes a cogent, highly engaging argument for a more creative, rather than purely linear, approach to science. And it may just save our lives!

Good information in the book, just not well written. It was hard to follow and I got bored.

All premed students should read or listen to this before embarking on their careers. Dr. Meyers places a number of significant innovations/discoveries into proper and memorable context.

Amazing stories of serendipity and breakthroughs

A collection of well researched stories regarding serendipity that lead to significant medical breakthroughs. The stories are fascinating. The narrator does a solid job. Literally not a bad chapter in the entire book.

This was a very enjoyable book on why we had some of the medical advances that are so important to us. It may have been by accident but it took someone to see and understand it. A great read for any medical professional or anyone who enjoys science or serendipity

The material was interesting, but this was the worst narration of any book I've listened to. The narrator sounded like a person who just learned how to read English. The narration made the material incredibly boring at times.