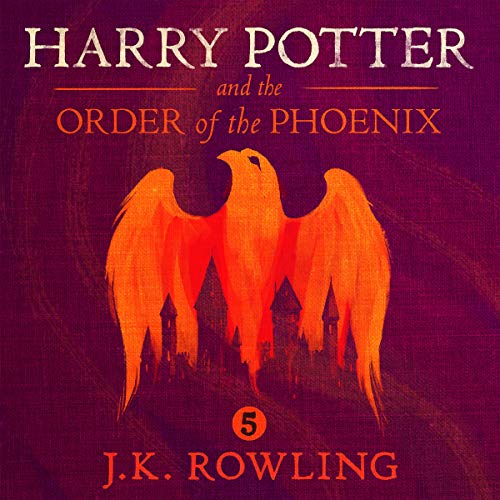 Harry Potter and the Order of the Phoenix, Book 5

Harry Potter and the Order of the Phoenix, Book 5

"'You are sharing the Dark Lord's thoughts and emotions. The Headmaster thinks it inadvisable for this to continue. He wishes me to teach you how to close your mind to the Dark Lord.'"

Dark times have come to Hogwarts. After the Dementors' attack on his cousin Dudley, Harry Potter knows that Voldemort will stop at nothing to find him. There are many who deny the Dark Lord's return, but Harry is not alone: a secret order gathers at Grimmauld Place to fight against the dark forces. Harry must allow Professor Snape to teach him how to protect himself from Voldemort's savage assaults on his mind. But they are growing stronger by the day and Harry is running out of time....

"To call Dale a 'reader' of books is like saying Monet was a Sunday painter." (Los Angeles Times)

This makes me so happy!

I forgot how completely livid Umbridge makes me! Like literally fuming with rage. WARNING: Jim Dale does SUCH an amazing job of reading and telling a story and gets you so invested in it you may chuck your mobile device across the room in Umbridge-induced-anger.

Jim Dale deserves an oscar an Emmy and a Grammy

The author wrote an extraordinary series and Jim Dale does it justice by bringing the characters to life!

My family and I really enjoyed listening to this great book. We’re looking forward to The Half Blood Prince next.

I feel this book had great narration and story. Highly recommend to everyone of all ages.

Where the entire story really come together

I enjoyed the whole series, the narrator is excellent and the saga of Harry Potters life really starts to culminate towards the final confrontation that will shake the wizarding world.

The book was absolutely fantastic and Jim Dale. Narrating brought it to life. I highly recommend this series.

Jim dale does a fantastic job bringing this book to life! Ive enjoying every Harry Potter book so far and i look forward to listening to the next one

Jim Dale is a phenomenal narrator. He really brings the store to life, and creates a very engaging store.

I love the way this book is being read, I've never read Harry Potter before and I am so happy that I started listening to the audio version.

Harry Potter is a wounderful book J.K. Rowling as stunned us again thank you for the wonderful book

Jim Dale is the BEST!

Of course I love the books and all things HP. Otherwise, why would I buy the audiobook!? Jim Dale is one of the best narrators that I've ever heard. He truly brings all the HP books to life with his voices for each character.

I am embarrassed to say that I have listened to the HP books more than once because it's such a joy hearing them read by Mr. Dale.

Each one is better than the last!

Jim Dale is spectacular, I feel like I hear each character when he is reading. I think he is the only one ever meant to read multi-character stories! J. K. Rowling keeps me wanting more! While the battle between good and evil grows stronger, as long as Harry's fighting for the good, I feel safe!

Epic saga continues to impress as to the imagination of the author. A fantasy so real it's believable. Jim Dale is the most amazing and talented narrator I've ever heard. He has a gift for giving each character a voice and personality.

If you could sum up Harry Potter and the Order of the Phoenix, Book 5 in three words, what would they be?

This volume forms the crux of the overall Harry Potter saga, as the tension builds inexorably from the beginning of the novel (when only Harry, alone of the magical community, has firsthand knowledge not only that the Dark Lord has risen but that he has begun attacks within the muggle community) and the end (when....NO SPOILERS, but let's just say the cat is out of the bag on the Voldemort question). In between, Harry must endure not only the scorn and ridicule of those whom he once counted as friends, not only ceaseless mockery in the corrupt press, not only official legal action against him brought by corrupt and ignorant ministry officials...but also actual physical torture at the hands of at least one secret Death Eater/sympathizer who has managed to infiltrate the Hogwarts faculty.

What was one of the most memorable moments of Harry Potter and the Order of the Phoenix, Book 5?

Among the most crucial scene in this, the pivotal Harry Potter volume, are the attack on Dudley, the revelation of a secret witch who has been masquerading as a Privet Drive Muggle for Harry's entire lifetime, Harry's trial at the Ministry (with the unforgettable surprise appearance of Dumbledore, to the astonishment of the entire courtroom), Snape's worst memory explored, Rita Skeeter finally getting (thanks to Hermione) the comeuppance she so richly deserves, the intense drama on the stairway when the evil Dolores Umbridge attempts to expel the foolish visionary Professor Trelawney, the unforgettable scene in which the Weasley twins announce a change in their educational plan (during one of the final and most intensely satisfying laugh-out-loud chapters you will ever read, "Career Advice), and the final dramatic confrontation between good and evil within the Ministry, bringing with it, as it does, a complete reversal of feeling about Harry within the magical community at large.

This is a rollicking good read that stands alone as a superb novel for any age reader.

As usual, Jim Dale creates additional magic within an already magical story by bringing each character to life, with never a wrong note, a too-lengthy pause, or a mispronunciation. But in this volume his performances of the female characters are standouts--especially Umbridge, McGonagall, Mrs. Figg, Hermione, Trelawney, and the "journalist," Rita Skeeter.

Out Of the Shadows

[PLEASE PRESS 'YES' IF YOU FOUND THIS REVIEW EVEN THE LEAST BIT HELPFUL! THANK YOU!!!!]

I've been rereading the series thru Audible, and I always seem to say to every book I've finished as the best one.

However, I think this is really my favorite for now since things have become gloomier and Harry becoming more mature at the end of the book. The entire book had me at the edge of my seat constantly and was always surprised on how JK Rowling could create such an extensive and creative world.

As for Jim Dale's narration, I only have positive things to say. He made me appreciate the book more.

I bought Audible because of the Harry Pottet series. The voices he has for each of the characters and the emphasis he has on words make it sound like real conversations.

Action at its best

The books just get better and better. The narration is awesome. I find myself cheering out loud when something good happens for Harry. LOVE these books

amazing book for mystery and fantasy lovers.I love it so much. it is really interesting.

A step down from previous books

We all know the book is spectacular. No qualms there. But the audiobook made some strange choices with the recording and narration that really took me out of the story.

1. For the previous 4 books, Dale has pronounced “Voldemort” with a silent “T” in a very French manner. No issues there. Rowling herein has said that’s how it’s pronounced. But suddenly in this book Dale pronounces the T at the end VERY prominently. It wouldn’t be a big deal if it wasn’t SO inconsistent from the other readings he’d done. If you’re listening to all the books in order, it’s very jarring to hear everyone suddenly pronouncing the character’s name differently.

2. The voice he gave to Luna is so bizarre. It’s described as light and airy, but the voice he gives her sounds like that gruff uncle whose had too much to drink at the New Year’s Eve party. It’s very distracting.

3. I don’t know if this particular audiobook was rushed or something, but the editing is very odd in places. Randomly throughout the story, there will be an extremely long unnecessary pause in between paragraphs that leads you to believe the app crashed or something.

I’ve been very impressed with Jim Dale’s performance and the audiobooks as a whole for the HP series up to this point, but I unfortunately have to say this one took a BIG step backwards for me. I hope the next one is as good as the previous ones.

The Most Imperfect Harry Potter Book

This is a great Harry Potter book. I was always of the belief that the middle books (3, 4, 5) were the best because they explore more mature themes and have a darker tone. However, as compelling as the story for Order of the Phoenix is — it is horribly bloated. There is too much padding that deviates from the main plot line of the book. This book would benefit greatly from trimming the fat. The book would be more streamlined, and the reader would be able to remain engaged in the main story rather than suffer through long periods of nothing happening. Unfortunately J.K. Rowling simply can’t resist her maximalist tendencies.