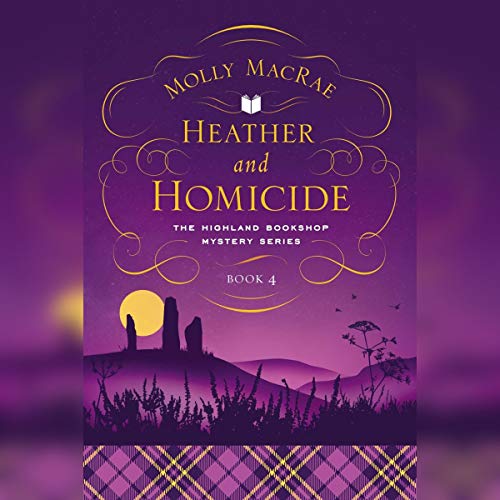 True-crime writer Heather Kilbride arrives in the seacoast town of Inversgail, Scotland, to research a recent murder for her new book. But if that’s true, why does she seem more interested in William Clark, a shadowy lawyer with no connection to the murder? Her nosy questions arouse the suspicions of Constable Hobbs, the members of a local writers’ group, and Janet Marsh and her crew of amateur sleuths at Yon Bonnie Books.

Heather’s unconventional research methods prove deadly when Janet discovers her lifeless body - except the “body” turns out to be a dummy dressed-up to look like Heather. Meanwhile, Heather is sitting at a safe distance observing Janet’s reactions.

Then Heather is found dead - again - sprawled at the base of an ancient standing stone, and this time it’s for real. Clutched in her hand is a valuable miniature book last seen at Yon Bonnie Books, and now the police want to know how Heather, the miniature book, and Janet are all connected. But Janet and her group of sleuths have two questions of their own: Who else is interested in knowing that connection - and is that person a cold-blooded killer?

I was very disappointed with Heather and Homicide. The story rambled on and on without a mystery until chapter 20. The ending didn't make since and the book became background noise as I completed paperwork. Lucy Paterson does a great job with the accents. But she couldn't save this book. I returned it.

Molly MacRae has another smashing story in this continuing series. Old familiar characters make their appearances in between the new characters and the developing story. Trying to figure out how the previous book is entwined with this sends you in many directions until confronted with the new murder. How does this all fit together? That’s the job of our ladies to unravel it all before putting it altogether and identifying the killer.