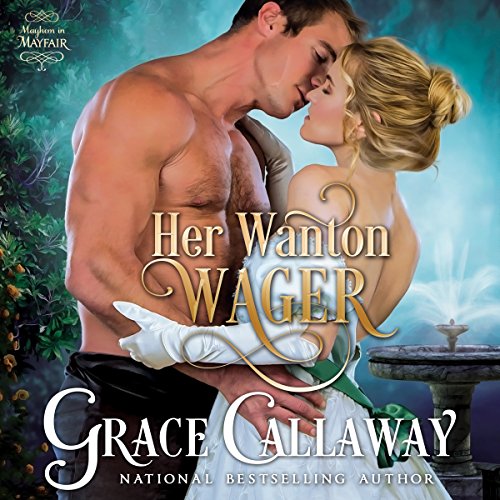 A Wager She Can't Afford to Lose

When her brother falls into the clutches of gamester Gavin Hunt, feisty heiress Persephone Fines will do whatever it takes to save him. Hunt offers her an outrageous proposition: he will release her brother ... if she can resist six nights of seduction. Can she withstand the scoundrel's wicked charm - and the shocking desire he rouses with each touch?

A Bet He's Determined to Win

A product of London's violent stews, Gavin Hunt has clawed his way to success and power. Now he will stop at nothing to achieve his life-long goal: revenge upon the man who betrayed him. He plans to seduce his enemy's sister...but doesn't count on losing his heart. Will he give up his need for vengeance - or risk forsaking the only woman he's ever loved?

From Six Nights ... to Forever

As the battle of the sexes rages on and seduction flares into uncontrollable passion, Gavin and Percy must also fight a hidden enemy. Only by trusting one another can they defeat the threats of past and present. In this high-stakes game of love versus sin, what will be the outcome of...Her Wanton Wager?

This was so much better than the first book in the series. Granted, the sex scenes are more graphic and crude than most other regencies I've read but the story was much better. I had many issues with narration, however. Pronunciation. For instance, The "O" in "Covent" (Garden) was pronounced like Covert; "Ton" being pronounced like "tun". I can't remember the other words right now (meant to write them down) but I found it very distracting.

I'm glad I read this second book. The characters were likable and the story was good. I'm glad there are more in this series.

I listened to 15 minutes and couldn’t go any further. The narration is horrible! You can hear sharp inhale of breath after each sentence. Can’t say how well the story is which is sad since I love this author. To be fair I gave the story 3 stars.

I loved this series so much I was able to endure the irritating narrator.
I found that if I listened at x1.25 speed it was much better.

It's been a while since I wrote a review but Percy stole my heart from moment #1 and so did Gavin! Loved every moment of their adventure!

I don't know why anyone complains about the narrator. I think Erin Mallon does an amazing job and brings the characters to life. I particularly love the whole Hades and Persephone reference in this story. Very entertaining, romantic and sexy. I'm ready for the next one in the series.

What did you love best about Her Wanton Wager?

The relationship building and banter between the lead characters Gavin Hunt and Percy Fines.

What was one of the most memorable moments of Her Wanton Wager?

Percy sneaking through the hidden corridor of the gaming hell the Underworld and what she saw!

The confrontation between Gavin and Nicholas at long last. The truth of what happen one faithfuls night when they were young boys in the stews!

It made laugh and cry. When Hugh Steward died so sad!!

My new favorite author and series!

You know when you pick up a book with zero expectations and get blown away when you read it? This is one of those books for me. I had not read anything from this author and knew nothing of the series and now the series and the author is on my "favorite" list.

The main characters bring on the tension and angst, but they also bring the funny banter, charm, and sweet romance. Percy is adorable- headstrong and loyal, so much so, that she would risk facing the devil himself to try to save her brother from ruin. She is a genuinely good person with inclinations to adventure and mystique which, in her opinion, make for titillating writing inspiration. Gavin is a historical bad boy with enough brains to have propelled himself into building a fortune. He has a sordid past and holds a fierce grudge. So, when he realizes that Percy can be a pawn in his scheme for revenge, and a tempting little minx to boot, he feels like he'll finally have his cake and eat it too.

This book has all the components I enjoy in a romance novel: well developed characters, witty banter, smoking hot love scenes, and a tight over-arching plot to move the story along.

This was the first book I read in the series and I did not find myself lost or wondering. I have since devoured the rest of the books in the series that are available in audio form and I can say that they can be stand alone books.

Narration:
Narrator Erin Mallon
Performance 5/5
Speed 1.25X
Excellent narration. Great tone, pace, and distinction. I enjoyed listening to this through headphones and through the speakers in my car.

I highly, highly recommend this book. Very witty and has some funny parts as well. I liked the love development between the two main characters and the passion was hot enough to make you sizzle. Now I cannot get into the book I just started by a different author ☺. Can’t say enough good things about this book.

Gavin and Percy come from two different worlds, but they fit perfectly together. I really enjoyed watching their story unfold and getting the opportunity to find out more about Nicholas Morgan as well. I love how Grace Calloway entwines these stories together with unforgettable characters that you really wish were your neighbors. The narration is excellent as well. If you’re on the fence about this one, and you like steamy romance, go for it. You won’t be sorry.

This is the first audio book by this author I’ve listened to. I enjoyed being surprised and touched by the ending. The narrator was good and I am now looking forward to listening more by the author. Highly recommend it!