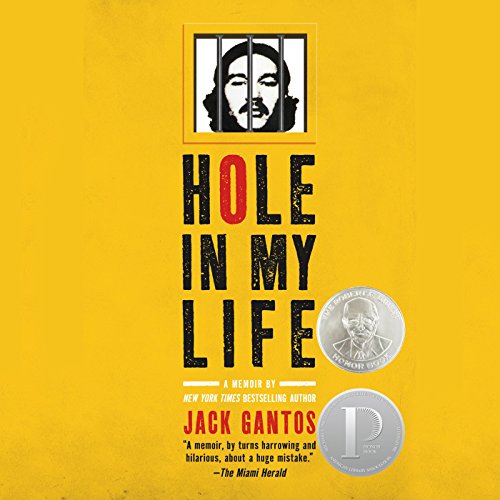 In the summer of 1971, Jack Gantos was an aspiring writer looking for adventure, cash for college tuition, and a way out of a dead-end job. For ten thousand dollars, he recklessly agreed to help sail a sixty-foot yacht loaded with a ton of hashish from the Virgin Islands to New York City, where he and his partners sold the drug until federal agents caught up with them. For his part in the conspiracy, Gantos was sentenced to serve up to six years in prison.

In Hole in My Life, this prizewinning author of over thirty books for young people confronts the period of struggle and confinement that marked the end of his own youth. On the surface, the narrative tumbles from one crazed moment to the next as Gantos pieces together the story of his restless final year of high school, his short-lived career as a criminal, and his time in prison. But running just beneath the action is the story of how Gantos, once he was locked up in a small, yellow-walled cell, moved from wanting to be a writer to writing, and how dedicating himself more fully to the thing he most wanted to do helped him endure and ultimately overcome the worst experience of his life.

"It will leave readers emotionally exhausted and a little wiser." (Publishers Weekly)
"Gantos' spare narrative style and straightforward revelation of the truth...will capture not only a reader's attention but also empathy and imagination. This is great for every aspiring writer and also a wonderful biography for teens struggling to discover their deepest, truest selves." (Booklist)

A great memoir from a great kids/YA author

I first read Hole in My Life when it came out. I was 12. I had read the Joey Pigza books in elementary school and the Jack Henry books in sixth grade and thoroughly enjoyed them. I was hungry for more. Naturally, when I discovered this book I begged my parents to buy it for me sight unseen. I was disappointed that it wasn't another Jack Henry book but I couldn't put it down. It was powerful and dangerous. I felt like I was peeking into the real world. I could scarcely believe what the man behind my favorite books had done. Had been through. It stuck with me and still does to this day. I've revisited this book often. Probably more than any other that I've read. If you were a fan of Jack Gantos as a child (or indeed at any point in your life), pick this one up. If you've never heard of the man, this is a solid memoir and worth your time.

I was first introduced to the writing of Gantos when teaching a 6th Grade reading group book club with Dead End in Norvelt. I loved his writing and the book became a favorite to me and my students. I looked Gantos up and learned about his range of writings and was excited to read the adult literature. Gantos has a style that make a me 1. want to be a wider reader based on how he references specific authors and titles in his books that I've never read or knew, and 2. Want to read "Everything Gantos"
Keep writing Mr. Gantos! I love it!

My son, Jack, and I listened to all the Joey Pigza books. I recommend all of them, Jack Gantos is awesome. They’re comical, embarrassing, articulate in a rarely represented truthful childhood way. I loved them all and would’ve read them without Jack.

I wasn't sure at first that I'd like this book but as time went on, I latched onto his style and it pulled me right in. i even got motivated to Google more about the author on the Internet. Now I'm looking forward to buying the Norvelt books!

Rage and agony fill me at an unfathomable level

First of all, the book was very monotone and boring, not funny and very anticlimactic. You'd assume a book about a kid smuggling drugs and going to prison would be very interesting, but no. It's about a white man getting caught in one of the biggest hash smuggles at the time and thinking he's innocent because he's just a kid. He has it INCREDIBLY easy in prison compared to most people. He works in the hospital unit, doesn't have a bunk mate, and is held in a FEDERAL prison which is a billion times better than a State prison. He gets out early simply because he found a loophole. What really grinds my gears is that Jack did next to nothing with this experience to help others trapped in the prison system. He has first hand experience with the racism, rape, poor conditions, and power imbalances within the prison system and he chooses to use his platform to talk only about he realizing he was a dumb kid. 0/10 DooDoo Feces book. 👎

Just as great listening this time around, as reading it a few years ago.

Don't be fooled by his mild mannered tone!

Yes! Real life stories are so interesting, and knowing that all of these events happened to Jack makes them that much more curious. It takes us back to a time before truancy boards, and before we really looked out for teenagers as a nation. And it's interesting to see what a kid can get into if unattended ...

What other book might you compare Hole in My Life to and why?

I have never read anything like it, so it's difficult to make a comparison. It reminds me of crime tv but as if the criminals had the camera and wrote the script.

Which character – as performed by Jack Gantos – was your favorite?

Jack was an interesting character, but I also liked the apartment manager Davey. She had spunk!

I certainly felt angry on behalf of Jack. I was frustrated by the judicial system, and concerned at how easy it was for criminals to implicate other criminals without further investigation or scrutiny as to the authenticity of the information that they were giving.

This was an interesting read partly because many procedures that happened (or didn't happen) in the 70's really surprised me. How lax we were with student attendance versus how severe we were with essentially child criminals was the most surprising. I'm glad he made it through the whole ordeal.

While his tone is very casual, his story is actually quite serious. It's interesting to listen to it read by the man who lived it, and I guess I expected more animation at certain moments. But he's just not that sort of guy!

I loved it because he as told his life in one story. very interesting. Good memories of his prison cell and everything about the details.