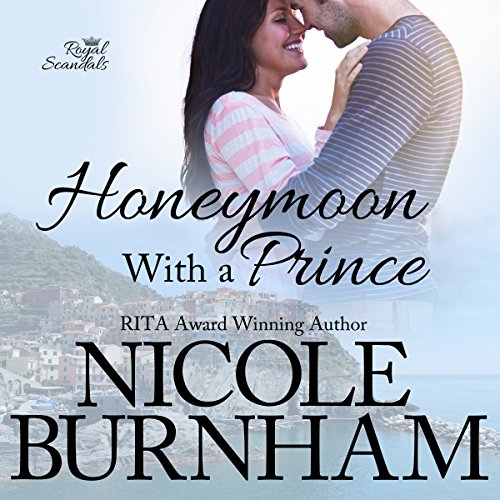 Honeymoon with a Prince

After dumping her rich, lying louse of a fiancé, designer Kelly Chase opts to take her honeymoon solo. What better chance to nurse her wounds in solitude than two weeks of pre-paid beachfront bliss on the breathtaking Mediterranean island of Sarcaccia? Yet when she meets gorgeous local beach bum Massimo, solitude is suddenly less important than enjoying the company of an honest man...a man whose eyes reveal a private anguish.

Fresh from brutal combat, seeking privacy and a chance to heal, Prince Massimo Barrali is intrigued by the gorgeous American who fails to recognize him and treats him as an equal. He offers her dinner, but dinner quickly turns into a night of intense passion...until the police come knocking on the door of Kelly's rented villa.

Kelly's horror at the discovery her fiancé stole her honeymoon fund turns to humiliation when Massimo arrives to post her bail. Once again, she's been deceived by a man who isn't what he appears. But when Prince Massimo offers her a job at the royal palace and a chance to pay her debts, she can't refuse. She hates that she's forced to work with him, hates the desire that still burns between them, but how can she forget the secret torment she saw in him or their sensuous night under the stars?

I cannot find the words to describe how romantic and lovely this book was. Please read it you won't be disappointed. The chemistry between Kelly and the Prince was off the charts.

What did you love best about Honeymoon with a Prince?

What other book might you compare Honeymoon with a Prince to and why?

Judith McNaught is a favorite author of mine. She mainly writes historical fiction, but the vibe of Honeymoon with a Prince reminded me of her novel Once and Always. Whenever I read that book I feel like I'm floating in a dream, transported to a time where anything is possible. Like Kelly and Mass, Victoria and Jason had to deal with betrayal and tragedy in order to have a chance at happiness.

I loved when Kelly came face to face with Massimo for the first time. The playful dog, proved a wonderful judge of character for his somewhat gun shy owner.

I got chills. Beyond the undercurrent of sparks, lay a deep connection between two people trying to mend broken hearts. Add in the beautifully seductive melodic narrative of Hollis McCarthy and the authentic heart stopping emotions of Ms. Burnham's well crafted romance, I felt like I stepped into a fairytale come to life.

A winning combination of author, narrator and sentimental characters. At the end, it's hard to walk away.

I would definitely recommend this audiobook to a friend because of the excellent storyline, writing, and performance.

I enjoy Hollis McCarthy's performance mostly because she has such a soothing voice. She reads the stories just as I would, where I'm drawn completely into the storyline.

Each of the main characters having been through a difficult time calls out to me. Kelly's initial situation broke my heart. To have two men abandon her, leaving her stranded. *sigh* And the effects from Massimo's military days was heartbreaking as well.

I really enjoyed the relationship between Massimo and Kelly. The emotions that Nicole Burnham and Hollis McCarthy draw out of me easily makes this book a 5 Star rating. The HEA ending was perfect. I hope to listen/read more about them in future books!

In a make believe country, with make believe royalty, anyone can meet a prince!
This is a fun listen, with an upbeat story. The reader is terrific and it's easy to tell who is talking at any given time. Take a listen and be transported!

What happens when a women walks in on her fiancee cheating on her with her best friend? She dumps her lying, cheating fiance, goes on the honeymoon, has a one night stand, gets arrested, and then finds out that her one night stand is actually a prince. Honeymoon with a Prince is filled with all types of laugh out loud moments as the story of Kelly Chase and Prince Massimo unfolds. Hollis McCarthy's reading of Nicole Burnham's story truly immerses you into the world as this modern fairy tale unfolds.

Honeymoon with a Prince: Royal Scandals Book 2 by Nicole Burnham. Kelly Chase is spending her honeymoon in Sarcaccia by herself, after she dumped her rich, lying fiancé. After all, Kelly sold her lucrative closet designing business to pay for the trip. She spends her first day on the beach soaking up the sun and the atmosphere, at her private villa. Newly back from a stint in the Sarcaccian army, Prince Massimo Barrali needs time away from the palace, his family and his duties. He has been spending time on his fishing boat with his dog. Of course, his dog loves water and jumps from the boat to swim to shore. The dog befriends Kelly on the beach and decides to share her lounge chair. While Prince Massimo is searching the beach for his dog, he comes upon his sharing Kelly’s chair. The pair start talking and Prince Massimo realizes that Kelly has no idea who he is. He asks her to share dinner with him and one thing leads to another – with them spending the night together. Kelly finds herself in a difficult situation the next day, when the police knock on the villa door insisting that she has misrepresenting who she is – meanwhile the Prince is trying to hide the fact that he is with her. Things seem to go from bad to worse when Kelly is arrested and the Prince is discovered. The plot is pretty fast paced. The characters are well laid out and interesting.

Hollis McCarthy did a good job with the narration of this book. She kept a good pace and the chapters seemed to flow together well. There were no noticeable miscues or issues with the reading of the book. Ms. McCarthy did a great job with the accents and characters – she seemed to be able to flow from one to the other without issue.

What did you love best about Honeymoon with a Prince?
I have enjoyed learning more about the Baralli family and how they deal with life. This is the second book in the series. There are hints of future things to find out about.

What did you like best about this story?
Meeting Gaspare (the protection dog) and his love for water. Also, seeing a strong female character who can stand up for herself and do what she wants

Have you listened to any of Hollis McCarthy’s other performances before? How does this one compare?
I have listened to others of this series. She is consistent in her accents with the various characters.

Did you have an extreme reaction to this book? Did it make you laugh or cry?
It did make we laugh about the dog's exploits.

Any additional comments?
The story is about finding love in unexpected places and standing up for yourself.