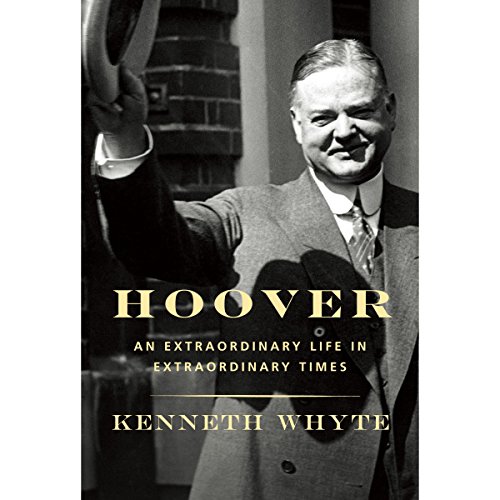 The definitive biography of Herbert Hoover, one of the most remarkable Americans of the 20th century - a revisionist account that will forever change the way Americans understand the man, his presidency, and his battle against the Great Depression.

A poor orphan who built a fortune, a great humanitarian, a president elected in a landslide and then routed in the next election, arguably the father of both New Deal liberalism and modern conservatism - Herbert Hoover is also one of our least understood presidents, conventionally seen only as a heartless failure for his handling of the Great Depression.

Kenneth Whyte fully captures this rich, dramatic life: from Hoover's difficult childhood to his meteoric business career, his work saving hundreds of thousands of lives during World War I and after the 1927 Mississippi floods, his presidency, his painful defeat by Roosevelt, and his return to grace as Truman's emissary to help European refugees after World War II. Whyte brings to life Hoover's complexity and contradictions - his modesty and ambition, ruthlessness and extreme generosity - as well as his political legacy. Here is the epic, poignant story of the poor boy who became the most accomplished figure of his time, who worked ceaselessly to fight the Depression yet became the public face of America's greatest economic crisis. Here, for the first time, is the definitive biography that captures the full scale of this extraordinary life.

"An exemplary biography - exhaustively researched, fair-minded and easy to read. It can nestle on the same shelf as David McCullough's Truman, a high compliment indeed." (Edward Kosner, The Wall Street Journal)

"Outstanding.... This well organized, thoroughly researched, and smoothly written biography persuasively demonstrates that its subject's place in history should be elevated far beyond its current status." (Talmage Boston, Washington Independent Review of Books)

"While no apologist for the man who became synonymous with the Great Depression, Whyte details how Hoover was up against worldwide economic forces that he had no way of controlling and points out that the hard times continued long into Roosevelt’s presidency. Just as interesting, however, are Whyte’s accounts of Hoover’s early life, from his rise from orphanhood to world-traveling problem solver, and his post-presidency attempt to restore his image and regain his place among the 20th century’s most admired people." (Steve Donoghue, The Christian Science Monitor)

As a Canadian I knew next to nothing of Hoover so I will leave it to others to criticize or agree with the facts. Hoover”s life was an amazing story. His work to help the people of Belgium, of which I had never heard though I was born there is alone enough to make him a worthy historical figure. He had great confidence (too much?) in the tenacity and ethic of the people and not in government and how that stands in stark contrast to our time of looking to our government for everything.

What a fascinating story!

I only knew about Herbert Hoover as president and this book, in the almost 28 hours of narration, tells the complete story about how Mr. Hoover grew up in meager circumstances, losing both parents at an early age, and then transformed himself into a business power after gaining a degree in Geology at Stanford University.

The book also takes a fair position on how Mr. Hoover was castigated by the press and the Roosevelt administration and shows the great value he placed in public service, especially when it comes to caring for the &quot;collateral damage&quot; in war time, namely the starving women and children in Europe.

A great book that I will probably listen to again.

I have read a lot of bibliographies of US presidents and this is one of the best. Well written, well researched and incisive. Also, well narrated.

I was curious about Herbert Hoover. I had grown up with my parents' opinion, that Hoover was the cause of the Great Depression. My dad referred to it as "the Hoover Depression", and if we were out of a necessity, he would say my mom was "Hooverizing". Hoover was a great humanitarian, who was responsible for feeding millions of people in Europe after WWI. He also saved millions of children in the Soviet Union, when the crops failed. So many other times he organized food deliveries to starving people. Hoover, like most people, was a complicated person. I personally do not believe he deserved the blame for the Great Depression nor the ill-treatment by FDR. I highly recommend this book. My husband, who is not a history major, enjoyed it, too.

A man of times, He wasn't all bad for he was he was a good person. But the democrats kept trying to destroy all he had done by making him look bad and going after everyone in his cabinets as corrupt.

Includes the beauty and the worts of a great man often skipped past in history.

After listening to this book .... twice ... I had to also purchase a copy. I had no idea about Hoover’s life story and enormous contributions to this country. Like many other, I assume, my ideas about him were tied to the depression and largely negative. Anyone concerned about the current world/ country economic situation and the US role in managing both growth and distribution should read this book.

I learned a lot about Hoover. there are many little known facts about him. this provides a complete picture of the man and shows him to be a real hero.

From a rather uninformed but negative opinion of Hoover this book has completely changed my appreciation for this complex and highly accomplished man.

I learned a great deal about this man who certainly has earned a better place in the history of America than he has received.

This book is a sound tribute to one of the greatest Americans of the 20th century. His life exemplifies what a working President should do. His dedication to improving himself and his country are cornerstones of how wealth can be used in America. So glad the docent at his Presidential Library recommended this book to me. Makes me proud to be an American.