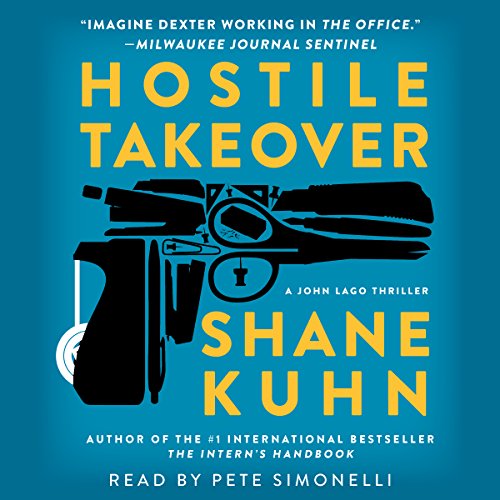 Professional assassin John Lago faces off against his deadliest adversary yet - his wife - in Hostile Takeover, the exciting sequel to Shane Kuhn's best-selling debut The Intern's Handbook, which the New York Post called "a sexy, darkly comic thriller."

At the end of The Intern's Handbook, John tracks down his nemesis, Alice, but instead of putting a bullet in her head, he puts a ring on her finger and marries her. Together they execute a hostile takeover of Human Resources, Inc., the "placement agency" that trains young assassins to infiltrate corporations disguised as interns and knock off high-profile targets. As HR's former top operatives, they are successful until conflicting management styles cause an ugly breakup that locks John out of the bedroom and the boardroom.

But when Alice takes on a new HR target, John is forced to return to the office battlefield in a role he swore he would never play again: the intern. What starts out as a deadly showdown turns into the two of them fighting side by side to save HR, Inc. - and their marriage.

"Those who like Dexter will love John Lago" (Booklist), and in Shane Kuhn's sequel to The Intern's Handbook, listeners will be rooting for this smart, witty antihero to come out on top.

Ultra entertaining from start to finish!

I listen to a lot of audio books but have never felt compelled to write a review until now. This title was so entertaining and well written and narrated, I spent extra time just sitting in my car at the supermarket listening!

The writing is tight and clever, the plot unexpected, and unique. By far the most suspenseful and exciting assassin novel I've listened to. I highly recommend this book for anyone who likes the genre, and likes that Kill Bill style whimsy.

If you can suspend your disbelief, you'll love this book. It's fast-paced, clever, violent and romantic (!) all at once as the story of John Lago, the intern-cum-paid-assassin we first met in The Intern's Handbook, continues along the same vein. However, this time, he's supposed to kill his most dangerous antagonist: his wife Alice.

The author spends a little too much time going into John's previous jobs which don't really resonate with his current one, but it's all a crazy exercise for him and he manages to get through his life with only a few bumps and bruises.

The narrator is phenomenal -- he nails the nuances of John Lago's character and manages to capture the wry humor of Kuhn's writing. His narration is a wonderful asset to this book!

It's most certainly a thrill-ride!

Power in well thought out

I enjoyed the banter between Mr. and Mrs. Hitman. The hotel setting on the weeding day and the explosive nature of what happens is really best seller material.

I'm glad I bought HOSTILE TAKEOVER before finishing up THE INTERN'S HANDBOOK. I would have hated pausing the action-packed John Lago series!

I highly recommend this series!

I couldn't finish this and I liked the Intern book a lot. This is so unbelievable, stupid and full of crap that I couldn't handle it. John is not sexy and the idea that every woman swoons and wants to f**k him is a$$inine. How do I return this garbage?

an absolute roller coaster from start to finish with all the twists and turns that you expect and several that you don't.

Good ...but not better than the first one

Loved the first one

Loved the first one! Couldn't finish this one. Very forced, with none of the first book's subtlety.

Tons of fun and builds on a great storyline

Another fun John Lago story. The John and Alice are back with a few new characters as they navigate the world of assassinations and double cross at HR Inc. I thought the books was just as fun as the first one with a few more twists and turns, and while the plot stays on tasks and has a good amount of action and plot development. I wish there was a bit more reminiscing from John about some of his past jobs which I though was interesting (maybe his greatest “hits” book is coming next). The writing is great and really makes you feel connected with the story and the characters. I hope there is more to come in the series!

Mr Simonelli does a great job with the narration. He really brings the characters to life and adds to the overall enjoyment of this book!

If you're thinking of buying this book, you MUST buy &quot;intern's Handbook&quot; first! Else you won't be in on everything going on. The author gives a general overview, but the first book is definitely entertaining. Having said that, I loved this book! Always great characters, more James Bond action (suspend your belief for a while), and plot with lots of twists. Again, great narration. Loved it!