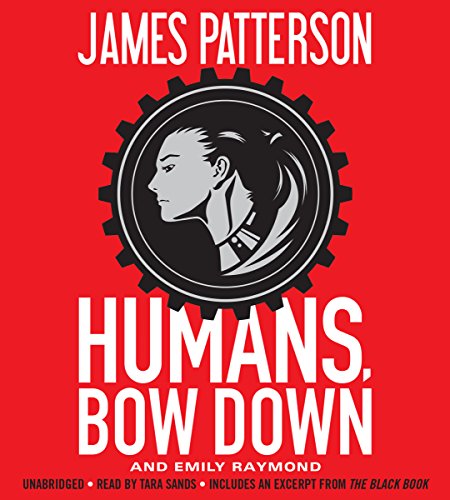 In a world run by machines, humans are an endangered species.

The Great War is over. The Robots have won. The humans who survived have two choices - they can submit and serve the vicious rulers they created or be banished to the Reserve, a desolate, unforgiving landscape where it's a crime to be human. And the robots aren't content: Following the orders of their soulless leader, they're planning to conquer humanity's last refuge.

With nothing left to lose, Six, a feisty, determined young woman whose family was killed with the first shots of the war, is a rebel with a cause. On the run for her life after an attempted massacre, Six is determined to save humanity before the robots finish what the Great War started and wipe humans off the face of the earth once and for all.

Would you consider the audio edition of Humans, Bow Down to be better than the print version?

Haven't read the printed version but I would guess so. The voice added a good amount of tension.

The end was anticlimactic. The story builds up very well but has a lack luster ending. Would have been great if it was longer with a more drawn out story.

What does Tara Sands bring to the story that you wouldn’t experience if you just read the book?

Tara Sands brings a very good voice to the story. She plays the humans very well. The robotic voices could have needed some work, they were so robotic that they were a bit cheesy.

No, I like to listen to stories slowly so enjoy it and give myself mental breaks.

Good overall story but could have done with a more detailed and drawn out ending.

Had a hard time completing the story. Very juvenile and simple. Been a long time since I disliked a book this much.

This illogical nonsense was unlistenable. I would have tolerated more and perhaps finished it if it was written in a lyrical, whimsical style. But the seriousness with which it takes itself is horrendously out of alignment with its premise. Despite Tara's wonderful performance, she could not overcome this terribly written story. I will not purchase another Patterson scifi novel, nor one cowritten with his name on it. I bought this as a direct result of attending Patterson's master class in writing and cannot understate my dissatisfaction.

This book does not reflect well on James Patterson. Silly uninspired story. Do not recommend.

I could tell quickly this purchase was a mistake. Bad narrator and a dated robot story - 'BOTS' they are called. Overshadowed by other more interesting 'robot' storylines (think Battlestar Galactica reboot and Westworld) - this narration makes me think of Will Robinson's robot waving his arms around. I'm deleting this file only after a short listen.

The writing was extremely simplistic, not engaging or compelling. The performance was one of the worst I have heard. not a good match for the characters.

Not at all as expected or desired. It will be returned. I purchased it as a book to listen to with my family on a trip, then the language began so it was purchased for naught.

it went into directions I couldn't guess, not bad. Not knowing the plot is always refreshing.

Once is Too Many

I always suspected Patterson was an awful writer but damn. The prose was so horrendous that only a nation whose President is addicted to Twitter and the populace addicted to the NFL, Dancing with the Stars and Facebook could have this guy as their highest paid author. It started out real strong with a great premise but devolved so rapidly it was worse than sitting through an AA meeting in the basement of a Mormon Temple.