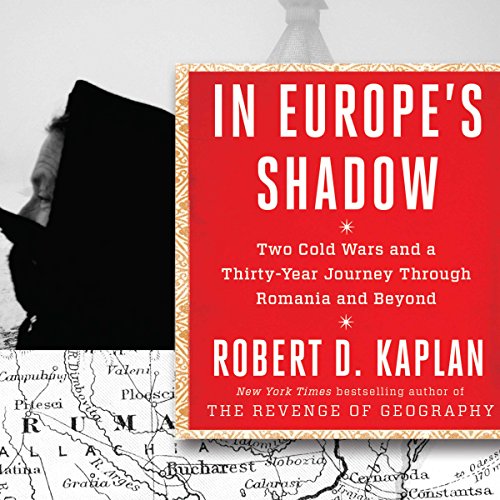 In Bucharest, Romania's capital, Kaplan discovered that few Westerners were reporting on the country - one of the darkest corners of Europe during the Cold War. In an intense and cinematic travelogue, Kaplan explores the history and culture of the only country in the West where the leading intellectuals have been right-wing rather than left-wing; a country that gave rise to the dictator Ion Antonescu, Hitler's chief foreign accomplice during WWII; a country where the Latin West mixes with the Greek East, producing a fascinating fusion of cultures.

In Europe's Shadow is a deep and vivid immersion into one place, a country that is a metaphor for Europe's current challenge in confronting Vladimir Putin's Russia. With the brilliant, insightful Kaplan as our narrator and eyewitness, this book is a shorthand masterpiece about imperialism and a country critical to our understanding of the last century in Europe.

Robert D. Kaplan is the author of 16 books on foreign affairs and travel translated into many languages, including The Revenge of Geography, Monsoon, Balkan Ghosts, and Warrior Politics. He has been a foreign correspondent for The Atlantic for over three decades. In 2011, Foreign Policy magazine named Kaplan among the world's "100 Top Global Thinkers".

Narcist intro and and some revisionism

The audio is of poor quality, you can tell it's been edited with clips inserted in the middle of passages.
The author starts with a self indulgent 2h long chapter about his visits of Romania. Then he sprinkles in some revisionism based mostly on what seems like secondary sources.

The book is all right as a starting point for modern Romanian history but don't let it color your perceptions. Would buy again.

Eastern Europe and its Complexity

Romania has a tragic, beautiful & complicated past. Being wedged next to Russia. It has been a constantl struggle to fight off invaders mixed with different ethnicities & communism. The author gives us great insight into the differences & similarities of Eastern European Heritage now & then.

Robert D. Kaplan has chosen to focus his career on understanding Romania and surrounding countries. Why? Because he pretty much had the area to himself, he says, while others were focusing on the Middle East and other hotspots. Nobody spent time in Bucharest, much less Moldova or the other nearby territories. This could be used as an excuse for a shallow, touristy overview of the region, but Kaplan has ended up writing a book with depth and thoughtfulness.

Kaplan focuses on Romania from the 1930s through World War II, Communism and the fall of the Soviet Union. He philosophizes at length on the meaning of nationalism, ethnic identity and individualism. He writes coolly about the horrors that have been visited upon the country and its people, by both the fascist leadership in World War II and the Communists under Ceaucescu and his predecessor--as well as invaders in prior centuries. He repeatedly returns to the risks facing Romania today, primarily from Vladimir Putin's Russia, which seeks to destabilize its neighbors to prevent them from allying too strongly with the West or becoming a threat to Russian power.

While the book is dense with ideas, it is not always easy listening. I frequently found my attention wandering as Kaplan described the works of yet another scholar or his visit to yet another Romanian town. Listening to the book, you miss the illustrations which might provide some color. (I sometimes went online to look at the maps to see where he was--but that's not easy when you are listening in a car.)

Paul Boehmer, the narrator, did an excellent job with pronunciations (I assume), but his style was somewhat dry, like a college professor giving the same lectures for the tenth time.

So, this book has nothing to do with Eastern Europe and everything to do with how many classical writers and philosophers the author can quote per page. It is boring, heavy and hard to follow because no thought is complete without the author trying to impress with a quote and then to butcher a Romanian name or phrase or persuade you of how smart and sophisticated he is. This is is truly one of the worst books I have come across, and it is mostly because the author's smugness and over evaluation of his self worth.

This was a fantastic interweaving of Romania history and contemporary reality. Highly recommended for anyone inserted in European studies.

The writing is extremely disorganized. Impossible to keep up with Kaplan's ideas as he skips around points in history and overlays them with experience and travel stories in no logical order.

What would have made In Europe's Shadow better?

More empirical events and description. Here, he looks at his hotel room and out the window or, 30 years later, drives through the countryside but apparently not talking with anyone.

Has In Europe's Shadow turned you off from other books in this genre?

I recently read 2 other Kaplan books, Monsoon, and Asia's Cauldron. Both were informative and interesting. They helped set a historical context to help interpret modern-day events. Europe's Shadow does little of that. Instead it sounds like a nostalgic memoir of Kaplan's early days as a reporter -- with memories or musings only of interest to the author.
For any future Kaplan books, I'll read carefully the 1-star and 2-star ratings. Fool me once ... etc.

Yes, he did detract. This book was tedious, slow going, and this narrator didn't help. A more conversational tone of voice, with a bit less drama, would have made it more tolerable. But truthfully, no narrator could overcome the book's basic tedium.

What character would you cut from In Europe's Shadow?

The long, tedious descriptions of earlier historians and philosophers. Those passages could be written just by going to the library, not to Romania. This is a book of reflections (and some reminiscing) not first-hand observations.

Wasted my credit on this one.

Outstanding essay on Romania and the author's experiences of the East

This is a fantastic book, more of an essay than a historical narrative. With the history are peppered stories of the author's previous travels to Romania, and rumination on morality, nationalism, war, and identity. Allusions to other academics, historians, and philosophers are plentiful. I highly recommend.

The narration is terrible. It sounds chopped and stitched back together. By far the sloppiest editing ice encountered on audible. I hope they re-record because it is a story worth telling (sans distraction).

narration and postproduction at its worst

I have listened this book 4 times. The author does a great job, presenting a rather objective image of Romania and its history. The country indeed suffered a lot due to its location. The tragedies of the 20th century with all the horrors that happened, the legionnaires, then the communists are unimaginable today. We need not forget those horrors and we need to protect Europe from falling back to its violent past. I have enjoyed as well the fact that the book is presented as a travel journal, similar in a way to Bram Stoker’s Dracula.

The recording is terrible, I don’t understand what is happening why does is sound so bad. The voice is mechanical and unnatural at times. The non English words are completely wrongly pronounced. There are many names of people and places and books, etc. which are butchered. This affects not only the Romania or Hungarian words but also the French and German ones. I hope that this book is re-recorded. It is a pity because the book is rather good.

A very rich book, not only about Romania and its history, but also about life and
career of a journalist. The book illustrates the importance of making decisions in
your life that appear arbitrarily motivated at first. For example to enter a small
bookstore in King George's, Jerusalem, to buy a second hand
book by an unknown author, and then to follow your destiny after reading that book.
Anyone who reads Kaplan's book understands that books and literature are of topmost importance
for anyone who wants to understand reality,

The narrator Paul Boehmer is doing such a good job, that at moments I was sure that
I listen to the author himself.

Written in a characteristically diffuse and verbose journalistic style but provides many interesting and useful insights.