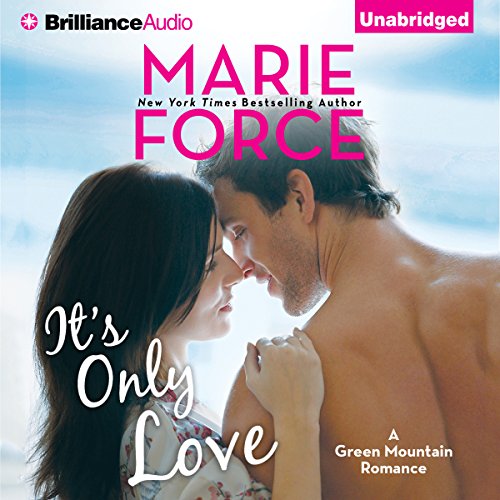 Ella Abbott has long been secretly in love with Gavin Guthrie. A few recent encounters have only added to her infatuation, especially the kiss they shared at her sister's wedding. It doesn't matter to Ella that Gavin is in a bad place. He says there's no hope for a future with him, that he has nothing to offer her. But all Ella cares about is the love she feels.

It's been seven long years since Gavin lost his brother. He'd kept himself under control and moving forward until his brother's beloved dog died and his brother's widow re-married. Since then, he's been drinking, fighting, and even getting arrested. It seems the only time his demons leave him alone is when Ella is around.

Gavin knows it wouldn't be fair to drag Ella into his darkness, but when she inserts herself into his life, what choice does he have but to allow her to soothe his aching heart?

I love this series, it has been a good while since I was back in this world but it's like riding a bike even for my memory. ;) I loved this book the heartache will reek havoc on your emotions but it really was needed. We needed to feel Gavin’s pain. To see and show us just how devastated he is by his brother’s passing. It really gives up inside into why he and Ella took as long as they did to hook up.

I loved how she was gentle and strong she was tough when she needed to be even if it hurt. She really is exactly the kind of person he needs.

This book will put you through your paces but if you stick it out the good stuff does come.

The narration is great, I did find she had some weird mouth noises sometimes but whatever I still liked it.

This Book Was Very Enjoyable

If you could sum up It's Only Love in three words, what would they be?

What other book might you compare It's Only Love to and why?

There are four or five other books in this series and they're all really good. Jill Shalvis, Belle Andre, and Kristen Proby write along this style and are all equally good IMO.

She brought life to the characters and kept the book moving along verses reading in Monotone which I hate.

Yes but if I say what it is, it'd ruin the experience for anyone wanting to read the book.

I haven't been disappointed with any of Marie Force's books.

We're Back in Butler

The fifth book in the Abbott family Green Mountain series, this one features second daughter Ella and her longtime crush Gavin Guthrie. Gavin is the younger brother of Caleb Guthrie, Ella's sister Hannah's deceased husband who was killed in Iraq. Though the death is now seven years past Gavin still hasn't gotten past it and spends far too much time in depression, drinking and occasionally fighting in bars. It would seem that he would be a bad bet for any sort of relationship; particularly the long term type, but Ella seems determined that he's the only man for her. I've read or listened to all of the author's various series' and thus far I've found this one to be far superior to any of her others. All the books in this series are titled after Beatles songs, though I don't think I've ever heard this one. Though these books can be listened to as stand alones, they can best be appreciated if listened to in order; besides the best book in the series is the first on "All You Need Is Love."

I enjoy meeting all the Abbott family. I love he setting and characters. Maybe I'm prudish,but the relationships, while happy, seem just a bit too centered on sex.

This is my favorite by this author so far. It had such a range of emotions.

Fabulous. Another emotional ride for the Abbott family. I am addicted to green mountain stories

the laughter was well acted for the women

seems to be unrealistic but love the big family unity! best part was the moose and a little more description about the surroundings could have helped with imagining the setting.

can't wait for next book in series. going to read all. great story ahead. keep reading

Another great book by Marie Force. Can't get a better narrator than Ms. Traister. Had my attention from the very beginning and never lagged through the end. Can't wait for the next installment.

I have read all of the Green Mountain Series books so far and they are great love stories that keep you wanting more. I have given every book in this series a 5 STAR rating. I can't wait until the next book comes out. Reading Love Stories like this makes you wish there really was a true place like The Green Mountain it sucks you in so much. All of the books I have read so far of Marie Force are Fantastic!!!

I also love the narrator, Christina Traister for the books too. Christina has a great laugh that she incorporates in the story too, I find myself laughing like that at times it's so contagious. The way Christina lowers her voice when Gavin and Ella are making love, you feel like you are right there with them. I can't wait to listen to another book read by Christina. That's what makes a great story even better and awesome!!

The Green Mountain Series are definitely worth the credit and I would highly recommend it if you love great romance stories and really great love scenes between two lovers.