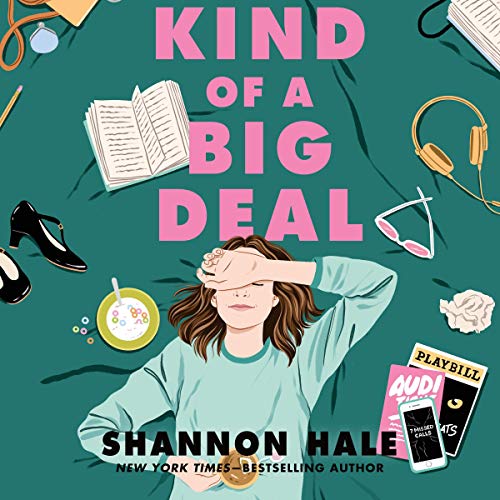 Kind of a Big Deal

From Shannon Hale, best-selling author of Austenland, comes Kind of a Big Deal: a hilarious, madcap story that will suck you in - literally.

There's nothing worse than peaking in high school. Nobody knows that better than Josie Pie.

She was kind of a big deal - she dropped out of high school to be a star! But the bigger you are, the harder you fall. And Josie fell. Hard. Ouch. Broadway dream: dead.

Literally. She reads a book and suddenly she's inside it. And with each book, she’s a different character: a post-apocalyptic heroine, the lead in a YA rom-com, a 17th-century wench in a corset.

It’s alarming. But also...kind of amazing?

It’s the perfect way to live out her fantasies. Book after book, Josie the failed star finds a new way to shine. But the longer she stays in a story, the harder it becomes to escape.

Will Josie find a story so good that she just stays forever?

This IS a great Shannon Hale book!

The people who are pooh-poohing this book have not engaged in much self-examination or reflection. This book SPEAKS to anyone who has projected their own expectations and desires and imagination onto others, seeing things through rose colored glasses, anyone who has had to face hard facts about themselves when at tough (but not rock bottom) places in life. This book is exemplary Shannon Hale work, and like always, it does not disappoint. It was refreshing, captivating, and reminded me to treat people as THEY need, not as I imagine they need.

Really enjoyed this book! It fits in the romantic/coming of age genre, but doesn’t feel like a repeat of the same old thing. It’s original and has a funny, lighthearted feel. But at the same time Josie’s problems feel relatable.

Much of my reading (listening) is “escapist reading.” It helps me deal with the mundane, gives me something to look forward to. Because of that, I felt a real connection with Josie. I felt her anxiety and fears as if they were my own. I loved the growth she made from beginning to end. I love how raw and imperfect the characters were. This may be why some of the reviews aren’t high—it a not a fun breezy read. It deals with real life; disappointment and hurt and fear of failure. But there were some real nuggets of truth and moments of beauty. I just love the appreciation Josie gained for life, it’s ups and it’s downs. Shannon Hale really is a master with this. I will be reading it again.