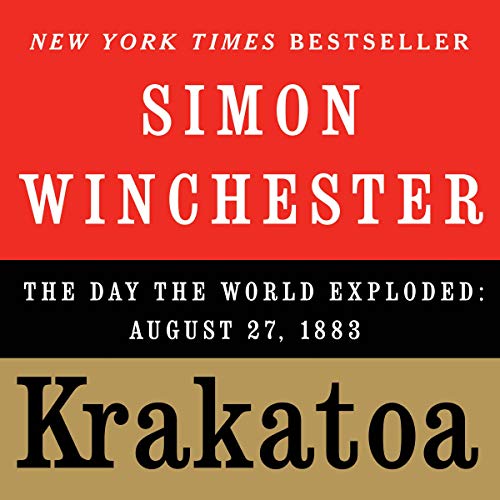 The best-selling author of The Professor and the Madman and The Map That Changed the World examines the enduring and world-changing effects of the catastrophic eruption off the coast of Java of the earth's most dangerous volcano - Krakatoa.

The legendary annihilation in 1883 of the volcano-island of Krakatoa - the name has since become a byword for a cataclysmic disaster - was followed by an immense tsunami that killed nearly 40,000 people. Beyond the purely physical horrors of an event that has only very recently been properly understood, the eruption changed the world in more ways than could possibly be imagined. Dust swirled round die planet for years, causing temperatures to plummet and sunsets to turn vivid with lurid and unsettling displays of light. The effects of the immense waves were felt as far away as France. Barometers in Bogotá and Washington, DC, went haywire. Bodies were washed up in Zanzibar. The sound of the island's destruction was heard in Australia and India and on islands thousands of miles away. Most significant of all - in view of today's new political climate - the eruption helped to trigger in Java a wave of murderous anti-Western militancy among fundamentalist Muslims: one of the first outbreaks of Islamic-inspired killings anywhere.

Simon Winchester's long experience in the world wandering as well as his knowledge of history and geology give us an entirely new perspective on this fascinating and iconic event as he brings it telling back to life.

"Thrilling, comprehensive, literate, meticulously researched and scientifically accurate....It is one of the best books ever written about the history and significance of a natural disaster." (The New York Times Book Review)

"If you're looking for drama, you'll certainly find it here....Winchester manages a dry and ironic delivery, very much in keeping with his writing style. But the main point of interest when the dust has settled is the far-flung ramifications of this eruption upon world events. This is a winner." (AudioFile)

"All readers, science-prone or not, will be delighted by this experience-expanding book." (Booklist)

About a month ago I requested this title from audible and was very excited to find it available now. The author is a geologist and writes in a very pleasant style, easy to follow and very unique. Interesting facts about the catastrophe itself but also about the world, the technology and the people of 1883 are connected and very well projected. I admire the author for his reading skills. Often I find that authors should not read their own books and leave that task to the professional actors, in this case though, I enjoyed it very much. He has an excellent voice, and since he describes a few personal encounters, it is very delightful that he reads those to the listener himself. If people don't like this book, they may expect something else than this first class science report. It is not a love story, nor an imaginary tale. If you read scientific american, enjoy good writing and a new voice to read to you, you will enjoy this book.

Depends on what you're looking for...

If you love books full of details and in-depth history, as well as anecdotal tales and evidence, this book is for you! If you've read the Publisher's Summary and are expecting a book that's, well, "lively", you should probably look elsewhere. Case-in-point: It took nearly five hours to get to the explosion of Krakatoa! I'd seen this book in the book store and was beside myself with excitement when I saw it on Audible.com. Having just finished "Dirk Gently's Holistic Detective Agency" by Douglas Adams, I was looking for something a bit more serious and dramatic. Unfortunately, "Krakatoa" wasn't what I was expecting, explaining everything from the political and economical history of the area to plate tectonics and Darwinism. Obviously, the author is very knowledgable on the subject, and a tremendous amount of research must have gone into this book -- and on the subject of Krakatoa, I personally found the latter half of the book, following the explosion, much more interesting...especially the discussion about Islam. I just depends what you're looking for.

Another WIN for Winchester!

Once again I sing the praises of Simon Winchester. Here is a man who can tell a story! Now wait a minute -- this is NOT fiction. If you are looking for a novel, go elsewhere. This is the true, well-researched account of the most monumental disaster in recorded human history! It's the real thing! You can look in any encyclopedia and read about the eruption of Krakatau/Krakatoa, but Winchester gives you so much more! His research is astonishing and the way he explains it all in so much detail is wonderful!
I like the way he put this horrible event in perspective regarding world events of the time and how the Krakatoa calamity may have caused some of the tension in the world we are living in today.

I am not aware that the man is a geologist, but I know for certain he is a darn good writer. I love his reading style -- so properly British and all that... I am impressed by his ability to amass a lot of facts and work them into a fascinating narrative. History lesson? Why not! Keep them coming, Simon. I will read whatever you write and love every minute of it.

The shot heard 'round the world.

I agree with one reviewer who said that your opinion of this book may depend on what you’re looking for. If you want a rip-snorting disaster epic, this won’t work. If you delight in grand historic events placed in context with history, politics, geography and science, told with a generous dollop of wry humor, you’re in the right place. The research is impressive, made accessible by the comfortably expert delivery. Who would have thought that plate tectonics could be not merely interesting, but entertaining? Winchester’s talent with words, his obvious affection for his subject, and his spot-on reading made this truth better than fiction. My only caveat, and the reason for only 4 stars overall, is that those who listen while driving don’t have the option of looking at maps while listening in order to keep the specific geographic points straight as they are described. But the story deserves full marks for successfully making history and science a riveting “read”. I learned much more than I expected, not just about the eruption, but about the global context of the event and its aftermath, including the cliffhanger that it is likely to happen again.

I am a big history novel buff. Having the historical facts right is important and interesting,. However delivering those fact in a coherent and interesting manner is the basics of what makes a great novel which this is not. The time line is difficult to follow, the details become overwhelming to the point you have to take notes to follow along. If you are looking for historical economic facts in minute detail, if all your pencils must be sharp and all your socks are labeled Monday through Sunday you might enjoy this book. If you are looking for a good historical novel take a pass on this one.

The first 3 or 4 hours were very difficult to wade through. After that the narrative picked up and was quite enjoyable. Loaded with facts and somewhat tedious to listen too.

A superb work, superbly read by the author. This is not an historical novel, so don't come to it looking for exciting fiction. Another reviewer had it right in saying that if you enjoy Scientific American, then you'll enjoy this. A perfect tapestry, woven from the threads of every field of science. Kudos.

One of the best books ever

I've listened to this book several times. Winchester's voice is hynotic. He describes the history of Indonesia, pepper, Dutch colonialsim, tsunamis, early telegraph communication, the London Times, and the discovery of plate techtonics. It is a really wonderful book - well-researched and topical.

Krakatoa is almost amazing, but ends up merely good. All the elements of an excellent book are there: Simon Winchester is funny and engaging; the science is interesting; the period of history is fascinating; and Krakatoa has important implications for today's world. Further, Winchester covers all of this - the science, the history, and the modern implications. So, the problem isn't the facts, or the underlying material, instead it is in the way that he weaves them together.

The book aims for Bill Bryson, using Krakatoa to discuss various fascinating issues, but, unlike Bryson, Winchester can't seem to bring them all together very well. Many interesting points are raised, but never truly connect, making most of the book feel disjointed. For example, the history of Batavia is a major story early in Krakatoa, but Batavia itself is undamaged by the volcano, and there is little follow-up to help us understand why the author spent so much time on the city. Or take the intellectual history of plate tectonics, which is introduced through some plummy personal anecdotes, but then mostly abandoned later in the story. A stronger narrative might have concentrated on a few people or institutions, and how they were effected by Krakatoa, but instead we are taken on a whirlwind tour where little sticks in the memory.

It certainly isn't bad, and I did learn a lot about a fascinating period, but between the somewhat disjointed story and the occasional over-reach (Krakatoa lead to the rise of fundamentalist Islamic terrorism?), I often found my attention wandering while listening.

The Caprice of Nature

The eruption of Krakatoa near Java and Sumatra in 1883 was the first major, natural disaster to occur in the early years of electric telegraphy and its undersea cables. By then all major cities and many smaller ones were connected by telegraph. News events could be sent around the world in an hour or two. The concept of the “global village” began in 1883 as the world quickly learned that all humankind survives at the caprice of Nature.

Simon Winchester’s book, “Krakatoa”, describes colonial history, early telegraphy and workings of geology leading up to the eruption. He then vividly depicts the series of warning eruptions over several months and finally the humongous explosions creating tsunamis killing over 36,000 people. The author describes the aftermath, including worldwide, barometric waves and colorful sunsets. Finally, there’s the robust return of life to initially sterile Anak Krakatoa (Child of Krakatoa).

The author’s descriptions of the Dutch colonization of Indonesia, the role of gutta-percha in underwater cables, Alfred Wegener, plate tectonics and subduction, just to name a few, give the story greater depth. However, these may be tangential wanderings for some listeners. The author is his own reader. His conversational style and dry wit may not be sufficiently dynamic for some. One should listen to the audio sample and read some other reviews before buying the book.