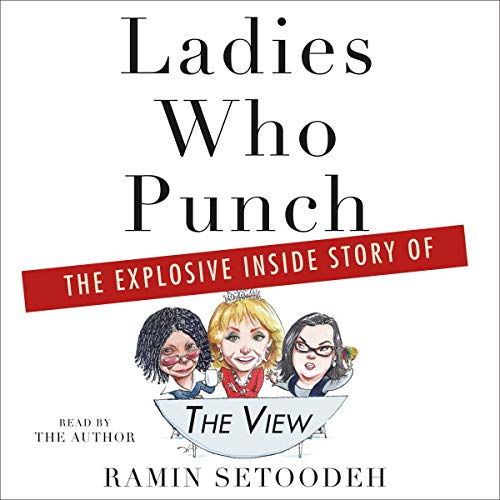 Like Fire & Fury, the gossipy real-life soap opera behind a serious show.

When Barbara Walters launched The View, network executives told her that hosting it would tarnish her reputation. Instead, within 10 years, she’d revolutionized morning TV and made household names of her cohosts: Joy Behar, Star Jones, Meredith Vieira, and Elisabeth Hasselbeck. But the daily chat fest didn’t just comment on the news. It became the news. And the headlines barely scratched the surface.

Based on unprecedented access, including stunning interviews with nearly every host, award-winning journalist Ramin Setoodeh takes you backstage where the stars really spoke their minds. Here's the full story of how Star, then Rosie, then Whoopi tried to take over the show, while Barbara struggled to maintain control of it all, a modern-day Lear with her media-savvy daughters. You'll hear about how so many cohosts had a tough time fitting in, suffered humiliations at the table, then pushed themselves away, feeling betrayed - one nearly quitting during a commercial. Meanwhile, the director was being driven insane, especially by Rosie.

Setoodeh uncovers the truth about Star’s weight loss and wedding madness. Rosie’s feud with Trump. Whoopi’s toxic relationship with Rosie. Barbara’s difficulty stepping away. Plus, all the unseen hugs, snubs, tears - and one dead rodent.

Ladies Who Punch shows why The View can be mimicked and mocked, but it can never be matched.

I’ve been waiting for this to come out for awhile and can say that it does not disappoint!!!

Wow...loved hearing all the info of behind the scenes and didn't realize how cutthroat daytime tv could be but enjoyed all the gossip

It did not disappoint. It has all the juicy gossip you are looking for. I listened to the audio book in 2 to 3 days.

I had the hardest time getting past the narrator, I’ve watched the view since day one and was interested in the storyline. I’m not saying I would not recommend the book. Just buy the hardcover instead.

This book took me back to the years I was a stay at home mom and was regular watcher of the view. Having grown up watching BW Specials, laughing along with Rosie and Whoopi on big and small screen I was always drawn back to the View over the years. I loved hearing the juicy behind the scene scoops that this book offered. It also gave me a look at how networks operated... the good the bad and the ugly! The narration was great.! In fact, for most of the book I thought it was Andy Cohen narrating!!! Thoroughly enjoyed this “ read” and finished in just s couple of days.

This was a very well written book. However, the narration was so bad I nearly quit two chapters in. I’ve never heard male vocal fry before this audiobook. I swear I thought I was listening to a Kardashian. It’s a shame because the story is well told and thoroughly researched.

Not press with this book at all. They released all the good parts so what’s left with this just some story that I really don’t care about anymore.. AND once again the writer feels that they can do a better job of reading their book instead of paying for a professional to do it. Ramin’s voice is so annoying that it’s driving me nuts...I just can’t listen to it anymore! What waste of a valuable credit.

DO NOT BUY the audio version of this book! The narrator is the author and someone should have given him some sound career advice and told him that in no way does he have the voice or skills to narrate this book. His voice is terrible. He sounds like he's got a serious nasal congestion issue, his reading style is very s-l-o-w (almost sleepy) and he has a problem with enunciation and over all pacing. I'd rather listen to a symphony of fingernails on a chalkboard. I actually feel sorry for the author that no one had his back or cared enough for him to tell him he was making a HUGE mistake.

Incredibly interesting! Finished it in one day.

Was unsure because previous comments about performance but on 1.25 speed it sounded very listenable.

The performance is riddled with poor pronunciation and careless errors that amount enough to affect the content negatively.

Example: the narrator quips about Bush 43 mispronouncing the word ”nuclear” as ”nucular” and the narrator at all times pronounces the word nucular as well.

The breaking point for me is when the narrator, speaking about Julie Chen states that she left her show ”The Talk” in Sept. 2008 instead of 2018. THAT’S A 10 YEARS GAP.

Ugh. Someone else should have narrated.

Only on Chapter 3. The author should not have narrated this book. He doesn’t appear to know what a period means, he talks too fast and doesn’t change up his tone. I almost didn’t get this book because of the bad reviews but wanted to hear the story as I don’t have time to read it. Bad move on my part. Will continue on but think twice.

The view is my favorite daytime talk show and this book is very juicy. However the narrator is not good. I wish someone else had read the book. I also kind of wish the author would have included more information on Jed, Candice, Raven and Michelle Years. But other than that the book is very good.

I know this is read by the author, and that's usually a good thing, but I really wish the author had hired an actor to read this. His inflection and delivery is flat. I understand he might not want to "impersonate" these celebrities, but the narration is just really unengaging.

SOMEONE ELSE PLEASE NARRRATE THIS

Great well researched but distractingly bad narration. This book deserves a much much better performance