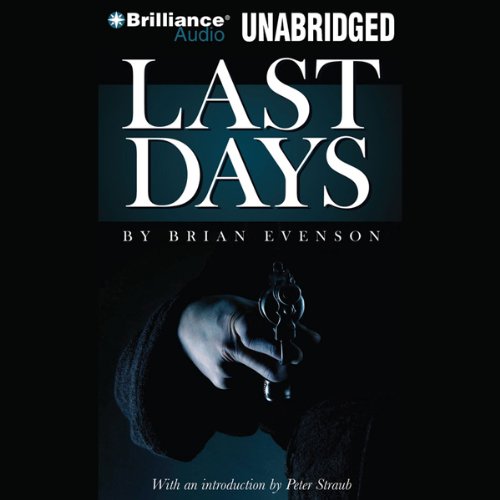 Still reeling from a brutal dismemberment, detective Kline is forcibly recruited to solve a murder inside a religious cult that takes literally the New Testament idea that you should cut off your hand if it offends you. Armed only with his gun, his wits, and a gift for self-preservation, Kline must navigate a gauntlet of lies, threats, and misinformation. All too soon he discovers that the stakes are higher than he thought and that his survival depends on an act of sheer will.

Brian Evenson is the author of eight books of ﬁction, most recently The Open Curtain, which was a ﬁnalist for the Edgar Award and the International Horror Guild Award. He is the recipient of both an O. Henry Award and an NEA award. Evenson’s writing has been described as dark, violent, philosophical, critical, and lyrical.

Red Harvest for the 21st Century

Be careful before you pick this book up. It is as violent and nihilistic as anything I’ve ever read. It opens with a man reflecting on how he recently had his hand chopped off with a cleaver, and then it gets only darker and bloodier. It’s unsettling in what it has to say and in how it says it. It will either give you nightmares from what it says or give you nightmares for what your not reacting to it says about you. If I’d had a clearer understanding of what this was about, I would never have picked it up.

It’s also an extraordinary novel, maybe even a masterpiece, so I’m glad I did.

I gather I’m late to the Brian Evenson party. At least that’s the impression I get from the solid appreciation by Peter Straub that serves as the afterword to the edition I read. Apparently quite a few people already admire what Evenson’s doing. All the better, I suppose; this is so radical and disturbing that I’m comforted to feel I’m not quite alone in my admiration.

As far as I’m concerned, this comes as close as anything I can imagine to capturing the spirit of Dashiell Hammett’s Red Harvest, arguably the first great hardboiled work of literature. (Of course, after reading this, I feel as if my imagination is fairly limited.) In that one, our Continental Op is a man determined to find justice in a world too flawed to provide it. As a consequence, he embarks on a killing spree that renders him “blood simple” (the source of the title of the excellent Coen Brothers’ film). He’ll get justice even if it means murdering everyone in the town on Personville.

Evenson’s Klein is not so much after justice as theological certainty. That puts him on the same footing as many other protagonists – I think most memorably of Flannery O’Connor’s Misfit from “A Good Man is Hard to Find” – but he’s perhaps more driven than any others. He’s taken for a prophet by a group of believers so avid that they mutilate themselves, that they take the number of amputated limbs as the measure of believer’s holiness. Over time (and I can’t quite call this a spoiler) he comes to think he may in fact be a prophet, that he might even be the messiah of this twisted world.

There’s something lurid in his theology, something unsubtle and technicolor, but it serves as the residue of something like real faith. Eventually two groups want to crucify him, one as the messiah and one as the thief by his side. Either way, there’s a yawning chasm at the heart of the novel: what would it mean to know God well enough not to doubt, what would it mean to understand Biblical structure so fully that, when thy right hand offends thee, you go ahead and lop it off with a cleaver. Absent such certainty, but in a world where some profess to feel it, we’re left with the choice of accepting the faith of others’ or believing in nothing. Or, as Klein eventually does, in bringing about a kind of Last Days that harrow what we see of the world.

All of that is fairly subtle in a novel that is decidedly unsubtle. The first signs of it, though, are in the simple excellence of Evenson’s narration. He puts us thigh deep into the story by the end of the first paragraph, and he never compromises his aesthetic vision. He never explains; he presents everything through a red, anaesthetizing mist. We experience one dehumanizing moment after another, but the narrative only gradually pulls away from what we recognize as human experience.

And that aesthetic vision reflects a moral one. In lesser hands, I’d have a hard time admiring a protagonist who laments the fact that he’s no longer human. In the hands of one who, somehow, skillfully [SPOILER] takes us to a point where our protagonist murders more than a dozen people while brandishing the decapitated head of their leader, I’m down with it. Klein really has become less than – or, disturbing thought, more than – human.

That’s a sight that’s full of the horror I have to acknowledge, but it’s also one that supersedes horror and goes where only the most deadened hardboiled or noir can go: to an inquiry into the nature of first principles that seems entirely fresh.

WTF did I just listen to!

This is the strangest, most entertaining gore of a story I've come across in a while. I mean, seriously, amputees as the good guys and bad guys. Are we sure this isn't really Stephen King under a pin name? lol.

Ok, so I purchased this audio because Chris Patton is one of my favorite audio performers. I'm just lucky the story...plot, was just as good as the performance. Now, I have a new fav author in this Brian Evenson.

A fascinating set-up: An ex-police detective, who had his hand by a crazed killer, become the target of obsession of a cult that glorifies self-amputation. After repeated attempts to recruit him are rebuffed, the members essentially kidnap him and keep him hostage a this large estate, under the pretext of solving a murder of a religious leader. Cool idea, huh?

Well . . . we learn little of the protagonist other than he LOVEs to whine. He only makes the feeblest attempt to escape from a bunch of wackos, most of whom can't chase him or shoot him, because they've cut off his appendages. The leader who recruited him constantly lies or refuses to give him information, but threatens him when he can't solve the crime. Sigh. This might work in the hands of a more competent writer. Think Gregory MacDonald and Fletch for a mystery with duplicitous motives. What to add mystery and claustrophobia, read Umberto Eco's The Name of the Rose or John W. Campbell's short story, Who Goes There.

The passivity of the woe is me protagonist is frustrating enough, but the reader does the materials no favors. The soporific voicing of the protagonists makes Ben Carson look like Pee Wee Herman on an espresso bender.

Which is all too bad, since the setup and the deranged cult could have made for a real nail biter, well . . . if you weren't missing those fingers.

Very unique story laden with violence and unclear how to feel about the main character of the story. The writer leaves out a lot of details that you can't decide if are important. Overall kept my interest with interesting writing and storyline

Listened without stopping, which is a sign of a really great book, that is all.

A Striking Piece of Horror

Brian Evenson isn’t as talked about as a number of horror authors, but he knows his stuff (I believe he even directs the creative writing program at Brown). His prose is pared down, free of a lot of the (frequently unnecessary) details one might expect; but the style doesn’t feel like the result of a lack of skill or planning. Instead we end up with a really interesting novel that plays with structure in some intriguing ways — many encounters and scenes early on are mirrored and echoed in later sections.

There is a lot of gore, but it’s presented in such a manner of fact way that it doesn’t feel particularly gore-y.
Strongly recommended.

story is crazy and you're on a roller coaster ride the entire time. Guess this genre just isn't my cup of tea. but still, good ride

It was merely ok

I thought this novel could have been so much more but it really wasn't. The plot was interesting enough however there are more than a few points where it drags and the reader is going to be bored. Overall I would say that there are much better reads out there.

It just keeps getting weirder all the way through!

What did you love best about Last Days?

The creativness of the next twist in the story.

Have you listened to any of Chris Patton’s other performances before? How does this one compare?

Who was the most memorable character of Last Days and why?