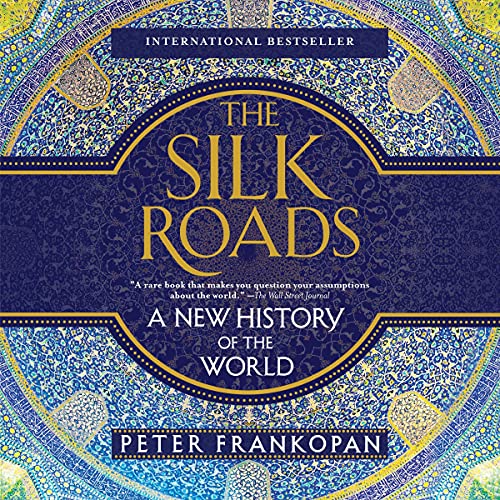 “This is history on a grand scale, with a sweep and ambition that is rare... A proper historical epic of dazzling range and achievement.” (William Dalrymple, The Guardian)

It was on the Silk Roads that East and West first encountered each other through trade and conquest, leading to the spread of ideas, cultures, and religions. From the rise and fall of empires to the spread of Buddhism and the advent of Christianity and Islam, right up to the great wars of the 20th century - this book shows how the fate of the West has always been inextricably linked to the East.

Peter Frankopan realigns our understanding of the world, pointing us eastward. He vividly re-creates the emergence of the first cities in Mesopotamia and the birth of empires in Persia, Rome, and Constantinople, as well as the depredations by the Mongols, the transmission of the Black Death, and the violent struggles over Western imperialism. Throughout the millennia, it was the appetite for foreign goods that brought East and West together, driving economies and the growth of nations.

From the Middle East and its political instability to China and its economic rise, the vast region stretching eastward from the Balkans across the steppe and South Asia has been thrust into the global spotlight in recent years. Frankopan teaches us that to understand what is at stake for the cities and nations built on these intricate trade routes, we must first understand their astounding pasts. Far more than a history of the Silk Roads, this book is truly a revelatory new history of the world, promising to destabilize notions of where we come from and where we are headed next.

“This provocative history challenges the view of the West as heir to a pure Greco-Roman culture. For Frankopan, the brutish West owes its more enlightened traditions to the lands east of Italy and west of China, which were, for centuries, 'the centre of the world'… Frankopan marshals diverse examples to demonstrate the interconnectedness of cultures, showing in vivid detail the economic and social impact of the silk and the slave trades, the Black Death, and the Buddhist influence on Christianity.” (The New Yorker)

“In his new book, The Silk Roads, Frankopan has created something that forces us to sit up and reconsider the world and the way we've always thought about it… The book takes us by surprise right from the start.” (Nishant Dahiya, NPR)

“This is deeply researched popular history at its most invigorating, primed to dislodge routine preconceptions and to pour in other light. The freshness of… Frankopan’s sources is stimulating, and their sheer range can provoke surprising connections. He likes to administer passing electric shocks… The sheer abundance of Frankopan’s information can become an omnivorous pleasure, and its details add color and particularity to his text… He plunders data magnificently... A brave, subtly personal project of inspiring ambition and epic scope.” (Colin Thubron, New York Review of Books)

See the underlying currents of history affecting us today.

Excellent performance by the reader, good use of accents for quotes.

Insights into civilization’s center of gravity moving back towards its origins after a 700 year sojourn in the West.

Politics, religion and military campaigns covered in depth, but not much mention of science and technology.

truly one of the few books which encompass such a broad geographic and temporal range without compromising research quality or debasing itself with political or ideological biases. highly recommended for any history enthusiast who would like to fill in a few blanks

As others have noted, this is not only a history of the Silk Road(s). It is a history of the area of the world known as, and the rest of the world's engagement with, the "Silk Road." I got a nice refresher course on European/American colonialism in the Middle East, the Iran/Iraq war, and the Iran/Contra affair from the 1980s, for example, none if which I associated with the Silk Road, per se. I am in no position to speak about the lack of inclusion of China and India in this history, as others better equipped than me have noted. I'll take their word that there's more to the story on those fronts. The author does address China's rise in the conclusion, but the books publication date of 2015 means there's not a single criticism of China's ethnic cleansingvof the Uighars. The author validates China's crackdown on Muslim "terrorists" in the western provinces withoutvbatting an eye. again, 2015 perspectives. And the cloncluding thesis that the Silk Roads will rise again due to vast oil, natural gas, and coal reserves looks different in our 2021 Covid pandemic and climate change world. All in all, a valuable "read" (listen). I learned a lot. The voice reader contributed well, but was on the edge of overacting foreign accents. Unseemly, these days, for a British reader to puy on an Indian accent. And he does a terrible American accent. Comes out almost as Irish! Those American "R"s trip people up.

An Absolutely SUPERB Book for Lovers of History

This is probably the single best overall history book that I've come across in all of my years of being a history lover. The author, Peter Frankopan, takes the unique course of following the roads of history created by commerce, rather than by military exploits, political personalities, the rise and fall of empires or cultures, focus on particular historical periods, or other commonly used methods for conveying history according to what the author is wanting to get across. He has done a masterful job of beginning at the beginning of recorded history (the "beginning" as defined by traditional historians) and moving in a seemless, flowing progression to today. Unlike the history taught to most of those of us educated in western educational systems, he makes the huge landmass of Asia the focal point and moves outward from there, as times and events require. He fills in beautifully most of the huge gaps that have been systematically excluded from western curricula.

I've found this to be an extremely well-written big picture history book which pulls much of the seemingly disconnected bits and pieces of history together into one coherent whole. Kudos to the author!

I must also say that the reader, Laurence Kennedy, is one of the best, maybe even THE best, reader of the sixty-odd books that I've listened to on Audible. He's a pure delight.

Overall, I HIGHLY recommend this book to anyone who is looking for an excellent overview of world history.

Really love this book. Interesting perspective on world history. I am looking forward to listing to a few others by the same author.