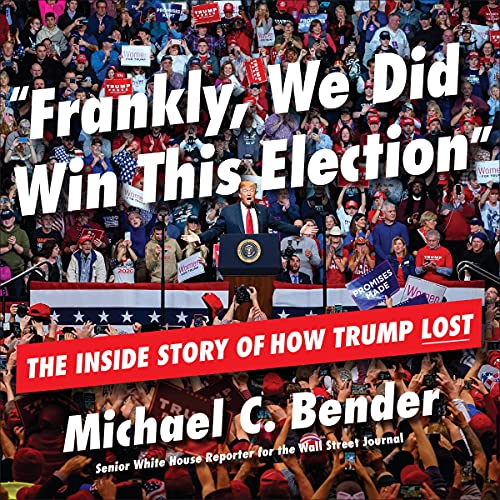 Frankly, We Did Win This Election

Michael C. Bender, senior White House reporter for the Wall Street Journal, presents a deeply reported account of the 2020 presidential campaign that details how Donald J. Trump became the first incumbent in three decades to lose reelection - and the only one whose defeat culminated in a violent insurrection.

Beginning with President Trump’s first impeachment and ending with his second, Frankly, We Did Win This Election chronicles the inside-the-room deliberations between Trump and his campaign team as they opened 2020 with a sleek political operation built to harness a surge of momentum from a bullish economy, a unified Republican Party, and a string of domestic and foreign policy successes - only to watch everything unravel when fortunes suddenly turned.

With first-rate sourcing cultivated from five years of covering Trump in the White House and both of his campaigns, Bender brings listeners inside the Oval Office, aboard Air Force One, and into the front row of the movement’s signature mega-rallies for the story of an epic election-year convergence of COVID, economic collapse, and civil rights upheaval - and an unorthodox president’s attempt to battle it all.

Fresh interviews with Trump, key campaign advisers, and senior administration officials are paired with an exclusive collection of internal campaign memos, emails, and text messages for scores of never-before-reported details about the campaign.

Frankly, We Did Win This Election is the inside story of how Trump lost and the definitive account of his final year in office that draws a straight line from the president’s repeated insistence that he would never lose to the deadly storming of the US Capitol that imperiled one of his most loyal lieutenants - his own vice president.

Narrator is a robot

Returning this because I can’t deal with the robotic narration. It’s like text to word to have a robot read it

If you're interested in the true story of how Trump lost his 2020 reelection bid, this is it. This is a deep behind-the-scenes report of exactly how the Big Lie got started, including the events leading up to it, Rudy Giuliani's role in creating it, and its violent aftermath, In broad strokes much of the story will seem familiar because it was in the news every day, but the book also reveals many details that have never been reported before, such as a blow-up finger pointing shouting match between Trump and Pence. This book also delivers unique insights into the mindset of DJT's most devout supporters and why they choose to believe in him. Overall, it's simple, straight, fact-based reporting from a respected news source. A riveting and well narrated look at what really happened.

Gems of hidden truths of this man. Follow the lies and contempt which led to the unrest and separation we see today. So sad a Nation can become so divided. Will American ever be truly free is a question we all ask…

This book has good information, but also flaws.

The intention seems to be that this is to read as a levelheaded report, but it seems that it has a bit of an apologetic slant. 99% of the reported behind closed doors comments from Trump are exactly what he needed to say in public at the time, to show some semblance of sanity. Its almost too perfect that he'd have so much to say in earnest, that would have made him more popular, and he ostensibly refused to say it. I'm not going to say that the author is downright subservient to the former president, but it seems that his job at the wall street journal, and therefore at News Corp, might actually depend on him finding a balance between real reporting, and apologetics.

At one point in the book, the former president's minions try to use the author to launder their own message through a more respectable news source, and I can't help but wonder if that's what the whole book actually is.

This book is terrifically interesting especially the last 3 chapters. However all throughout there were nuggets of information I'd never heard before

Nothing you haven't already heard

This book isn't very detailed and you learn nothing new. Unlike Landslide by Michael Wolff, I found myself sometimes bored and tuning out instead of listening intently.

I wish there was more information pertaining the timeline of the insurrection, especially when Biden made his speech, but that’s my opinion.
This was an interesting read, especially talking to the people that supported the former president.
I don’t know if I will listen to the other audiobooks about the former president, but this was a good book.

Detailed, in-depth and well written. Not my usual genre but I was so entranced with insiders scoop. My mind is blown. Recommend this book to everyone!

So much more than I knew

I have been glued to MSNBC, newspapers, NPR, etc. but there is more behind the scenes horror than we already knew. Reading about the repeated assaults on our government, the judicial system, common decency we’ve observed made this book’s ending more heartbreaking. This guy is golfing every day and enjoying adulation and standing ovations at dinner every evening. Nauseating. But for the constant lies, infighting and backstabbing all around him, he could have done even more damage than he did. Awful, awful man.

I found myself constantly skipping ahead to avoid long stretches of uninteresting story lines. The narrator’s voice added to my increasing boredom. Yes, Bender seems well-sourced but goes down paths that only tangentially figure in to the central theme. Overall, a disappointment.

This was a fascinating book about Trump and his fly-by-the-seat-of-your-pants administration. It was amazing to read the details about, and how, the administration worked its way around the issues, as well as the made-up issues, that they wanted to support. It is frustrating for a full-on Democrat, such as myself, to know what went on, and then find out that things were actually worse than originally thought. I am sure this thought is true for many anti-Trumpers. I appreciate this author’s accounting of the truth about Trump and his thrown together administration!

What's up with the female references?

Throughout the book Hope Hicks is referred to as Hope when the men except Trump family members were last name or first and last, for example, Stepian. Is that because she is a relatively young woman, perhaps a GIRL? In at least one sentence a woman is addressed by her first name while men by their last. For example, Kelly Ann and Meadows. Is she a girl, too?


This is inexcusable for a journalist with a top publication and an impressive wife, MIKE.