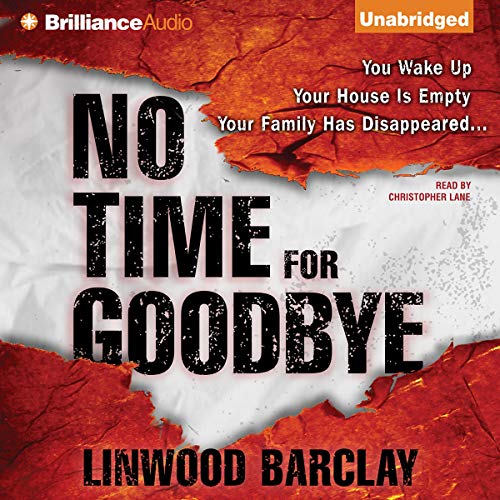 No Time for Goodbye

The house was deathly quiet. That was the first sign that something was terribly wrong. Fourteen-year-old Cynthia Bigge woke that morning to find herself alone. Her family - mother, father, and brother - had vanished without a word, without a note, without a trace. Twenty-five years later, Cynthia is still looking for answers. Now she is about to learn the devastating truth.

Cynthia and Terry Archer still live in Milford, Connecticut, not far from the old Bigge house on Hickory Street. With a solid marriage and a young daughter, the Archers seem on track for a successful future. But the questions raised by Cynthia's past still haunt her, and her obsession with finding the answers threatens to destroy everything they've worked for. For Cynthia, there can be no closure until she finds out why her family disappeared - and how they could have left her behind.

Terry thinks the segment on the popular TV crime-stopper program Deadline is a mistake. But his wife hopes that someone watching will have a lead to her missing family. Sure enough, it's Cynthia who spots the strange car cruising the neighborhood, hears the untraceable phone calls, and discovers the ominous "gifts." And as Cynthia's nerves begin to unravel, no one's innocence is guaranteed, not even her own.

By the time the first body is found, it's clear that her past is more of a mystery than she ever imagined - or may ever survive. Someone has returned to this Connecticut town to finish what was started 25 years ago. And by the time Terry and Cynthia discover the killer's shocking identity, it will be too late even for goodbye.

"No Time for Goodbye just flies off the page. It's a one-sit thriller. You sit down with this book and you won't get up until you've turned the last page." (Michael Connelly)

"A mystery masterpiece is read by a master narrator.... [Narrator Christopher] Lane exploits Barclay’s breathtaking momentum, building to an edge-of-the-seat climax and superbly portraying every character - killers, detectives, friends, a memorable mobster, and his comical gang. Not to be missed!" (AudioFile)

wonderful book - kept me intrigued all the way thr

loved it! kept me intrigued all the way through. definitely would recommend it. great story.

I very much enjoyed this book. hard to turn off. loved every turn and twist.

The story had a slow start and I almost gave up on it but certainly glad I hadn't. It had quite a few twists and turns that kept me wanting to listen to more and more. The performance of the narrator was captivating and I enjoyed his performance immensley. I highly recommend this audio book.

Best of the Best

Grabs you and hangs on to you until the very end. Cleverly written and even as you start to figure it out there is still more to come. would make a great television series.

Loved this book. Good twists and the characters were well written. I believe I will be looking for more from this author

I enjoyed this book

I enjyed this book. The mystery of what happened to her family kept me reading. The ending was a bit of a surptise, but believable. A good read.

A good story with twists and turns that take the reader on a wild ride. Narration is good with character voices that are recognizable. I thoroughly enjoyed this book and I’d recommend it to readers who enjoy a mystery story.

The last quarter of the book was good. Overall, it too a long time to unfold. The character of Cynthia became redundant and winey without change.

Too wordy and drawn out!

This book started out with a good story, however it took far too long to actually arrive at any action. The plot moved along very slowly and I almost gave up on it. I persisted until the end and all the loose ends were tied up. I found that the Roley character was not really needed and the story could have been shorter.

This book seemed for long the most simple, boring story I've acquired in my library. The first 15 or 24 chapters nothing was really happening, you can easily skip and not lose anything. For those who kept listening the story picks up and becomes more intriguing till its happy ending.

No Time for Goodbye gets 5*s all around

Where does No Time for Goodbye rank among all the audiobooks you’ve listened to so far?

I have so many books in my library I have a hard time rating them on order but I would say it falls in the top half.

The best part of this book is that it's conclusion is so far off from what you think it's going to be. Good plot with some really good twists and high tension.

Which character – as performed by Christopher Lane – was your favorite?

Christopher Lane did a great job on all

Not extreme but melancholy. Linwood Barclay tends to put these zingers in at the very end and the last maybe 4 - 5 minutes get you every time.

This is a really good listen. I wasn't sure I was going to like it. The first part of the book starts out with the disappearance of a family minus the daughter. Her life is spent looking for them and wondering why they just up and moved with out her. I thought it was a little hokey but then as people started to get involved in the hunt for the family they started getting murdered and then it just kept getting better and better with one heck of a conclusion that will knock your socks off. It's worth the credit!

Living overseas, in a land where English-language books were very difficult to come by, I found myself reading all kinds of books I probably wouldn't have picked, had there been more options. I remember picking this book up, having never heard of either it or the author, and not having high expectations. Boy, I was wrong.

I was captivated from the first page -- the story moves along at breakneck speed, and not for quite a while can you even begin to imagine how such a thing could have happened: a teenage girl wakes up after a late night with her boyfriend, and finds that the rest of her family has simply disappeared, gone, without a trace. In spite of all the investigations and publicity at the time, nothing is ever discovered. The family just disappeared.

At some point, Barclay allows us to see how the solution to the puzzle could have occurred -- only things are never quite that simple.

So back then, years ago, in a country far away, I remember finishing the book, putting it down with a "Huh! Didn't see THAT coming..." and after wiping a few tears off my face, thinking, 'Wow. What a book!'

It IS quite a book. Still is. It's not Great Literature, maybe, but in terms of genre, one of the best. As an Audible book, this one was especially good because of the narrator, Christopher Lane. He narrates with exactly the right intonation -- sort of a befuddled-but-tolerant father figure, which is exactly right. Perfect for Terry Archer, a mild mannered wry-humored English teacher, husband of Cynthia Bigge, who was the teenager who lost her family. Archer never experienced any of the mystery himself, but nevertheless, he's the one who has coped with Cynthia's lifelong struggle with her loss. When things start to happen, it falls to him to figure it out.

To say much of anything more could spoil it, so I won't. Just know that this is a really good listen.

I truy enjoyed this book!

I was engaged from the first soundbye. The author does a fine job of creating twists and turns that are entirely plausible. That doesn't happen as often as one might think in the realm of the mystery books. I know most will find this book a great escape.

Once again Barclay has done it. It was a good story, kept me guessing and had good characters. What more can you ask for in a mystery? I think the best thing about Barclay is that you can start with any one of the books. They are not all centered around one detective or group of characters. They are all different and all good. This was the last one on Audible so Barclay better keep writing!

Well worth the time.

No Time for Goodbye was a great listen. Suspenseful, well written with good plot twists, but not annoying plot twists. There were a few great secondary characters. I particularly enjoyed the student, Jane, and the thug. The narrator was good, my only criticism would be the Jimmy Stewart imitation for Clayton Bigg and the German accent for the psychiatrist. I found these two a bit distracting, fortunately, they didn't get a great deal of air time. Overall, I really enjoyed it and will definitely listen to another Linwood Barclay book.

This mystery had a very interesting storyline which added to it's intensity. There were a couple of places in the story that was a little over the top and unbelievable, but that didn't diminish my interest in wanting to know what happened to the girl's family.

A fourteen year-old girl's parents and brother are missing and presumed dead. After twenty-five years, the plot behind their disappearance starts to crumble. There were twists and turns with such intensity that kept me wanting to know what was going to happen next. Overall, the story ended well with all the strings pulled together into a logical bow. Again, this was an interesting mystery narrated by Christopher Lane who did a good job, not his best narration but good enough. Lane has a strong voice and he articulates nicely.

This is a real cliff hanger right to the end

I really enjoyed this book. The plot twists and turns clear to the very end. Every time you think you have everything figured out another twist pops up. Yes, there is even a cliff involved.

The story is about a 14 year old girl that wakes up to find the rest of her family has disappeared without a trace. Most of the events take place 25 years later with Cin trying to figure out what really happened to them.

Loved The Protagonist in This Well Written Mystery

A solid mystery writer and a great narrator. Is there anyone that narrates the detective/police procedure/mystery role with more class than Christopher Lane? His consistant low-key voice is so likable and believable. This novel has an unusual mystery storyline. The author chooses to bring the reader in on the mystery about 2/3 of the way through the book, just in time for the chase. I am very hard to engage as a reader, and this novel kept my attention until the end. There is a lot of talent within these pages.

Interesting start, went off a cliff along the way

The main characters were nicely developed but surrounded by caricatures of people who behave in dumb ways that just don't make sense. No nuance or mystery in this childish plot.

This author has a way of writing that just grabs from the beginning --and makes it nearly impossible to find a good stopping place. Oh, and an added plus to this one is the narration by Christopher Lane. Loved it.

Linwood Barclay writes about everyday people--who experience unexpected and sometimes deadly events. They are stories that make you think --this could happen to me, to my family, to people I know.

In No Time For Goodbye the theme is one you may hear of in current news stories--not everyday, but often enough. If you have not tried this author before- this may be a good one to start with.