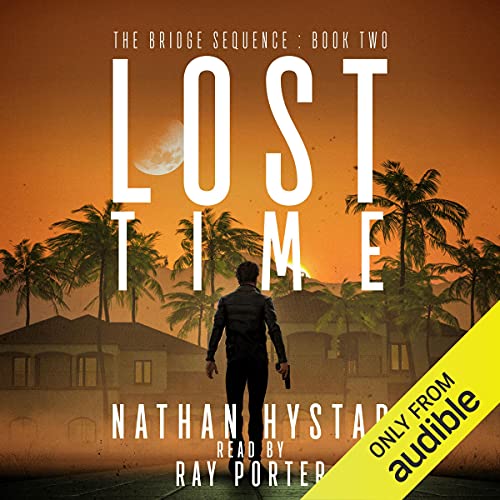 The Bridge has been triggered, but the surprises don’t end there. What Rex found on the other side was unsettling, and with fresh information, he must race against time with his new allies as they search for their salvation.

The mysterious objects are closer, nearly at Earth, and the efforts of the alien cult have reached a devastating level. Fear escalates as the entire planet senses the global threat, but Rex is more determined than ever to prevent what’s coming.

With the startling revelation of a team member’s identity, and the painful betrayal of someone he’d always trusted, Rex must cast aside his anger and focus. Otherwise the imminent arrival might just be as catastrophic as the cult predicts.

Rex Walker finds himself at the precipice of history, but which side will humanity land on? Lost Time is a fast-paced thriller full of hope, loss, reconnection, and adventure.

Excellent
lost sleep over this one, could not stop. reading!!! ?Cannot recommend strongly enough. DOIT

this series has me!

A great combination of writer and performer, professionally produced. Totally fascinating plot, with enough twists and turns to keep even the most jaded listener engaged. This is a near classic sci fi series, well worth the credits. Totally recommended!

This is another great story line and can’t wait to read the next book. Full of twists and turns. Hard to stop listening!

This series is excellent. Nathan Hystad consistantly puts out amazing books. If you have not gone through the Rise series, you are missing out there. I was already pre-ordering books 2 and 3 of this series even before I finished with Book 1. Ray Porter is his usual masterful self.
.
Do you love Ray Porter and all his work? Come visit us at 50 Shades of Ray on Facebook:
https://www.facebook.com/groups/RayPorter
.
Do you love Science Fiction? Come join us at Science Fiction Superfans on Facebook:
https://www.facebook.com/groups/599934500518592

Wow, nice add to the first book and now can't wait for the next book to finish the story!

This series is good, but it lacks some unique qualities. it reminds me of Indian Jones.

Bought book 2 before 1 so had to buy book 1 and read first. I thought it a little protracted. The endless cat and mouse did get somewhat boring and I would look at the time left on the book and say to myself, how can this so on for another 2 hours. I will get book 3 but may read another book in between but I am interested to know what happens. As always loved Ray Porter’s performance. That is why I bought/will buy this series.

This book was more about the character development and backstory. Don't get me wrong, it was still great! Really helped me get into each character more, like/hate them more (depending on the character), and still had plenty of action moving to story forward. That doesn't mean it was slow, far from it! I had limited time here and there to listen to it. I never liked having to stop it and looked forward to the next time I could listen. An excellent 2nd book continuing this series that I highly recommend! And of course Ray Porter again does an outstanding job!!

The story picks up immediately where it left off and we get a lot of answers to questions from Book 1. Not only answers but also much more ACTION. This book keeps you on the engaged from the start and doesn’t let up. Ray Porter is masterful.