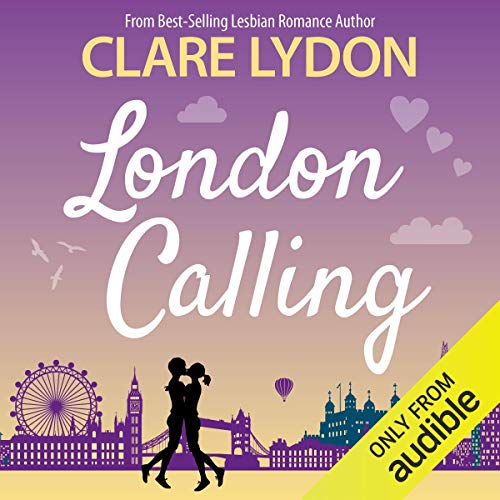 A breakup. A mix-up. Will there be a makeup?

Jess Sharp's life hasn't exactly gone according to plan. She's 32, unemployed, and single after a devastating breakup. She's also left Australia for London to live in her parents' spare room. Her chaotic life seems to be spiraling until she meets someone who could be a game-changer.

She's optimistic after a wildly successful first date, but far too much tequila and the ghosts of girlfriends past may drag her far below her lowest point. Can she win the race for romance without tripping?

London Calling is the first book in a series of lesbian romance novels. If you like punchy drama, wicked humor, and charming British characters, then you'll love Clare Lydon's hilarious debut novel.

Clare Lydon is one of my favorite authors in the lesfic genre. Her books always bring a smile to my face and leave me feeling wistful and satisfied. This tale of Jess's return to London after a sordid heartbreak is the first in Lydon's London Series. We get to watch Jess stumble through getting back to a life in London as a single thirty-something looking for love. Jess meets up with Angela, Karen and Lucy and it is a fun read to discover where her happily ever after will take her.

I had already read London Calling so I was a little hesitant to listen to the audiobook because when I do that, the narrator's performance never lives up to what I have already imagined in my head. This was not the case here. If anything, the narration just brought more life to the incredibly witty dialogue that I have come to expect from Ms. Lydon. The production quality was good and Emily Bennet did a good job of creating a robust cast.

Note to buyers: The performance and sound quality of the sample that is provided here is mediocre at best. The actual audiobook sounds much better.

This is a lovely light romance. I enjoyed it and recommend it for anyone who loves light, fluffy and fun

One of my favorite Clare Lydon books

I love this book so much! I'd read it previously on my Kindle, and it was just as good - if not better on audio. I started it up in the car with my wife in the passenger seat...and now, Clare Lydon officially has a new fan. If you enjoy sitcom-style humor, realistic characters and unfortunate incidents that make you cringe, I can't recommend this book highly enough!

loved it, very entertaining with good humor definitely listening tho the remaining books in the series

Another great one from Clare Lydon!!

Good storyline and characters. It was touch and go for the main characters...lol, I just shook my head at times. I felt like this could have been a real life situation. The narrator was the absolute best, I love her voice! Overall great book, I'm starting to really enjoy this author! Highly recommended!

I enjoy very much Clare Lydon style, her stories are always captivating, this story in particular is a very witty, funny, enjoyable romance, about all the misfortunes Jess goes through from the heartbreak moment and leaving Australia, I found very interesting how things went on as soon as she’s back home and how she felt out of tune on her return to London after being away for a while, finding a new love interest without being part of her plan, but a welcome thought at the end, and then again life turned out to be everything but boring for her, and can’t help but think how amusing it is her winding road through her brand new relationship while navigating and trying to avoid her ex-lovers that want her back, creating so many mishaps and misunderstandings between her and Lucy, but glad that at the end they found their way and happy ending. It’s a fun romance to hear. Loved the British accent, Emily Bennet does a great job with the voices, I won’t deny at first felt a little robotic but warms up nicely and ends up being fantastic, also the quality is grand.

I read the actual book awhile ago so, since a new book in the series is coming out I needed to refresh as I didn’t quite remember everything and I like listening to stories on my runs. I’m very glad I did as I’d forgotten how much I enjoyed this book the first time around. Jess was frustrating at times with her decision making or lack there of but I loved her chemistry with Lucy l, friends and family. I liked the narrater as well. Some of my favorite books have excellent narrators but they have an American accent. Nothing against that as I’m American but it kind of throws yo off. It was nice hearing a British accent. Can’t wait to listen to the rest of the series!

Despite the mishaps and missteps that the main character lives through, the guaranteed happy ending does not disappoint. Well drawn and likable characters make this story delectable and there is enough tension and mystery to keep you guessing too. Clare Lyndon writes another London romance with a bit of international travel included. Jess and her family are where we all want to be - living with love in London.

This book was not easy to get through. It was unremarkable in every way, which surprised me because I love most Clare Lydon books. The narrator wasn’t my favorite but I won’t hold it against her because she was honestly trying to make something from nothing. This was as bland as unseasoned chicken breast and I was honestly quite relieved when the book ended sooner than I expected it to. Literally nothing interesting or exciting happened in the entire length of this book. Skip this one and save yourself from the monotony of Basic Brenda is left broken-hearted by a woman aptly named Karen then meets Boring Brittany and falls in love.

This book was super slow. I think it was 6 hours in before we got to the first date. So many details that read more like a rigid journal than a romance story and really there was no character development. We got lots of story details but very little actual story.