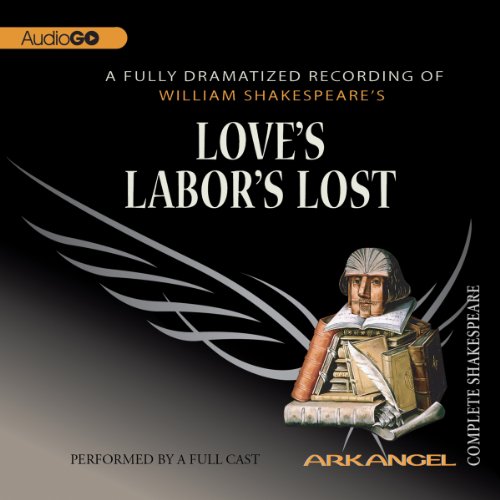 A play replete with puns and double-entendres, this is one of Shakespeare's earliest and most lighthearted.

The young king of Navarre and three of his courtiers have vowed to lock themselves away for three years of study and fasting, and to forswear the company of women for this period. No sooner is their vow made than it is tested, however, as the princess of France and three of her ladies arrive in Navarre on a diplomatic mission. The young men fall instantly and hopelessly in love, and the tension between their vow and their passion forms the subject of this charming and sparkling early comedy.

Berowne is played by Alex Jennings and Rosaline by Emma Fielding. Samantha Bond is the princess, and Greg Wise the king of Navarre. Alan Howard plays Don Armado.

The plot was a bit underwhelming but the dialogue was nearly razor sharp. Sometimes, Shakespeare's early plays just seem like discoing dervishes in a mirror-adorned room. As a reader we are amazed, dazzled, and distracted by all that is going on, by the spinning virtuosity of Shakespeare's words, by his absolute mastery of the English language, by his dash, his deft slight-of-tongues, but there just doesn't seem to be enough central narrative gravity to IT to pull the reader completely through it. It just seems heavy on the baroque icing and less focused on narrative complexity.

Shakespeare data dumps his genius for wit, flirtatious innuendo, and language with some fantastic lines, but wasn't flirting with a fully developed form yet. I feel like I'm looking at early, beautiful Picasso sketches, Da Vinci cartoons. But I want more. It really isn't you Shakespeare it is me.

Still, the play is fun, a frolic, a half-jest and nudge. It is also Shakespeare playing with the comedic form. He is rejecting and twisting the form to suit his wishes. Not yet the master of the English World, he is playing the master he will soon be.

I can't disagree too much with Harold Bloom: "Love's Labour's Lost is a festival of language, an exuberant fireworks display in which Shakespeare seems to seek the limits of his verbal resources and discovers that there are none."

Some of my favorite quotes:

― “Never durst a poet touch a pen to write
Until his ink was tempered with love's sighs.
...
From women's eyes this doctrine I derive:
They are the ground, the books, the academes,
From whence doth spring the true Promethean fire” (Act IV.3).

― “They have been at a great feast of languages, and stolen the scraps” (Act V.1)

― “O, they have lived long on the alms-basket of words. I marvel thy master hath not eaten thee for a word; for thou art not so long by the head as honorificabilitudinitatibus: thou art easier swallowed than a flap-dragon” (Act V.1).

What made the experience of listening to Love's Labor's Lost: The Arkangel Shakespeare the most enjoyable?

The performance is splendid and very engaging.

Samantha Bond as the Princess of France. Her voice is unique and her delivery always has an undercurrent of deliciousness.

On the other hand, she's the only character I recognize, and since Amazon/Audible doesn't think it is important to credit all the players with their parts in recordings of theatrical works, I might single out another character/performer but I have no idea who they are.

Amazon/Audible: are actors just fungible? Do they not matter? Why is a cast list (by character) not provided with EVERY recording of a play or other theatrical work?

Well this question itself demonstrates Amazon/Audible's lack of understanding of what recorded drama is. THERE IS MORE THAN ONE NARRATOR!!!!!

But, the players in this recording are all wonderful, speaking freely, clearly and with great engagement. Their tone is contemporary, clear, and playful.

In addition to my comments above referencing the way Amazon/Audible obscures the actors and their roles in these recorded plays (yes, its that way with EVERY Shakespeare recording you sell), it is beyond frustrating to have this recording delivered with two "chapters" and no option for a proper Act/Scene breakdown. Each Act and Scene should be a separate track, so that you can easily listen to just a particular scene.

Really funny and very well-produced. Love the parody of scholarship (e.g. "how many inches in a mile?"), and I am a professor!

Performance great, but not Shakespeare's best

I went to see this play up in Oregon, and I have to say that this Audible performance was so much better than the live play up there. It was a great way to preview the book, and to understand everything first. This was so much better than the live performance that I will always listen to Audible's Shakespeare first. Very well done. As far as the story goes, it was OK, but other comedies like As You Like It, Twelfth Night, or Midsummer Nights Dream, for example, are much better.

The Arkangel team gives this the old college try, but it's not one of Shakespeare's better efforts. There's not much plot, and most of the humor depends on double entendres that are buried so deep in Elizabethan slang they're incomprehensible.

Of all of his plays, this is one best listened to with a good annotated text at hand. How else to make any sense of (for example) someone having an "incony vulgar wit"? Or the reference to "honorificatudinatatibus"?

That's not to say there aren't pleasures to be had. In one scene, the four men who have forsworn the company of women are caught, one by one, reciting love poems to the women they've just fallen in love with. The staging is deliriously symmetrical. In another scene, the men disguise themselves as Muscovites and present a Russian dance to the women.

But the play ends on a sad note: one of the women, a princess, receives word that her father has died. The romance is suspended; Jack hath not Jill, as one of the characters says. The women get ready to leave, but promise to return in a year and see if the men have been suitably serious in the meantime.

In fact, there's some evidence that Shakespeare did write a sequel, called "Love's Labor's Won," but if he did, it's lost. And that makes me almost as sad as the play.