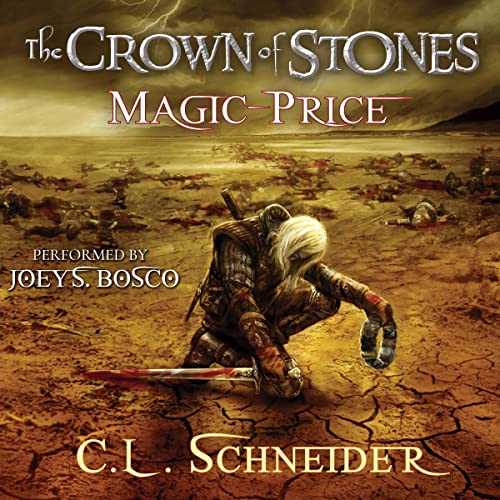 All he wanted was to end the war. Fate had other plans.

Ian Troy is one of the Shinree, a fallen race born with an addiction to magic. Enslaved and drugged to suppress their deadly desires, the Shinree live to serve their masters. After years of forced combat in Rella's long, brutal war, Ian is desperate for peace. With defeat imminent, he defies orders and wields the Crown of Stones, an ancient relic of untold power. Ignorant of the artifact's true nature, he ends the war, but pays a terrible price.

A decade later, Ian is still running from the blood in his veins and on his hands. Curbing his cravings with wine and regret, he struggles to forget. But when a fateful encounter with a pretty assassin brings him down that dark path again, Ian's addiction is awakened - and denial is no longer an option.

With the realm he gave up everything to protect once more in jeopardy, Ian becomes embroiled in a violent race for control of the Crown of Stones. As the deceptions unfold, his path becomes clear: To save the realms, he must embrace the one thing he fears most: His own power.

Magic-Price is the award-winning first installment in The Crown of Stones trilogy.

Note: This audiobook is an updated version with a new narrator.

The Crown of Stones: Magic Price by C.L. Schneider
Narrated by Joey S. Bosco
Five Stars
This is the first book in the Crown of Stones trilogy. Magic Price is the amazing beginning of this awesome series. Ian Troy is a Soldier Shinree. When he finds and uses the Crown Of Stones, his life spins out of control. After ten years of running, he must make a difficult decision to lead the resistance and learn to harness the magic to save the Realm and his people, the Shinree. He learns the truths about his heritage. The world that Schneider created with this trilogy is truly brilliant, so detailed it feels like you are part of what’s happening and can personally interact with the characters because you know them so well.
This is the first book I have listened to by this narrator. He really makes the story amazingly lifelike. I enjoyed his voice and inflections of the different characters. I have read these books before I got the Audiobook, but I appreciate the story more with the audio. I recommend this trilogy to anyone who loves sci-fi, fantasy or just plain action adventure. I suggest if you're going to read it start at the beginning with The Crown of Stones: Magic-Price, Magic-Scars and finally Magic-Borne. This series is amazing and magical!

This is the second book by this author I listened too and I love it... The length of the books is great! I love audible books so this is a plus. The audible is great the narrator is great. I've had books that bug me because of the narrator, but not here. Any series by this author, wether book or audible, you won't be disappointed!! Can't wait for the next book !!

This book was a fantastic read! the author builds you a world with so much fantasy magic intrigue, action, politics, drama and a hard headed lead character you can't help but cheer for, be frustrated with and love despite his flaws.

follow Ian Troy through a world where magic is dangerous and the users of it aren't free, in fact drugged and kept as slaves... but Ian managed to find a way to have some freedom but the secrets around him are deep and you will keep unlayering them the further you go and feel his hurt anger and confusion as he finds out more about himself and his heritage.

I cannot wait for the 2nd book on audible because this reader was the perfect voice for Ian and gave so much more depth and life to the character listening to this!

Magic always comes at a cost

Sometimes an audiobook helps to bring a story to life and other times it makes it more difficult to fully enjoy the story. In this case it definitely helped bring the story to life. Right from the start the listener (reader) is captured inside a world full of wonder. The main character is a Shinree, a race that has the ability to use magic but it comes at a cost. Any time they use magic it costs not only life around them but it feeds the individuals addiction. The main story takes place 10 years after the war in the prologue and shows the world after the cost has been paid.

I absolutely love audio books like this! The narrator truly brought these characters to life, and I easily imagined every chapter vividly.
Fantasy stories were made for the audiobook world, and they are soo fun to listen to.

This story Ian Troy who is a Shinree. A race enslaved and abused due to their magic addiction. When I can take the drugging and forced combat he defies his queen by using the Crown of Stones.
He ends a war but unleashes something terrible. The story takes us through Ian's journey to overcome the downfall of his people and to embrace his true self. Will Ian overcome his fear, or will he be the reason for his own downfall.

The price could be more then expected

Ian Troy is a Shinree, his race is what sets him apart from other races. He also comes with an addiction for magic. Only problem is his magic can kill everything and everybody in his path. Being of the Shinree race he must serve his master, even if that means going into battle. Having blood on his hand and the death of many. He decides to escape, but as far as he runs, everything catches up with him. I enjoyed this story, at times I felt as though I was in a race. This author has an eye for detail. The characters fit their description given by the author. Having read many book in this genre, I found this one just as entertaining and complete. This story makes for a great road trip. I recommend reading or listening to this story as it will not disappoint.

Magic to die for!

The story was phenomenal. It grabbed me in the prologue and didn’t let me go till the end.
It was a great take on magic. It can’t be used without a price, something living has to die. I haven’t heard of that take before that I remember. That part alone had my interest.

The story line was great also. Ian Troy is a Shinree soldier. He has the magic for battle, yet is kills everything and everyone around when doing it.
This type of power is hard to control.

Troy is running from his past. But now he has to go back to battle for his nation. But after vowing to never use his magic again, after a terrible loss, will he be able to help??

The narrator was on point with changing his voice and tone for each character. It made the story worth listening! I would love to listen to more books read by him.

The Price Of Magic

C. L. Schneider's dark fantasy was amazing. The author's world building was complex. Her characters were intense and convoluted. Her story was dark and fast paced. There were some sexual scenes depicted, there was some use of foul language, and there were scenes of battle and gore, so this book is for more mature readers. I am looking forward to the next story in the series. I recommend it to other mature readers who are entertained by this genre. Joey S Bosco's narration was great and his portrayal increased my enjoyment of the tale. I was given a free copy of the audiobook and I have voluntarily left this review.

The voice acting was the best part! it really transports you to another world and helps immerse you into the story. The quality of the audio and wide range of expressions really helped to sell the story.