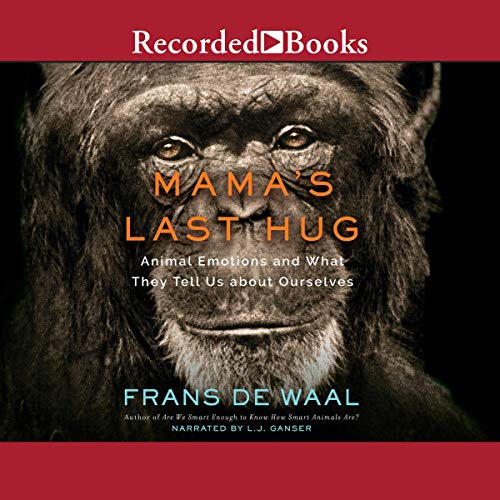 Mama's Last Hug opens with the dramatic farewell between Mama, a dying 59-year-old chimpanzee matriarch, and biologist Jan Van Hooff. This heartfelt final meeting of two longtime friends, widely shared as a video, offers a window into how deep and instantly recognizable these bonds can be.

So begins Frans de Waal's whirlwind tour of new ideas and findings about animal emotions, based on his renowned studies of the social and emotional lives of chimpanzees, bonobos, and other primates. De Waal discusses facial expressions, animal sentience and consciousness, Mama's life and death, the emotional side of human politics, and the illusion of free will. He distinguishes between emotions and feelings, all the while emphasizing the continuity between our species and other species. And he makes the radical proposal that emotions are like organs: We don't have a single organ that other animals don't have, and the same is true for our emotions.

Tremendous book. Give it a listen. Not a waste of time at all. Wish you health and happiness...

Lifetime of work into a masterpiece of a book.

You can tell the amount of research and knowledge that went into this book. it's amazing and sad how science and religion try and put there own touch on the topics touched in this book. I agree with what this book stands for and was touched by it for sure. Amazing book give it a listen 10/10 for me

To Stir the Heart

In Mama's Last Hug, Frans De Waal relates experiences few modern, urbanites will ever realize. Humans are so removed from ever experiencing other species with whom we share our planet that we relegate thoughts, if any, to the most superficial sound bites we may have encountered in our knowledge-impoverished lives.

De Waal shows us how real the feelings and spirits of our close relations are - how necessary their feelings and thought processes are to survival. He also notes some faculties and abilities that leave us in the dust. De Waal's lifelong work and the knowledge gives us enhances our lives and helps us look at each other as well as other species with fresh, open eyes and hearts. I loved this book.

we are closer than we think

very interesting look at the similarities of human emotions and animal emotions. We are not so different!!!
Great narration by L J Ganser too.

You don’t need to be a behavioural scientist to enjoy this book. The author ( and narrator) do an excellent job of illustrating his and others observations so you can make your own conclusions about the parallel between animal and human emotions.
Informative, plenty of humour, shocking and though provoking.
5/5

It took me abit to get used to the narrator, but the content made me stay. Such interesting science!

Just loved it!!! Finally a book, written by a well respected scientist, to open that door, and place a permanent door stop on it ever closing again, to let all societyknow, we are all individuals with open hearts, souls, emotions, love,desires, worries, plans, hopes, dedication, concerns, hate, fear, jealousy, and more. Modern life has blunted our own understandings of ourselves, and Frans is making it clear, that, after all, we humans, who think we are so superior, are not so, not at all! We can learn a lot, if only we open ourselves to the opportunity ! I will now purchase all of his other books as well! JUST LOVED IT, humbling!

"The heart has reasons of which reason knows nothing."

MAMA’S LAST HUG was recommended to me by my father, an environmental engineer who reads … well, not that much. Because of this, I was over the moon excited to get a book recommendation from him, and his recommendation did not disappoint.

This book is for animal lovers everywhere. While it focuses on primates and primate relationships and emotions (including the pivotal primate: us), it delves deep into the emotions (separate and distinct from feelings) of all mammals as well as birds and fish. As a dog lover, I especially enjoyed the bits about our canine companions, and it was interesting to see de Waal’s take on some research conducted by canine behaviorists whose work I’d read (such as Patricia McConnell and Alexandra Horowitz).

Mama’s Last Hug wasn’t all facts and research and science, though. Otherwise, it would probably have been a bit unreadable. Instead, the book hugged the science lightly around anecdotes, including some hilarious stories from de Waal’s years spent observing chimpanzees as well as an entire chapter comparing Donald Trump to alpha chimps (spoiler: the comparison isn’t particularly flattering for The Donald).

What lingered with me the most about this book, however, besides learning all kinds of new information, was the questions about animal welfare it brought to light. We still test products on animals in the United States. We keep chimps in cages, away from their family. We have beagles who spend their entire lives in laboratories, never feeling grass, or smelling the scents of the world. We slaughter animals inhumanely and without much thought. And how do we assuage our guilt and shame over these atrocities? We convince ourselves that animals can’t feel, that they don’t experience pain or terror or curiosity. They live in the moment, we often say about our dogs. They don’t know the difference between yesterday and today and tomorrow. But if Frans de Waal’s research is to be believed, that’s not entirely true. And if it isn’t, it raises some questions we might not like the answers to.

All in all, I would highly recommend Mama’s Last Hug to those who love animals, and to anyone who is interested in the most recent science into the animal (and therefore, human) mind.

I enjoyed listening to this book very much. I was hesitant from reading this in the beginning, thinking it would be a dull science book on emotions. In the contrary I found the book to be very interesting and insightful. I enjoyed the author’s sense of humor at recounting some of the stories and examples. The narrator captures the author’s words so well, I felt I was really listening to the author it self.

I was very frustrated with this book. I really wanted to like it. The author has a lot of interesting information, but he spends an inordinate amount of the book ranting about how naive, ignorant and blind other scientists and professionals are. It's a constant theme throughout.

If you can get past his negativity and judgments of others, then you might like it, but I couldn't finish it. His negativity put me in a bad mood.

The narrator was top notch . The material was well supported and insightful. Logical, rational, and reasonable conclusions. Transparent scientific method. Loved it.

I highly recommend this book. It is so well done. Both in content and narration.

So Good I Bought the Print Version

The truth is, audiobooks are difficult for me because I usually read with a pencil in hand, checking notes and references, marking down questions and ideas. So, it's frustrating to just listen, but I've begun cultivating the practice because I now walk several miles a day, especially to and from my office. It fills the time. But this book really asked for more. While it's delightfully accessible to a lay reader (like me), it raises provocative, intriguing questions for reflection and further research. Charming and inspirational as well as well grounded in contemporary research, I found that as much as I enjoyed listening, I simply need more. But this is a great way into the topic.

More of a text book than a story

This is more of a text book than a story about Mama. The psychology of animals in general is covered extensively in the book and not as much on the life and interaction with Mama. Starts out good but then gets too much like a psychology text book. I was looking for a more endearing story.

Could have done without political opinions

The first half of this book and the very end are worth a 5 star rating. But there is a big chunk in the second half where he goes off on a tangent, trying to connect the dots between animals and his very biased political opinions as if they are facts. It is really distracting and it takes a while to get the gross taste out of your mouth once he finally stops and gets back on track.

De Waal is not only the world’s leading primatologist, but he is also a great philosopher. I say watch his TED talk and get your hands on the rest of his books!