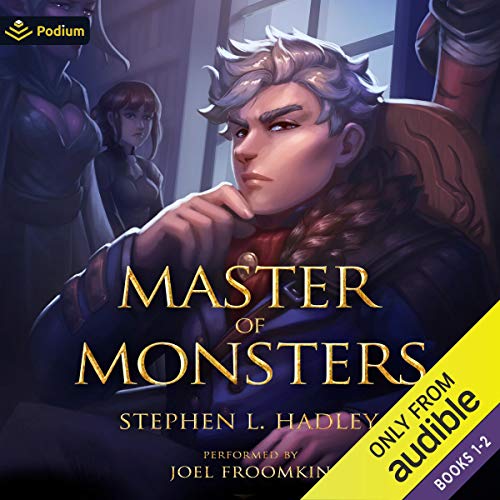 Contains books 1 and 2 of Master of Monsters.

The Isles are a brutal, nasty place and the capital city, Ansiri, is no exception. Its nobility is rife with infighting, nonhuman races are cruelly enslaved, and violence is the primary currency. It's those very things that Baron Leo VanOrden plans to exploit.

The ambitious, young heir to a waning family dynasty, Leo has nothing but time on his hands. Time - and an abundance of opportunities. Because, for all its flaws, Ansiri is a city where anything can be accomplished.

It has been less than a month since Baron Leo VanOrden orchestrated the deaths of his closest rivals. And yet, for an ambitious nobleman, enemies grow like weeds. Unable to rest, Leo is forced to do the only thing he can: Prepare for the next fight.

This time, however, it's not fellow barons he's challenging, but several of the most powerful lords the Capital has to offer. And no matter how many servants, allies, or vaults of gold he acquires, Leo is guaranteed an uphill battle.

Fortunately, Ansiri and the Isles remain a brutal, nasty place. A place Leo is determined to prove himself capable of mastering.

Intended for mature listeners only.

I was expecting a more savvy main.

Winning is not something this MC does allot. He is a victim so often I find it hard to root for him. I was hoping from the summery of getting a mastermind MC but he's more of a lucky to have accomplished what he does. no skills other then when talking to love interests. So not a fighter not a thinker at least compared to any other noble it seems. I'm on the fence with this one.

I went into this blind had some credits to use up, I have listened to 6 chapters so far and 2 chapters were just graphic sex scenes between the "Master" of the house and his human Servant and another with his Ambrosian/Furry "Slave". I thought I would be listening to a chess master play political games but instead I found a shallow pornography.

So here's the deal, great story, crappy MC. Now reread that last sentence and focus on the word CRAPPY, so it's not "terrible". Here's the problem I got with him, you have someone who fancy's themselves as a Light Yagami (Death Note MC). The problem is that this guy is more Bobbity (DragonBall Z). He makes a initial plan which sounds good, but only under the assumption that the target is a total noob, or idiot. He's literally trying to play a "game of thrones" and it little better then high school drama. But what I find most annoying is that he know his biggest and most obvious weakness is his ability to defend himself, and even after getting numerous highly trained people around him he doesn't try to improve himself. What's worst is keeps getting emotional and charging into fights with a clear understanding that he himself is only a burden.
Now with all that out the way, major props to the narrator. He nailed even the female parts without sounding silly. The stories outline is great, but I just think we deserve a better MC then someone who lucks into survival 9 out of 10 times.

the narrator literal quivers his voice for has his acting. its quite annoying. id wait for a different one before buying this.

hard to judge the story I didn't make it far.

I wish I could get a refund! This story was terrible, I’ve never listen/read such a week minded, idiotic, MC. In this book everyone has a brain and ounce of intelligence but the MC. Narration was average. I spend the credit for the political drama, which turned out to be terribly written. The author seemed to run out things to write so he just rambles on for PAGES! I’m so happy, I didn’t spend a credit for books 3&4 publishers pack.

Beyond the Harem Is this a weakness or strength

It’s barely worth the conversation to get back the credit

With these kind of books I can Overlook a few things because it usually has a interesting story or some kind of quirk that makes it unique. I couldn’t get to that part because of lazy riding and because of the narrator. For starters this book does has some mature parts but the narrator is terrible at making female voices and sounds like one of those old porno‘s with a cockney accent.The second is with the book itself does not describe what the character looks like. For example the main character sleeps with one of his maids and they didn’t even tell you what the meat looks like. All it says is that she has short hair. This book is a hard pass. But if you can get past the narrators voice then I suppose you can tolerate this book.

worth reading overall but MC is just too weak, nothing about him stands out. Just wondering who is going to save him next.

Kinda trashy, but the performance, it worth it