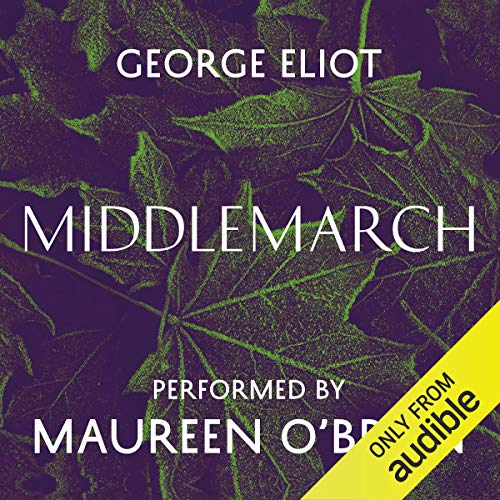 George Eliot's most ambitious novel is a masterly evocation of diverse lives and changing fortunes in a provincial community.

Peopling its landscape are Dorothea Brooke, a young idealist whose search for intellectual fulfilment leads her into a disastrous marriage to the pedantic scholar Casaubon; the charming but tactless Dr Lydgate, whose marriage to the spendthrift beauty Rosamund and pioneering medical methods threaten to undermine his career; and the religious hypocrite Bulstrode, hiding scandalous crimes from his past.

As their stories interweave, George Eliot creates a richly nuanced and moving drama, hailed by Virginia Woolf as 'one of the few English novels written for adult people'. Middlemarch explores nearly all matters of concern to modern life, portraying an entire community and every class within it. Full of irony and suspense and even richer in character it shows how individual lives are shaped by and shape the community. Within Middlemarch, we find Eliot's ability to expand the audience's compassion and imagination.

George Eliot was one of the leading writers of the Victorian era. Her novels, largely set in provincial England, are well known for their realism and psychological insight. When Middlemarch was released Eliot was considered England's finest living novelist with many critics still regarding this novel as the finest in English.

A BAFTA winning adaptation of Middlemarch aired as a television series in 1994.

Maureen is an English actress and author best known for playing the role of Vicki in Doctor Who where she starred alongside the original Doctor, William Hartnell. She then went on to appear in The Legend of King Arthur, Casualty, The Duchess of Duke Street, Taggart, Cracker, A Touch of Frost, Heartbeat and Jonathan Creek. In 1985 she made a rare film appearance in the comedy She'll Be Wearing Pink Pyjamas opposite Julie Walters.

Even better than reading

I love this book. The performance by O’Brien was sensitive and energetic. Her repertoire of accents is impressive. In my mind’s eye I had very clear pictures of all the characters, male and female, old and young. The narrative threads tie together beautifully.

Stellar Performance of a Towering Masterpiece

I came to this reading of Middlemarch having already read it several times, so I knew what to expect. One of the greatest novels ever written. But the performance gave it an unimaginably greater quality. Not one false utterance. it magnifies the genius of George Eliot. in decades of listening to audiobooks, I have rarely if ever encountered such a stellar performance. Worth ilevery penny of your money and every minute of your time.

Gorgeous prose and a tremendous insight into the human psyche! What a treat! Superb narration too!

slow at times, but worth reading

Disappointed: this is not a never-ending story

It's hard to imagine a better reading of Middlemarch. If shopping, read no further.

My third time with Middlemarch and my first with audible. O"Brien's reading made a great book even better. Her vocal characterizations (of which I am, in general, not very fond) were quite good, but even when not "in character" her reading was brilliant.

I read the book as I listened to this narration and I cannot exaggerate how my experience has been enriched to hear every single character given a unique voice, one that was perfectly suited to the personality of the character. This is a masterful rendition of a great treasure of English literature. The artistry of the narration, the sheer number of voices, accents, patterns of speech and idiosyncrasies that the narrator has captured is, in itself, a true work of art. It's as if Ms. O'Brian went to live in Middlemarch to become acquainted with every character very well and then recreated them for us.

One of the greatest novels in the English language

What did you love best about Middlemarch?

Dorothea Brooke is both an original character and as familiar as my own heart. She is a well-educated, upper-class young woman who wants to build a life that is meaningful on her own terms and not by the conventions of society, but she is held back by society's limited view of a woman's role in the world. What else did I love -- the many other complex characters who came alive and who worked out their lives in their own ways -- with or without success.

What other book might you compare Middlemarch to and why?

In bringing a whole society to life and creating characters as vibrant as real people -- Barchester Towers by Trollope, Vanity Fair by Thackeray, any number of novels by Dickens (Great Expectations, Little Dorrit,Our Mutual Friend,Bleak House).

She gave each character their own voice, without making anyone a caricature.

Too long! and too complex. It needed to be savored and enjoyed.

A Town that Thinks Too Much

Middlemarch is an amazing book that portrays a list of characters that seem to get themselves into trouble by thinking too much instead of going with their instincts. Social hierarchy seems to be the factor in the back of every person's mind that decides which romantic or financial turns they will take, at the onset nearly ruining their lives.

Dorothea happens to be my favorite character due to her independence. I was very frustrated with her time and time again, however, whenever she and Will Ladislaw got together and never acted on the love that each knew was present. It seemed that every time both of them got together I was silently screaming to them both to profess their love and lead happy lives, not ones of servitude to others. When they finally did, I knew that all would turn out well for them.

The supposed superiority of men over women was a predominant issue that came back over and over again to nearly every character. Whether it was the disgust of a woman deciding for herself who she should marry, or a wife trying to help her husband financially, each woman was put in her place and their actions were restricted, threatened by the fear of a poor lifestyle. Strangely enough, it was the wives that survived their restrictive husbands, and went on to live happily in the end.

George Eliot (a.k.a. Mary Ann Evans) put together a wonderful conglomeration of social, political, spiritual, and ethical hardships as well as the solutions to such difficulties, and she did so with excellent eloquence. Maureen O'Brien, the narrator, brought forth a terrific performance, with each character clearly understood, even in the most emotional scenes. Very well done!

Read for its humor & glimmers of female rebellion

I enjoyed the parts of this novel more than the whole of it. Taken altogether, this seemed like a story that could have been told in half the pages while still getting across the main points the author was making. The book principally documents the lives of several individuals, each of whom when young believes he or she is destined to do Great Things. Over the course of several hundred pages, the author shows how her protagonists, either through their own poor judgment or because of their place in the social web (dictated by the mores of Victorian society) end up living pretty unremarkable lives.

It is a testament to Eliot’s excellence as a writer that she manages to make these everyday lives interesting. She does this via a delightful cast of supporting characters and witty asides that skewer human nature generally. I found myself smiling frequently and underlining many wonderful passages throughout the book.

But what makes this book worth reading over a century after it was written is the way it shows the first glimmers of rebellion against the way women were brought up, particularly women of middle and upper-middle class status. None of the women in the book are allowed to fully utilize their abilities, particularly their minds, and are for the most part submissive to their fathers, brothers, and husbands. But this submission does not come easily, and each manages to slip out from under the oppression of her situation in her own way.

[I listened to this as an audio book performed by Maureen O'Brien. She did a very good job of giving the characters different voices, but I agree she made several of the women sound extremely childish, which was a bit annoying. Still, she was able to get a good deal of humor into the reading which I appreciated.]

Middlemarch is perhaps the best of the George Eliot books. The stories of the families in this little city are so well told and intertwined in the writing you never feel as though one story doesn't get enough time. Eliot is a masterful storyteller and relies on history, mythology, the current events of the times and even other excerpts from literature to aid her writing. She mixes a good deal of the drama with comedy, pathos, tragedy and a remarkably acceptable ending. I really enjoyed this audio book.

The reader is excellent and is able to differentiate the many characters so well that you always know who each one is when she's reading. It was a very impressive interpretation.

Took a long time to get through but a long time of pleasure.
A very good performance as well. A plus

The best thing about this book is the character development. I felt a compelling attraction and affinity to every somewhat important character. While some were easier to admire, or dislike, or simply laugh at, I felt that I possessed the same traits during some periods of my life. Eliot is possibly the most honest writer I've ever read. She makes no one fit any pre-established mold; each develops as we readers travel along. I thought several times: "Our worlds and surroundings have changed so immensely; our habits of daily life bear no resemblance," and yet, all that is insignificant. People and events are entirely recognizable in my modern world, as well as in Eliot's.

Middlemarch shines as an example of storytelling not often seen among today's best sellers. Character development with few modern equals.

Maureen O'Brien is a great reader. Each character spoke in a slightly different way. The changes were detectable but not annoying.

Although when I started I did not like the characters very much, throughout the book I got used to them and once the book was finished I missed the characters and the spirit of the novel.