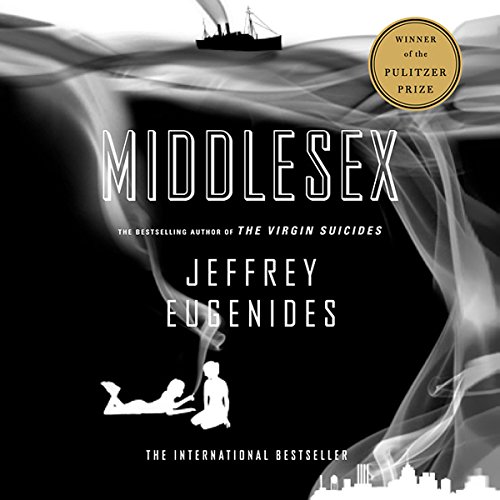 In the spring of 1974, Calliope Stephanides, a student at a girls' school in Grosse Pointe, finds herself drawn to a chain-smoking, strawberry-blonde classmate with a gift for acting. The passion that furtively develops between them - along with Callie's failure to develop physically - leads Callie to suspect that she is not like other girls. In fact, she is not really a girl at all.

The explanation for this shocking state of affairs is a rare genetic mutation - and a guilty secret - that have followed Callie's grandparents from the crumbling Ottoman Empire to Prohibition-era Detroit and beyond, outlasting the glory days of the Motor City, the race riots of 1967, and the family's second migration, into the foreign country known as suburbia. Thanks to the gene, Callie is part girl, part boy. And even though the gene's epic travels have ended, her own odyssey has only begun.

Spanning eight decades - and one unusually awkward adolescence - Jeffrey Eugenides' long-awaited second novel is a grand, original fable of crossed bloodlines, the intricacies of gender, and the deep, untidy promptings of desire.

Winner of the 2003 Pulitzer Prize for Fiction and the Audie Award for best unabridged fiction, Middlesex marks the fulfillment of a huge talent, named one of America's best young novelists by both Granta and The New Yorker.

"Eugenides proves that he is not only a unique voice in modern literature but also well versed in the nature of the human heart. Highly recommended." (Library Journal )

"Not only are his interpretations of the characters astonishingly credible, but his internalization of the narrative is nothing short of amazing." (Publishers Weekly)

"A towering achievement...a story that manages to be both illuminating and transcendent...[Eugenides] has emerged as the great American writer many of us suspected him of being." (Los Angeles Times Book Review)

The Narration was AMAZING!

This book is more salient now, than when I read it the first time years ago. It is an intensely personal story with a host of characters raw and real. The first person point of view, coupled with shifts in time and place, is critical to the stories layers - yet there is never a moment where you think: wait, where are we now? The humour and honesty of the narrator made me smile one moment, laugh out loud, and then want to cry for all of the sadness that was endured. The story is interesting and it simply did not feel as long as it is. I will probably listen again in a few years as it was hard to let go of the story.

Critical to it all: the performance of Kristofffer Tabori is one of the best in the nearly 800 audio books I have in my library. Truly incredible voices he performs; voices that brought the characters all to life.

An epic story of life in 20th century America

loved the story which really captures 20th century Detroit, and anyone who has ever been otherized will relate to this. Shameful that the narrator mispronounced so many of the local Detroit places.

An epic of a story, covering three generations and a few decades, written in an explosive prose, with a unique, distinct, passionate narrator, Middlesex is a profound examination of life, human behaviour and psyche, family, ethnicity, race, crime, religion, history, and many other topics.

This novel is a true treat.

Beautifully written but not pretentious. I especially enjoyed the narrator - he really brought to story to life for me. Hard to imagine anyone else doing it better. The story is even more relevant today.

Worth Waiting It Out

I began listening to the book and about 15 minutes into it I was kicking myself for downloading a bummer of a book.

I thought I had erased it from my reader, but discovered it was still there one day when another book I'd been listening to was over. I was out and about and had nothing else to do so I listened to this one.... and another 30 minutes later I found it starting to grow on me.

That means it took nearly 45 minutes to get into this book, but once I did, I never looked back. I listened to the rest over the next couple of days, not wanting to take off the headphones unless I had to.

If you'd have asked me during the first 30 minutes, I'd have given you a rating of 2. AS it is I give it a rating of 4 and was glad I waited it out.

Not exactly what I expected

I thought this book was going to be about a hermaphrodite. Although it was, the story involving Calliope Stephanides the main character in the book does not really come into play till approximately the last quarter of the book.
Instead, the book is a saga, starting back from Cal's grandparents and their journey out of Europe and to the US where Cal's parents come into play and finally Cal and his brother become part of the book. The journey is a fascinating one and quite enjoyable.
The narrator Kristoffer Tabori did a marvelous job reading and acting out this novel. It was long, but a good story, a difficult subject that was handled well.

I enjoy historical fiction and was interested in the setting of Grosse Pointe Michigan which I have visited. Thirty minutes into the tape I started to doubt my choice but decided to stick with it awhile longer. It was well worth it! Don't let the unusual subject matter deter you. This is a compelling story, beautifully written with an excellent narrator. It will linger on my mind for some time.

Few of the reviews I have read on Audible.com have done justice to this magnificent narrative. "Middlesex", Jeffrey Eugenides second novel, tells the story of Calliope, a male-pseudo hermaphrodite. But the novel does not deal with a narrow political issue or become a polemic and gender or sex. Rather, the novel uses the narrator's peculiar genetic make-up (and Greek ancestry) to boil down humanity and find the common core we all share--love, sorrow, life, and death.

This novel is truly well written. Eugenides has a knack for weaving a fascinating story around historical events and changing social attitudes and customs. The narrative has just the right amount of digression--musing on such topics as race, Greek mythology and the history of Detroit. Though many authors try to use the technique of lingering of the details of a narrative, few succeed, and fewer still are able to make relevant digressions which build on the characters in the story. Eugenides succeeds at this admirably.

Though nearly so, the book is not perfect. There are times when the eccentricities of the characters become grating on the nerves, and times when such oddities seem unrealistic. But perhaps these flaws are meant to add the comic to this modern Greek tragedy. Another flaw, as I see it, of the production is the cheesy music thrown in at the most poignant moments of the narratives.

In all, this is an excellent production, and well worth the time and money. Another bonus is that listeners have the chance to listen to a Pulitzer winning narrative from an author who will likely produce other great novels (if you haven't read "The Virgin Suicides," by Eugenides, you should).

If you listen to this book while driving to or from work beware... You're going to wish you hit a traffic jam. This is one of the best Audiobooks I've ever listened to. At first I thought Kristoffer Tabori was the person who wrote the book. His accents, voices and naration are second to none. And the book itself deserves the best narration possible. This book will leave you laughing an crying. It will make you want to camp out in your car.

I thouroughly enjoyed this novel both for it's content and narrator. I was packing to move, and once I got well enough into it, I lay on the couch for hours listening. Packing my apartment was delayed for three days. Eugenides' painstaking detail and insight unravel one human experience. It seemed as though I were listening to an autobiography. Tabori brought each character alive with distiction. I recommend.

My usual reading fare are mysteries, ie., Harry Bosh, Hercule Poirot, so when I started listening to "Middlesex" I wasn't sure I'd bother even downloading the next two tapes. However, the narrator had a way of capturing my reluctant attention. The interwinding of the past and present was done with such finesse that I barely noticed the flawless seams. The charactors were actually visible in my minds eye even though I did not always care for them. Although it is still not the "type" of book I would probably ever read again, I've found this one to be of excellent quality with superb narration.

During the first few "pages" of this book i thought I would not be able to follow it because of the speed it was being read. Once the story got underway I was hooked. Don't let the suject matter of this book put you off. The charaters pull you into a world of Greek heritage and the lives of immigrants in the states. Any sexual reference is tastfully written. But if you have strong views against transgendered people I don't recomend you read this book. But then again perhaps you should.......

Excellent book. Of course, the reader is what makes it so good. Upon completion of this audio book, you will have received a lesson in Greek history, human physiology, and psychology. It is a little boring at the beginning, but when you get on the boat with yaya and papoo, you will start to experience one of the best audio rides you have ever taken. I've listened to about 100 audio books and this one ranks in my top 10!

Awesome combo of writer and reader

The book is fascinating, well-researched, many-faceted, entertaining, and immensely engrossing. The reader is a prolific actor with an impressive resume of non-starring roles who has an incredible talent for characterization, accents, attitudes, and, especially, effective storytelling. The audio quality is also top-notch. Is this maybe the best audiobook I've ever enjoyed? Absolutely!