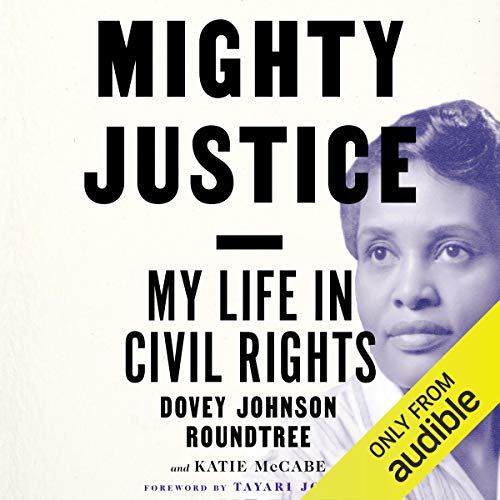 “Dovey Johnson Roundtree set a new path for women and proved that the vision and perseverance of a single individual can turn the tides of history.” (Michelle Obama)

In Mighty Justice, trailblazing African American civil rights attorney Dovey Johnson Roundtree recounts her inspiring life story that speaks movingly and urgently to our racially troubled times. From the streets of Charlotte, North Carolina, to the segregated courtrooms of the nation’s capital; from the male stronghold of the army where she broke gender and color barriers to the pulpits of churches where women had waited for years for the right to minister - in all these places, Dovey Johnson Roundtree sought justice. At a time when African American attorneys had to leave the courthouses to use the bathroom, Roundtree took on Washington’s white legal establishment and prevailed, winning a 1955 landmark bus desegregation case that would help to dismantle the practice of “separate but equal” and shatter Jim Crow laws. Later, she led the vanguard of women ordained to the ministry in the AME Church in 1961, merging her law practice with her ministry to fight for families and children being destroyed by urban violence.

Dovey Roundtree passed away in 2018 at the age of 104. Though her achievements were significant and influential, she remains largely unknown to the American public. Mighty Justice corrects the historical record.

This is a very compelling and extraordinary autobiography by an amazing woman who was a trailblazer in many ways. One of the very best listens I have had from Audible.

I was sad when this book came to it’s end. Well written and read. She has inspired me to do more politically and in teaching my grandchildren. I only wish I had learned of her sooner.

I first heard of Dovey Johnson Roundtree when listening to the serial podcast, Murder on the Towpath which I recommend to readers of this book. The life story of an admirable woman with a strong sense of justice and full of love, her participation in the Army during World War Two was heroic even though she was never posted overseas. I was surprised she only crossed paths with Pauli Murray but she in that time Murray influenced her choice of law over medicine. Dovey lived in Washington DC for many years. My family lived there through the 1960s so I was enthralled by her stories of a time I had experienced as a girl and sheltered young woman. I look forward to the upcoming book circle conversation about this book.

This book is AMAZING!!! I never heard of Ms. Roundtree. This book was recommended to me by Audibles algorithms based on my past reading selection. I almost didn't buy this book but I am ELATED that I did. I have more than 70 books on Audible and I have listened to all of them in full. This is the only book, and I love 90%of my book collection, were I was sad that it was ending. The narrator was EXCEPTIONAL. She made me feel like I was a stranger walking with Ms. Roundtree throughout her life. Ms. Roundtree lived a great life of purpose. It is a shame that she hasn't recieved the notoriety she deserves. If you are on the fence about getting this book please get off the fence, buy and listen to this book. You will be very grateful that you did.

This book was excellent! The story telling was intriguing. The timeline was great. This was a history lesson, an exciting story, an inspirational message, and a call to action. I enjoyed every minute.