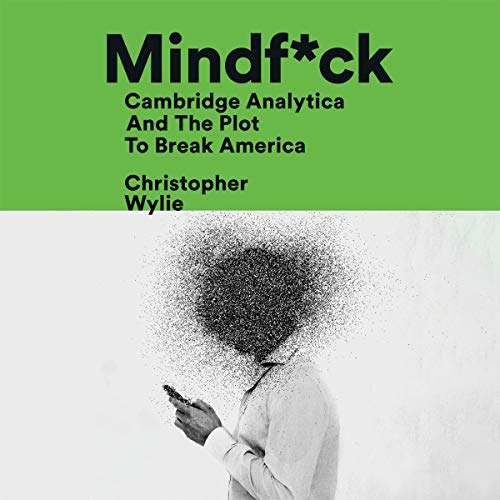 For the first time, the Cambridge Analytica whistleblower tells the inside story of the data mining and psychological manipulation behind the election of Donald Trump and the Brexit referendum, connecting Facebook, WikiLeaks, Russian intelligence, and international hackers.

“Mindf*ck demonstrates how digital influence operations, when they converged with the nasty business of politics, managed to hollow out democracies.” (The Washington Post)

Mindf*ck goes deep inside Cambridge Analytica’s "American operations", which were driven by Steve Bannon’s vision to remake America and fueled by mysterious billionaire Robert Mercer’s money, as it weaponized and wielded the massive store of data it had harvested on individuals - in excess of 87 million - to disunite the United States and set Americans against each other. Bannon had long sensed that deep within America’s soul lurked an explosive tension. Cambridge Analytica had the data to prove it, and in 2016 Bannon had a presidential campaign to use as his proving ground.

Christopher Wylie might have seemed an unlikely figure to be at the center of such an operation. Canadian and liberal in his politics, he was only 24 when he got a job with a London firm that worked with the UK Ministry of Defense and was charged putatively with helping to build a team of data scientists to create new tools to identify and combat radical extremism online. In short order, those same military tools were turned to political purposes, and Cambridge Analytica was born.

Wylie’s decision to become a whistleblower prompted the largest data-crime investigation in history. His story is both exposé and dire warning about a sudden problem born of very new and powerful capabilities. It has not only laid bare the profound vulnerabilities - and profound carelessness - in the enormous companies that drive the attention economy, it has also exposed the profound vulnerabilities of democracy itself. What happened in 2016 was just a trial run. Ruthless actors are coming for your data, and they want to control what you think.

A complex subject that has been very well written and narrated. When you have finished listening to Christopher’s story, you will wonder what every “accept”, “click” and “return” has been/is telling the world about yourself. The usual response is “well if you have nothing to hide you have nothing to worry about”, however, as this story outlines, you (we) all have a lot to be worried about because the wrong people/companies can (and do) completely misuse data.

I had heard the facts that are the content of this book in the media but having it laid out in detail has brought the whole picture into view much more clearly. My perspective as to Facebooks role has changed dramatically. Well written and the narration was great.

This story is incredible and well told. It’s many things, a mindfuck to be sure.

This book should be essential reading in every high school and college. It's a well told story about one of the most important issues of our time.

Will our direction always be for the worst?

Incredible story. Easy to read. Loved it all. Christopher Wylie is a hero and we should be proud to have good humans like him to blow the whistle on what is wrong.

very very interesting book that details the ongoings of Facebook and the lack of control of our own data about our lives worthwhile listening to or reading.

Really gets you thinking about technology

Really enjoyed the book. Kept my interest from start to finish. It makes you question everything you see on social media. Are we are being manipulated by algorithms in our social media apps? You Decide

Should be Required Reading

I thought I had a pretty good handle on this topic but WOW... this is not just a firehose of learning, it's a riveting story
(did I mention WOW?) If you care about your personal liberty and your ability to make informed decisions, read this book.

This story is incredibly compelling and should be required reading for all young adults today. I enjoyed it immensely - highly recommend.

Great and believable insight behind the curtains

A really worthy position that surely will make you rethink your political choices and views.

Amazing insight behind the curtains of the current establishment, Hypocrisy and manipulation exposed to level that for many it will be eyes opening.

And on top of that, the Cambridge Analytica itself, with all the technology to get to you directly. Perfect update for those that are not following the current state of the art for profiling, tracking and marketing.

All that told and read in a cool and relaxed way, even if there are some heavy conclusions behind it.

NOTE: the book is neither too technical nor boring for technology freaks, everyone should find some aspects of it that are mindblowing.

Eye opening. Worth the time & money.

Found this book surprising, thoughtful, unable to put it down, paired with some real shock & fear. I didn’t know what to expect. I’d heard of Wyle via news & I thought I understood the Cambridge Analytica effect but wasn’t excited. Whether due to poor TV news coverage or my lack of aptitude, I found that I knew & understood very little. Really shed light on to 2016 election, Brexit, how this hidden hand will effect all elections going forward, AND threatens democracy & what we call personal choice. Likely in my 3 best books of the year list.

FYI the book has no cuss words nor within but by the end the title is spot on.

This insider tale of Bannon’s, Mercer’s and other Big Money interests’ perversion of a powerful technology to destroy the integrity of the US 2016 and British Brexit elections as well as other elections around the world. But much more importantly, a well-reasoned warning to the World of the power of Technologies like Facebook and Data Mining to tear apart any semblance of Privacy Rights and ultimately of Human Free Will.

If you don’t read the whole book, read Chapter 12! It will change your perception of the role of Social Media in your life, now and in the VERY Near Future!

Frightening and thorough explanation of full scale plot to thwart democracy. We should all understand how the current game of swaying public opinion is being played and this story makes it painfully clear that our individual rights are not a top priority for many who hold great power.

This is the Ida Tarbell book of our time. We’ll be looking back and people will be wondering how we did not see and stop this.
Read and PASS IT ON.

I found it difficult to listen to the author go on and on about Obama. He was so obvious is his love for Obama (chapter 3) that I had to stop listening. The rest of the book was tainted by that chapter. It was great what Obama did with data, but oh my God, Trump is the devil. Too obvious.

The book was great and to the point. It felt more like a sci-fi novel about a dystopian world, but then I kept realizing it is our reality... An important read would be an understatement.

This information needs to be distributed.

You have to remember when listening to this book the story is told from a single point of view. This situation and topic is far more complicated than Christopher Wylie gets into, but it's a good start. My only criticism is that the political rhetoric is a bit off-putting. At times Christopher sounds like a guy that kicked the ball in his own goal, and won the game for the opposite team. He's complaining about manipulation through "team" dynamics, yet he is doing that himself. We need to hire the best person for the job, no matter what team they play for.

He's not the whistleblower, he's the mastermind

Interesting book by a singularly out of touch person. Christopher was a bright guy in his 20s with lots of promise. Instead of doing good with his talents, he allowed his tools to be used to play the world like it was a game. If you're going to read this book to learn more about Cambridge Analytica, be prepared to wade through hours of pitiful hand-wringing, bragging, and justifying by the author. And maybe borrow from a friend so you don't regret padding his pockets like I do

I am not an engineer or even particularly tech-savvy. I am however acutely sensitive to violations of my privacy. We must get a grip on what is at stake and what we can do about it or the very concept of privacy will become a relic.

The only negative comment I have to offer is that it's hard to keep track of who is who when listening. I often listen while on walks and the sheer volume of names of people involved sometimes made my head swim. I need to figure out how to digitally fold pages.

Finished in one day.. RIVETING. TERRIFYING. Told by a man authentically apologetic for his sins.