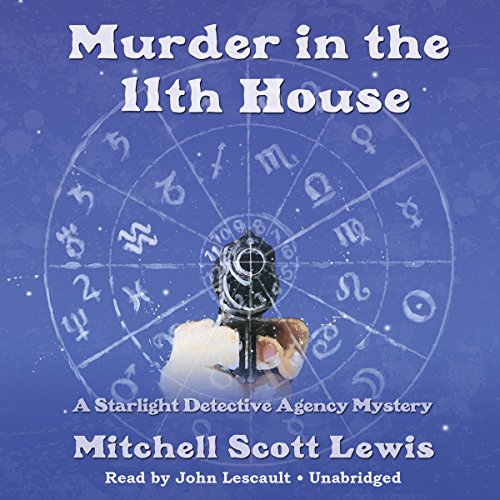 Murder in the 11th House

Murder in the 11th House is the first novel in the mystery series that introduces a unique character in the annals of detective fiction.

Astrological detective David Lowell gets involved in a new case thanks to his daughter, a young defense attorney who believes that a murder suspect is innocent.

A judge has been murdered in a New York City parking garage, and Joanna “Johnny” Colbert, a tough and mouthy bartender, is accused of the crime. Lowell’s daughter, Melinda, believes that her client has been wrongly accused.

To solve the crime, Lowell has the help of his hacker sidekick Mort, office assistant Sarah, and bodyguard Andy, but it is birth charts and street smarts that give Lowell the lead in his race against time. When he sorts through the misdirections of a group of suspects, he traces the crime back to a surprising source.

Mitchell Scott Lewis has been a New York–based professional astrologer for more than twenty years. He is the author of the Starlight Detective Agency series.

"Murder in the 11th House begins a new series that introduces a unique character to the annals of detective fiction." (Gumshoe Review)
"Lewis' winning debut, the first in a new series, introduces New York City detective David Lowell, a highly intelligent, intuitive sleuth who's also an astrologer…. Like Sherlock Holmes, the eccentric Lowell makes deductions that astound or offend those privileged to hear them. Lewis, himself a practicing astrologer, leavens the action with just the right amount of technical exposition." (Publishers Weekly)

I'm happy for the author that the majority of reviews were very favorable...but it just wasn't for me. The astrological component made it much more interesting than the book would have been without it.
The damsel in distress was unlikable. The protagonist was "fussy" & rather inflexible in his views of politics, lotteries & people who buy lottery tickets.The author spent an inordinate amount of time speaking to the "gambling problem"....thank you for the sermon but it doesn't make for entertaining reading in a mystery book.
The book was just interesting enough for me not to return it but I was ready for it to end.

THE STARS WILL TELL

If you could sum up Murder in the 11th House in three words, what would they be?

What was one of the most memorable moments of Murder in the 11th House?

I can't tell as it would reveal too much about the story.

Which character – as performed by John Lescault – was your favorite?

The Astrologer of course!

Can't wait to get his next two novels and listen to them. I have been fascinated with Astrology since I was a child - typical Leo. I wish I could get my chart done by the writer LOL.

If you could sum up Murder in the 11th House in three words, what would they be?

Loved how he brought in astrology, some legal history about it, and the politics of greed/paranoia of the entitled, privileged super rich. Plus his astrology was accurate and enlightening.The story was well constructed and kept me quessing...not predictable like many mysteries.

Just as good, if not better than his previous book. Can't wait for his next one.