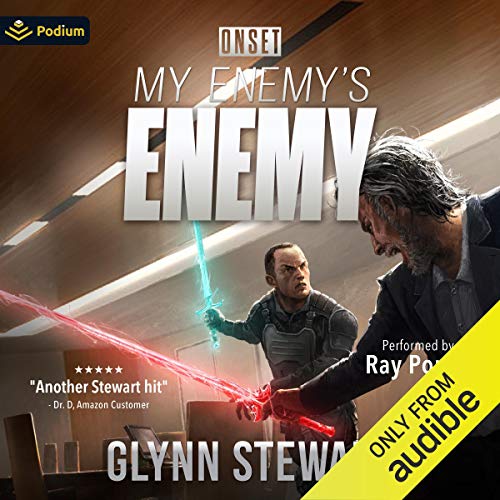 A paranormal agency in tatters. A critical alliance that must not fail. A betrayal in their darkest hour.

The demon Ekhmez ripped out the heart of America’s supernatural defenders and strengthened their foes. The agencies of the Omicron branch of the US government face a newly expanded threat with their resources stretched to the breaking point.

To hold the line, newly promoted Commander David White of ONSET is sent to forge an alliance with the Elfin Conclave, a supernatural organization with its own history, grudges, and politics.

When violence wracks the Conclave and guts the allies they sought, David White must hunt the Elfin’s foes across the Pacific Northwest, taking any help that comes his way - because when the world is on fire, can you turn away your enemy’s enemy?

Another great performance by Ray Porter !

From Joe Ledger to Commander White and everything in between, Ray Porter delivers another excellent performance! Glynn Stewart's writing keeps me wanting more! Although not Glynn's best title in the ONSET Series, this was still very entertaining and seemed shorter than the 9 hrs 9 mins (which is a great thing!)

Having crafted a Mary Sue in the first book the author had to continue the trend in this book. David (the main character) simply is not exciting. The biggest issue is his Prescience power mitigates almost everything his opposition can do. Add in his demon forged blade, his ability to regenerate wounds and there's no tension. Even the few moral quibbles he had in the first book are given a couple of sentences at most before their put to the side.

Ray Porter is my #1 favorite narrator. So just having him reading is going to give the book a great chance of being excellent. I don't know what it is about this series but it hooked me right away. I went through it in only a couple of days because I didn't want to stop listening. I highly recommend the series and I do hope that there are more coming.

Once again Glynn Stewart have proved that he got excellent imagination and style.
Ray Porter narration was perfection.

I have absolutely nothing bad to say about this audiobook only that I fully recommend it for all.

Well, I have to admit that in this go around for this sort of story line we stuck to so called regular creatures. I have noticed that in other series of this sort we suddenly transition into not so much going after supernatural creatures of myth but into the realm of fighting against some sort of god from another world out to destroy this one. It gets a bit over the top, but this one so far is sticking to the original precept that the series started on. Good Job.

I have enjoyed the book and the series! It is a fun story and nice characters to cheer for!

He has kept it going great !!!

Glynn Stewart has kept the store fun and exciting so much so I’m buying book three right after this review.

Supernatural heroics with a human heart

Ray Porter is one of the greatest for narrating. For that alone, you should get this book. Combine that with the ONSET storyline and you get a action packed 9 hrs. It's a little short for my normal buys but it's a fun ride for all 9 hrs.

not quite as sophistaced as Glynn"s other series, but just as fun. smooth plots thaf keep moving forward at a nice pace.