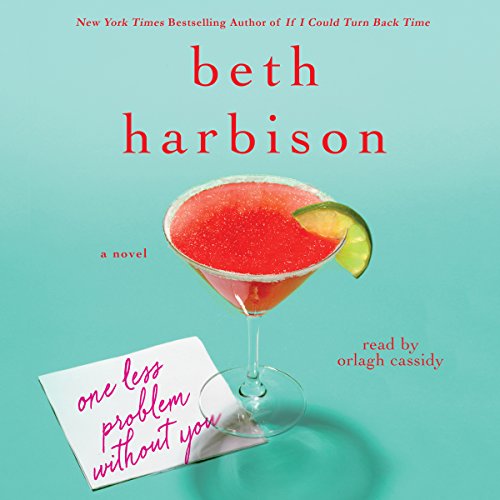 One Less Problem Without You

Meet Prinny, Chelsea, and Diana. Prinny is the owner of Cosmos, a shop that sells crystals, potions, candles, and hope. It's also a place where no one turns down a little extra-special cocktail that can work as a romance potion or heal a broken heart. But Prinny is in love with her married lawyer, and she'll need nothing short of magic to forget about him.

Chelsea works as a living statue at tourist sites around Washington, DC. It's a thankless job, but it helps pay the rent. That and her part-time job at Cosmos. As her dream of becoming a successful actress starts to seem more remote and the possibility of being a permanently struggling one seems more realistic, Chelsea begins to wonder: At what point do you give up on your dreams? And will love ever be in the cards for her?

Diana Tiesman is married to Leif, a charismatic man who isn't faithful. But no matter how many times he lets her down, Diana just can't let him go. She knows the only way she can truly break away is if she leaves and goes where he will never think to follow. So she ends up at Cosmos with Leif's stepsister, where she makes her homemade teas and tinctures as she figures out whether she'd rather be lonely alone than lonely in love.

In Beth Harbison's One Less Problem Without You, three women suddenly find themselves together at their own very different crossroads. It will take hope, love, strength, and a little bit of magic for them to find their way together.

This book just never gets off the ground. Lots of name dropping (locations, designers, musicians), stereotyped nasty man, wimpy parents, love-struck girl, cheating spouse. There is very little depth to any of the lead characters. You want to cheer for them, but there is just not enough substance. And come on, why does an adult man have any say in his sister's business affairs when there is no background of mental problems? And Prinny visits her lawyer/business manager every week? Come on! But I did listen to it all the way through. I really liked the narrator.

Worst of her books

I have loved every other book by her, but this one was really pretty bad. If I had been reading it instead of listening, I definitely wouldn't have made it through. The story jumped around too much, the primary characters were really under developed, and I couldn't even remember who the secondary characters were. I was glad she attempted to stray from her normal storyline, but this was not done well. I was also disappointed that the narrator couldn't pronounce "digoxin" correctly. Overall disapppointing.

Another great book by Beth Harbison, great twist at the end. The narrator, Orlagh Cassidy one of my very favorites, always makes the characters come alive. Keep them coming👍

watch out you guys out there.

Excellent story. I have enjoyed all of Beth Harbison's books so far. I love her humor and her mysteries. The characters that she develops in her books are always fascinating . The narration by Orlagh Cassidy is wonderful. I could listen to her voice forever.

Not my favorite Harbison

I enjoyed this book, but definitely not one of my favorite Beth Harbison books. Parts seemed to be a knock-off of Big Little Lies. Orlagh Cassidy was great as always.

I like how their lives are intertwined. I was sad in a few spots and sand wanted smack the man but in the end a little bit of evil makes you feel good

This story had great bones and potential, but not quite as much meat as I'd have liked. It seemed to end quickly. Even though you see the end coming/hope for certain things to happen, I wish it could have been drawn out a bit better.

I like the strong female characters, the story is darker than her others. The ending was interesting.

This wasn't what I expected...

I'm disappointed. The book was not what I expected. I like that Beth Harbison uses Orlagh Cassidy for every book. It's an excellent fit. I just didn't like the storyline...

And the characters were on the wrong side of believable. Names from a Gaga song.