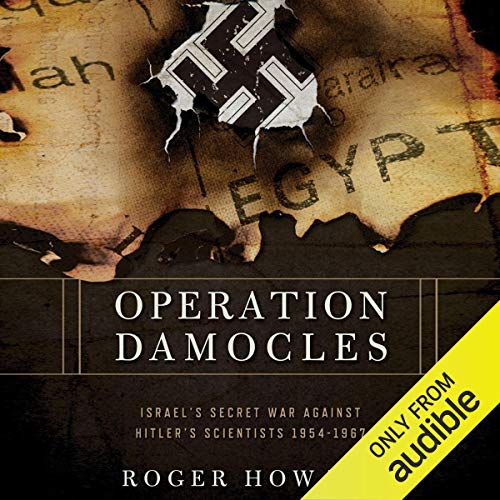 Journalist Roger Howard put together this account of the fascinating true story of Operation Damocles, Israel’s clandestine efforts to end Egypt’s missile program. Through arms dealers Gamel Abdel Nasser, Egypt hired West German scientists to develop its long-range missiles program in the late '50s, early '60s. Israel’s secret service, the Mossad, took out a policy of intimidation and assassination attempts against the scientists with former Nazi ties that cost Israel face but in all likelihood ended the program. Ray Chase, in a biting baritone, gives a hard-hitting performance of this material that tells a shocking and intriguing piece of historical espionage.

The forgotten cloak-and-dagger history of the former Nazi scientists who were recruited by Egypt to develop long-range missiles capable of striking Israel.

From 1951 to 1967 Egypt pursued a secret program to build military rockets that could have conceivably posed a threat to neighboring Israel. Because such an ambitious project required Western expertise, the Egyptian leader President Nasser hired West German scientists, many of them veterans of the Nazi rocket program at Peenemünde and elsewhere. These covert plans soon came to the attention of Israel’s legendary secret service, Mossad, and caused deep alarm in Tel Aviv. Would Israel fall under the shadow of long-range missiles held by a ruler who was sworn to destroy the Jewish state? Could the missiles be fitted with warheads filled with radiological, chemical, or even nuclear materials? Israel responded by using threats, intimidation, and brutal assassination squads to deter the German scientists from working on Nasser’s behalf. Exactly half a century later, this book tells the gripping story of the mysterious arms dealers, Mossad assassins, scientific genii, and leading figures who all played their part in Operation Damocles.

Please Get To The POINT!

I don't mind long stories. Honestly I enjoy them. But I've never listed to a story that would take 10 hours to get nowhere!. I listened to it, hoping Isreal would do something. But they really don't do anything. There is literally no action in this story. None! So if you want to spend 10 hours of your time just to get to that point, then I recommend this story to you. Enjoy your listen.... and a Waste of a Credit

Exciting and useful for today

Stranger than fiction. Better than any spy novel. Helps assess Israeli and Egyptian mentality. Would recommend to any one interested in Mideast.