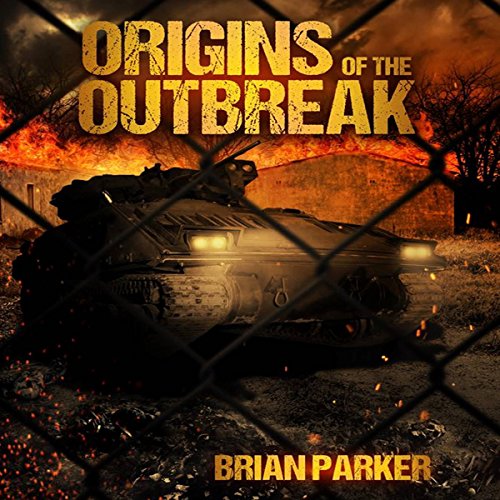 Every epidemic begins with a relatively small group of people who've been exposed to an illness. The Centers for Disease Control believes that it is imperative to reach the site of an initial outbreak as quickly as possible in order to prevent further spread of the disease. Sometimes that isn't always possible, and events reach a catastrophic tipping point before the government can organize a response.

Origins of the Outbreak follows the chain of infection from one person to another after a university researcher in a small Texas town unwittingly develops a disease that turns its victims into zombies and threatens to destroy the world as we know it.

Told as a series of short stories from the perspective of each victim as they experience their own version of hell while struggling to survive, Origins will leave you gasping in fear.

This book was given to me at my request and I am providing a voluntary review:

It is impossible to hate this book. There are so many different characters and they are all so different. If you dislike one guy, two pages later, its something else completely. I know that it sounds like it would get confusing, but it doesn't. It all works. I'm a big fan. I am like 80% done with the book so I cant speak to its ending yet, but since I was here, I figured I'd write something. Awesome Book and Amazing narration. I hope to read more from this author.

Great look into how a zombie outbreak would spread

Excellent look into the various perspectives of different people at the beginning of an outbreak.

The multiple short stories were great, and seeing characters return as zombies for future stories was hilarious.

"This book was given to me for free at my request and I provided this voluntary review."

Really liked this book! Spoiler alert!!! Love that almost everyone dies that come into contact with the zombies!!! You don't see that to much in these books! Lots of action , just non stop! Narration Was on point , great job. Great book to add to your collection!

Origin of the Outbreak. .
Another great book from this author. Plenty of blood and action. Narration is clear and perfectly in tune with this Zombie outbreak,
I received a free copy of this audio book at my own request and voluntarily leave this review. .

This is multiple vignettes from the start of a zombie outbreak from one of the authors of the Five Roads to Texas series. Very enjoyable listen! I loved the multiple points of view from each story. So glad I got to listen to and enjoy this early book of Brian Parker. Narration was also good. I received this for free for an honest review.

You must like zombies to enjoy the book which I found interesting as it was stories in stories of each character’s exposure to the virus as it starts in Texas. It is very descripted and gory but fun listen. It is an early book from author and highly recommend his Five Roads to Texas series and Washington Dead City series. I was given this free review copy audiobook at my request and have voluntarily left this review. Thank you!

I've listened to probably hundreds of zombie books and this one has a unique way of telling the story. You don't get attached to the characters, because it's dozens of short stories. It's told in real time, like 1:00 p.m., 5 minutes is spent on this character and how she becomes infected.....1:05, here's 10 minutes with a new character and how he gets infected......1:15, 15 minutes with another character........10:00, here's 10 minutes with a new character and how she gets infected by character #2 from earlier. At first, I was a little weary of this style, because I couldn't get invested in the characters. Half way through, I loved it! By the end, I had found a new favorite author! Oh, the narrator did a fantastic job also.

As with all short stories, some are better than others. Granted, these short stories show how the zombie outbreak spread throughout region/state. I thought the narrator was a little monotone when telling the stories which made it more difficult to enjoy the stories. I was given this free review copy audio book at my request and have voluntarily left this review.

Not my cup of undead!

Numerous vignettes examining classes and professions of people on how the apocalypse affected individual lives while describing the ultimate spread of the infection. Not one of my favorites from Brian Parker. I prefer more substance in my novels; something I can get into rather than a bunch of short stories. Three.point.five. I was given this free review copy audiobook at my request and have voluntarily left this review.