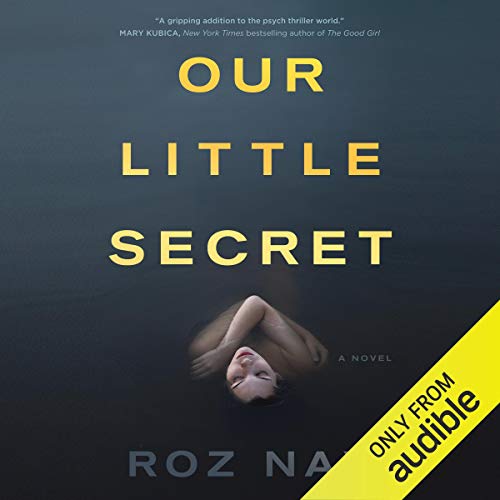 For fans of In a Dark, Dark Wood and All the Missing Girls comes Our Little Secret, a compulsive and thrilling debut about a missing woman, a tangled love triangle, the secrets we keep, and the secrets we share.

The detective wants to know what happened to Saskia, as if I could just skip to the ending and all would be well. But stories begin at the beginning, and some secrets have to be earned.

Angela is being held in a police interrogation room. Her ex's wife has gone missing, and Detective Novak is sure Angela knows something, despite her claim that she's not involved.

At Novak's prodding, Angela tells a story going back 10 years, explaining how she met and fell in love with her high school friend HP. But as her past unfolds, she reveals a disconcerting love triangle and a dark, tangled web of betrayals. Is Angela a scorned ex-lover with criminal intent? Or a pawn in someone else's revenge scheme? Who is she protecting? And why?

Twisty and suspenseful, Our Little Secret is an intense cat-and-mouse game and a riveting thriller about the lies we tell others - and ourselves.

What a terrible ending to a juvenile story

I found it very hard to be sympathetic to the characters, especially the main one. The story was juvenile at best and the ending was the worst. It was like the author didn’t know how to end this mindless plot.

I couldn’t finish the first chapter, suspending disbelief became too difficult. The narrator is supposed to be confiding in a detective, speaking implausibly with all of the contrivances of a teenage romance. Unrealistic relationship between the two main characters...gimme a break.

I wouldn't recommend this book really. it was predictable for the most part and I found the narration to be robotic.

I was on the edge of my seat from start to finish. I just couldn't shake the sense of unease with LJ all the way through and felt like I was taking this journey with her. Looking forward to listening to more from Roz Nay.

good book. not too long, good for the drive. didn't drag on. recommend this book

Started it, did not like it at all. Not my sort of book. Do not buy

heartbreaking, tender, mysterious. enjoyed every second of this book. Takes a while to get going but its really just laying the groundwork for a stunning story.

Great storyline. Well written to keep the reader intrigued all the way to the very end!

NO SECRET:   OUR LITTLE SECRET Gets 5-Stars!

Sshhh.....OUR LITTLE SECRET is amazing and impossible to put down. In addition to being a riveting psychological suspense novel about jealousy, betrayal, obsession, a missing woman and a toxic love triangle, the book was also a poignant coming of age story, too.

Roz Nay's style is strong and clean and her decision to unveil the entire storyline through a detective's interrogation of the main character intensified the book's level of tension.  The book's ending was very, very abrupt, and left me jolted.   I usually do not like books with abrupt endings but the author made this ending work and kudos to her for accomplishing such a difficult feat.

The book's narration was excellent and I especially liked the Australian accent that the narrator used when necessary.

This is my second Roz Nay book.  I discovered Roz Nay through her most recent "Hurry Home" book read by Hillary Huber, one of my favorite narrators.  (I frequently find new authors through narrators!) It's interesting to note that I am usually very stingy with my 5-star reviews and Roz Nay earned 5 stars from me for both of her books!  Thank you, Roz Nay, for the great reads!

Boring book with no substance. This book is totally a waste of time. I would never read anything from this author.

This book has me on the edge of my seat from the start. I was rooting for Angela and HP the whole way and kept waiting for what I hoped to be their reunion. I give it stars all the way around despite being disappointed by the ending. I would have preferred a different outcome.

Juvenile in every way

This really read more like a juvenile fiction story and was not what I expected! I felt it necessary to leave a review for this reason. Please know that the plot centers around teen-age characters transitioning to young adults. The protagonist is whiny and completely unlikeable, as are many of the shallow characters in this book. Since the story is told as the protagonist’s flashback, there is an element of anticipation of a ‘great reveal’; however, it falls flat and is quite unremarkable. I was VERY disappointed in the ending.

I really enjoyed the storyline at first. However as soon as it picked up and we headed to the end and to the crux of the book it just ended quickly...I was disappointed there wasn't more to the story. Who is "our" I think the title is really misleading.

Didn’t care about the characters, or their story.

I kept waiting the story to get better. It didn’t. Too much focus on the past where nothing happened. Then we finally get to the future and we’re about to find out what happened and it’s over.

This story had me on the edge of my seat. I couldn’t believe the ending. I played it back twice to see if I had missed something.

I really enjoyed the story, but not so much the ending. I was hooked, and could not stop listening. the performance was amazing, and I totally enjoyed the book more because of the great reader. Overall, I recommend the book, but be prepared for a little bit of a let down for the ending.