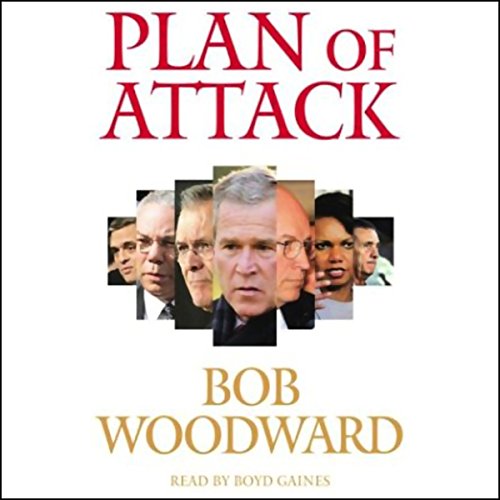 Plan of Attack is the definitive account of how and why President George W. Bush, his war council, and allies launched a preemptive attack to topple Saddam Hussein and occupy Iraq. Bob Woodward's latest landmark account of Washington decision making provides an original, authoritative narrative of behind-the-scenes maneuvering, examining the causes and consequences of the most controversial war since Vietnam.

Based on interviews with 75 key participants and more than three-and-a half hours of exclusive interviews with President Bush, Plan of Attack is part presidential history charting the decisions made during 16 critical months; part military history; and part a harrowing spy story as the CIA dispatches a covert paramilitary team into northern Iraq six months before the start of the war.

Plan of Attack provides new details on the intelligence assessments of Iraq's alleged weapons of mass destruction and the planning for the war's aftermath.

"A serious book it is, instantly essential, matching America's most celebrated political reporter against the most secretive administration in our history. For once, a hyped product has lived up to its billing....Plan of Attack offers by far the most intimate glimpse we have been granted of the Bush White House, and, better still, a glimpse of the administration's defining moment: its war of choice against Saddam Hussein." (The New York Times)

This is a well written and interesting book, well worth the read. I was amazed at the books subtle tone which allows neo-conservatives to see a strong president taking charge and knee-jerk liberals to see a detached simple-minded bumbler. As I read, I was astounded that the Bush reelection site would be pushing this book (it seemed to present Bush in such a poor light). So I would read the passage again and find that, with a neo-conservative mind set, the same passage could be read as a ringing endorsement of the President. Amazing writing. The down sides are the book is way too short and covers way to little. It barely gets going, and it is over.

I've never read any of the author's previous books, but was surprised at how little analysis or personal opinion/perspective was offered by the author. He clearly was the ultimate reporter, just reporting the facts as he heard them. I guess I was hoping for some more editorial comment from someone so inside the beltway. Having said that, I did find it incredible that our president didn't seem to ask anyone of his cabinet if we should go to war. He just followed his "gut". A little scary. I'd hate to think all his major decisions are made with so little outside input.

This book gives you the impression that you are a fly on the wall during very important discussions and decisions. This book confirmed my belief about the VP's role in the Iraqi invasion. Its over 7 hours, but it is so engaging that you will not want to stop listening.

abridged, but better than nothing

I don't know how much is lost in abridging the book, but it sure does jump around a lot. As others have said, this book will back up your preconceived notions of Bush. Either he is a decisive leader who pushes the country forward or a goof-ball who never saw a fact that he couldn't ignore. Either way you will find this book to be quite educationational. I just wish we could hear the whole book.

Simply put, it is not very interesting. All that is said in the book has been written about in newspaper articles. Maybe it were different if they published an unabridge version, but they didn't. I look forward to reading it, and found it did not add much to what I've already known. It is beyond me how anyone sees the book as flattering to Bush and his adminstration.

I saw all the news shows with Woodward and he seemed so critical of Bush. His book does not come off like that. If he has a problem with anyone it is Cheney. After 9/11 everyone screamed about why we did not connect the dots. Now that we are trying to connect the dots the very same people are screaming that we are trying to connect the dots. If Franklin Roosevelt had to fight WW II with our current press he would have been impeached for the " War atrocities " of Dresden, Hamburg, Hiroshima, and Nagasaki.

Woodward is a great reporter. He could put together a mean deck of Trivial Pursuit cards on politicals, but he can't tell a story. In many cases, he doesn't seem to grasp what he's actually recording. The White House recommended this book because Woodward often seems to miss the point of the facts he's reporting. And when he does, he assumes you will grasp the full thread of implications, too. As a result, the shocking things he does report about the malfunctioning executive branch fails to cohere into a truly telling narrative.

Serious political junkies will find some gems of insight that fill out other's adventures in Bushworld, such as Richard Clarke's or Paul O'Neil's books. For the average reader, the damning material falls flat. For the adoring fans of the president, they will see the resolute words and dote on the detailed unfolding of the war plan. By the time they get done saluting, they've forgotten the parts that might disturb their hero worship.

Useful as the last read on the subject of the Bush administration, useless as a primer.

Bob Woodward takes the reader into a behind the scenes look at how short sided vision and goals are manipulated by hawkish bureaucratic politics and technocrats of the Washington system. Outlines personal agendas, strengths and weaknesses of the Bush administration.

Great behind the scenes telling of events

Bob Woodward gives us the thoughts, opinions, points of views and interactions between the major individuals involved in the run up to the Iraq War. I never got the impression that Woodward was trying to spin his own views on these events, just the facts. It made me feel like I was there. Definitely recommended for those interested in politics and international affairs!!

Bob Woodward is one of my favorite writers. He really gives an in depth perspective on the Bush Administration and what all was going on leading up to the Iraq decisions. He calls it like it is, but he seems fair at the same time.