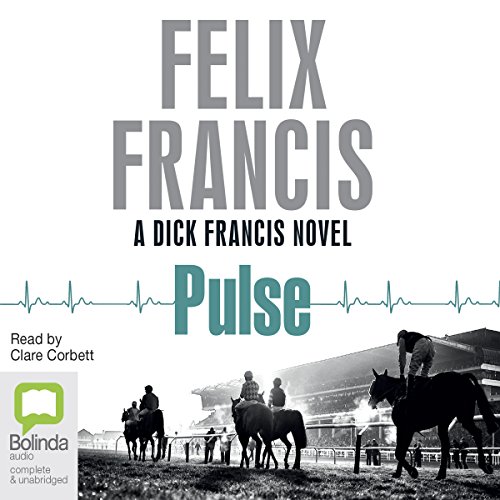 With the stakes so high, racing can be a deadly business...best-selling author Felix Francis' latest thriller!

Chris Rankin is a doctor, a specialist in emergency medicine at Cheltenham Hospital, but a doctor who also has health problems.

A smartly dressed man has been found unconscious at the local racecourse and is rushed to the hospital, where he subsequently dies. But who is he? Where does he come from? He had no form of identification on him, and no one claims the body.

Doctor Rankin is intrigued by the nameless dead man, obsessed even, and starts asking questions. However, someone doesn't want the questions answered and will go to any lengths to prevent it, including attempting murder. But no one else believes that someone tried to kill Chris, leaving the doctor no option but to discover who the nameless man is and why he died, preferably before following him into an early grave.

I had no sympathy for this character. The more I listened the less I liked her. She was extremely irritating and made the most ridiculous decisions. It was so bad I didn’t finish the book. I have never given such a bad review. I DO NOT RECOMMEND.

Another Hit From Felix Frances

A little different theme this book but well written and exciting to the end. It focuses on the emergency medical field and throws in a little bit of mental health issues.

Not as good as usual

Felix is unfortunately not in the same class as the original Dick Francis. Latterly the stories have contained too much important fact and that gets boring. The trademark Dick Francis was &quot;catch them with the first sentence&quot; followed by action, short sentences and a thrilling climax. This book had a lot of academic information which was quite convoluted and somewhat boring. The narrator irritated me beyond measure, she was too little girl prissy for a woman heading into her 40s with a responsible medical position, I cant imagine her kicking anyone anywhere but I guess she had to try. But, I generally dont like female narrators, they have difficulty with male voices (as did this one).

Would you try another book from Felix Francis and/or Clare Corbett?

I so far read all other books from Dick and Felix Francis and they were all excellent and page turning but this one sounds like a third rate wanne be author decided to write a D&F Francis story and did a miserable job. I am still surprised this one passed any literary agents' desk without being thrown away. I had to fast forward a lot but after more than two hours it did not get better. If you like reading about depression summarized by an fiction author I recommend this one - if it turns into a crime - I do not know because I gave up. And if I want to read about depression I pick up a well rated non-fiction book from audible and get a professional view on things. I found it very frustrating.

Would you ever listen to anything by Felix Francis again?

Most certinly since nearly 50 excellnt books turn a completely different story - I enjoyed all of them and always longing to get the next one. Well, even the best amongst us have once in a while a bad day.

Would you be willing to try another one of Clare Corbett’s performances?

No, not at all. I did not like her performance at all. There might be genres for which her voice might be good but she is defintely on my "not to hear again" lists. But with voices, that is a rather subjective matter and thus I suggest to look at different reviews of her performance.

Absolutely disappointment and anger about having wasted so much time with it and a little bit of sadness that Felix Francis put this on the market - all his other works alone and together with his father are great, thrilling page turners.

I am still looking forward to buy the next one from Felix Francis! As I stated before, just a bad day.

better than I expected!

I was a bit unsure if I would like this one as it's a departure from the usual Francis formula. Ended up enjoying it more than I thought I would in the end though. I'd recommend giving it a go